Plus, Al Horford is listed as questionable for his return to Boston on Thursday night 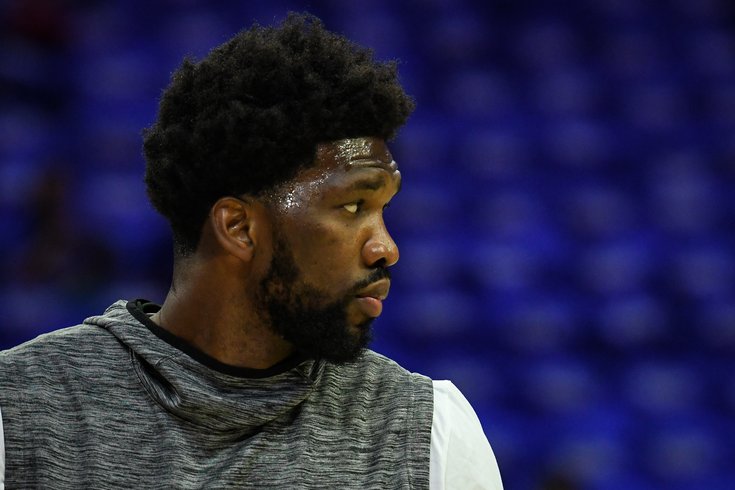 Joel Embiid came under fire from NBA Hall of Famers Charles Barkley and Shaquille O’Neal for a supposed lack of aggression on the offensive end following Tuesday night’s win over Denver. Asked about their thoughts at Thursday’s shootaround, Embiid said he believes they are right.

What does “more aggressive” actually mean for Embiid? That’s a bit harder to pin down.

Consider the following: Embiid is the league’s leader in post-ups by almost two full possessions per game, and the only player who posts up on a higher percentage of their possessions is Boban Marjanovic, the immobile big man who had a spell in Philadelphia last season. The only players drawing fouls on a higher percentage of their post-ups do so with limited reps — of the top 20 players in free-throw frequency out of post-ups, Embiid is the only one who uses more than 3.5 possessions per game on that play type. He uses eight per game.

The mandate to “be aggressive” comes off partially as a demand to, well, “be better.” And certainly, Embiid’s raw production is not as good as it has been in years past. But with post play tougher than ever and the NBA cracking down on hard on the use of off-arm fouls by offensive players, there is a ceiling to that style of play as it is.

The Sixers, of course, have also built a team that isn’t really structured to bring the best out of Embiid individually. Teams have put pressure on him to beat them with his passing, rather than with his scoring, and the results have been mixed from night-to-night. Walking the line between hunting his own shot and playing smart team basketball has been a challenge, and the goal at the end of a long season ultimately is what drives Embiid.

“I want to get to the playoffs healthy. The last two years I have not been healthy, two years ago it was my face and last year it was my knee and I was sick,” Embiid said. “We got a new group, I’m still trying to get used to it. It’s different, it’s completely different. The way I’m being guarded this year, every time I touch the ball [there are] heavy double, triple teams, I’m just trying to navigate through it and be a basketball player.”

Whether it’s finding joy, playing aggressively, or simply putting more sensible lineups around Embiid, unlocking his best is perhaps the key to Philadelphia’s title hopes. They are less reliant on him to win than they have ever been, which is a good thing, but when things get tough in the playoffs, it’s a sport that hinges on how high a level your stars can reach. Embiid is the brightest one they have in Philly.

Al Horford is questionable for his first return to Boston since leaving the Celtics in free agency this summer, the Sixers said on Thursday, as the veteran big man deals with left knee soreness and left hamstring tightness.

The Sixers were made aware of Horford’s issue on Thursday morning before shootaround, and a team spokesman said they are currently treating it as a minor issue. Horford will test his readiness during pregame warmups on Thursday night, when a final determination will be made on his status for the matchup with Boston.

Though his fit alongside Joel Embiid has been janky at times, Horford has been an essential part of the success of Philadelphia’s second unit as their long big man. Minutes the Sixers were losing when Embiid would hit the pine in years past are now tilting heavily in Philly’s direction, with Horford fitting perfectly alongside Ben Simmons.

“I think he is gifted intellectually hoop-wise. He really has an experience and an intellect base that you talk at high levels with him,” Brett Brown said before Tuesday’s win over Denver. “He comes with a respected history, and now that I see him and the questions that he asks and the things he points out, he’s a student of the game. I think that he’s gifted on that side of it.”

The Sixers are now the beneficiaries of all the intangible qualities Horford has been praised for dating back to his days to Atlanta. Coaches say they often arrive at the practice facility early to get their days started and find Horford has already beaten them there, showing up ahead of his teammates to put in work with personal coaches. With more pressure on him to make outside shots than ever before, Horford is committed to getting it right.

And when Philly needs someone to speak up, Horford is not bashful. During games, you often find him pulling players aside and talking after missed assignments happen to hash things out, and Brown says that spills over into the film room.

“I think he’s completely comfortable in his own skin, when we have team meetings that are private, he can speak his piece,” Brown said Tuesday. “He doesn’t feel like he’s throwing anybody under the bus, he delivers it with a proper respect and tone, includes himself in stuff, and I just feel like there’s a tremendous adult, there’s a compass in the locker room as it relates to, what’s our true north? Al gets it, he gets what’s most important at this stage.”

This game against Boston, by the way, is quite important for Philadelphia. The Celtics have surprised with a strong start to the season, and the Eastern Conference has been tougher than many anticipated heading into the year. A win over Boston on Thursday night would be a boon for Philadelphia, who could clinch at least a tie in the season series should they beat the Celtics on Wednesday.

One key factor will be the availability of Gordon Hayward, who returned to the lineup for the Celtics this week but could find himself back on the injury report Thursday night. Midway through the fourth quarter of Wednesday’s loss to the Indiana Pacers, Hayward suffered a blow to the head from Doug McDermott and was removed from the game.

Hayward told reporters in Indiana he felt dizzy following the blow and went through NBA concussion protocol, and there were reportedly no symptoms of a concussion following early testing, but he was expected to undergo further evaluation upon their return to Boston.

According to the 1:30 p.m. injury report, Hayward is listed as probable.

In any case, the Sixers have a good opportunity to get a win over the Celtics with a rest advantage over their division rival.