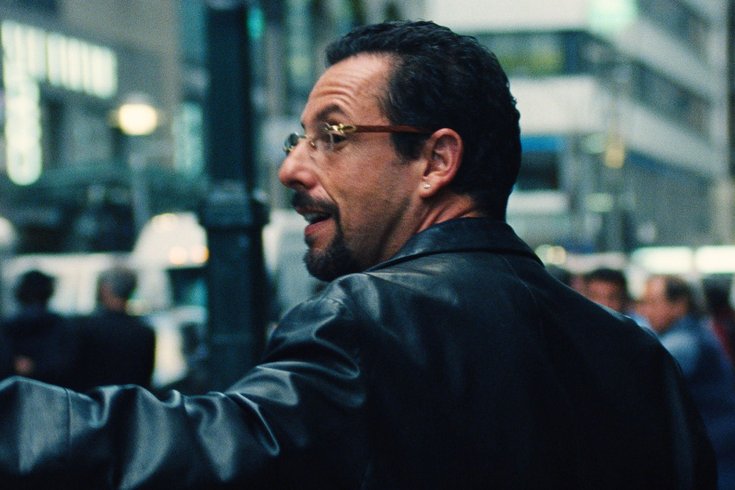 It was reported last week than when indie filmmakers Benny and Josh Safdie were planning their new film, "Uncut Gems," they seriously considered Sixers center Joel Embiid to play himself in the film. However, once it became clear that Embiid couldn't film during the NBA season, the filmmakers opted instead to give the main basketball player role to retired star Kevin Garnett.

Even so, the 76ers still play a part in the film, as its fictional plot is set entirely against the real backdrop of the Eastern Conference semi-finals playoff series between the Sixers and the Boston Celtics that took place in May 2012.

"Uncut Gems," which opens in Los Angeles and New York on Friday before arriving in Philadelphia theaters on Christmas Eve, has gotten rave reviews and even some awards buzz. The film stars Adam Sandler as Howard Ratner, a New York-based jeweler to the stars. Constantly juggling multiple hustles at a time, and owing money to various bookies, pawn shops, and auction houses, Howard comes into possession of a rare gem, dug up in Ethiopia. His customer Garnett, who was a Celtic at the time, comes to believe the gem will bring him good luck.

The film, due to the Safdies' immersive style and the high stakes of the plot, is one of the more intense cinematic experiences you'll have this year, one dramatically different from the broad Happy Madison comedies with which Sandler is most associated.

In addition to Sandler and Garnett, the eclectic cast includes Idina Menzel, Eric Bogosian, Lakeith Stanfield, and even New York sports radio mainstay Mike Francesa. But the main thrust of the plot consists of a series of gambling parlays Sandler's character makes on that 2012 Celtics-Sixers series.

"Uncut Gems" uses a small amount of actual game footage, which the Safdies admitted  toThe New Yorker they had grabbed without permission. The film also visits what it depicts as the bowels of the Wells Fargo Center in one scene, although it doesn't appear to have been filmed there. There's also a mention of Elton Brand, who at the time played for the Sixers and is now their general manager; Brand, himself a sometime movie producer, was spotted at a couple of Philadelphia Film Festival screenings back in October.

If you've been a casual Sixers fan for the last few years, you'll remember the team being consistently mediocre for that long stretch of between the decline of the Allen Iverson-led teams in the mid-2000s and rise of the current, contending Embiid/Ben Simmons team. But it's easy to forget that in 2012 – just more than a year before the team hired Sam Hinkie and began the extreme tanking expedition known as "The Process" – the 76ers actually made a surprisingly competitive playoff run.

In the 2011-2012 NBA season, which had been shortened by a lockout the previous summer, the Sixers posted a record of 35–31, which earned them the 8th and lowest seed in the Eastern Conference playoffs. The team, coached by Doug Collins and led by a nucleus of Andre Iguodala, Evan Turner, Jrue Holiday, Lou Williams, Spencer Hawes and Thaddeus Young, upset the top-seeded Chicago Bulls in the first round.

The victory over Chicago would be the Sixers first playoff series win since 2003.

While that 4-2 series win was undoubtedly assisted by injuries to Bulls stars Derrick Rose and Joakim Noah, the Sixers gave favored Boston a fight in the second round. Spoiler alert for the movie, but the teams alternated victories throughout the seven-game series, with the Celtics ultimately prevailing in Game 7 and advancing in the Eastern Conference Finals.

After that, the Sixers' road to the Embiid era began. Three months after the series from "Uncut Gems," they traded Iguodala in a four-team deal that landed them Lakers center Andrew Bynum, who never played for the team because of injuries. The following spring, Collins resigned, Hinkie was hired as general manager, and The Process was on. Embiid was drafted in 2014, Simmons in 2016, and after years of losing, injuries, and controversy, the team finally returned to the playoffs in 2018 … where they once again lost to the Celtics in the second round.

Yes, there are places where "Uncut Gems" strays from realism. The Mohegan Sun casino in Connecticut, for example, did not have a sports book in 2012. And it's hard to imagine an athlete as intense as Kevin Garnett making multiple trips to do important business in New York, in the middle of a playoff series between Boston and Philadelphia. But everything in the basketball series happened in real life as it did in the movie – minus the part about the Ethiopian gem, of course.

Even though he didn't end up in "Uncut Gems," Joel Embiid is one of the funniest people in sports, and it's not hard to imagine him starring in movies one day – a buddy comedy starring him and Kevin Hart, as we argued a couple of years ago, practically writes itself. But until we get that, we have "Uncut Gems," which depicts a Sixers moment that was only seven years ago, even if it feels like a lifetime.

Correction: The article originally included the wrong local opening date for the movie. "Uncut Gems" opens at theaters in the Philadelphia area on Tuesday, Dec. 24.