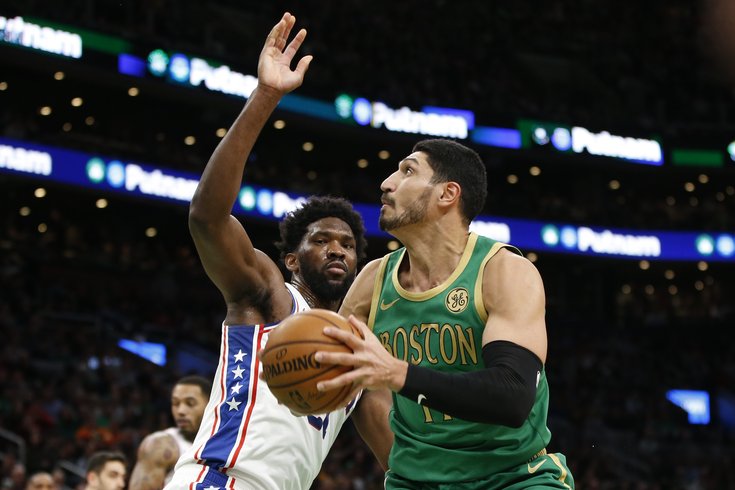 Philadelphia 76ers center Joel Embiid spent the last two days hearing about everything he wasn't doing, and he went out and responded with a statement performance, carrying the Sixers to a 115-109 victory over the Boston Celtics with 38 points, 13 rebounds, and six assists in his best game of the season so far.

• The basketball universe somehow spent two straight days on the monumental analysis of, "Joel Embiid needs to be more aggressive" from Shaquille O'Neal and Charles Barkley. Instead of coming out and jacking up a billion shots, Embiid did exactly what he is supposed to do against modern defenses — take what's there and move the ball when teams bring pressure and doubles, only asserting yourself when the path to the rim is clear.

It would be more satisfying to a lot of people if we still lived in a world where Embiid could just bury some poor schmuck in single coverage every time down the floor. There are moments when Embiid is able to do that, and he certainly takes advantage. It's more important that he does exactly what he did against Boston early on, drawing their help defense and then hitting open shooters for easy threes.

Embiid's two best assets on Thursday night were his patience and his willingness to establish early position, even on plays where he was just getting in the mix for an offensive rebound, not necessarily to body Daniel Theis or Enes Kanter on the low block. He has to be the guy advocating for and earning his touches on the low block, and he was excellent in that regard against Boston. That didn't stop him from doing everything else that makes him a special and complete big man, with Embiid nailing a pair of crucial triples and assessing Boston from the face-up position throughout the night.

And by the way, this guy is still one of the best defensive players on the planet. When the game was on the line late, he blocked Daniel Theis into next week, putting an exclamation point on a sensational performance.

Joel with the tough block to secure the W! 💪 pic.twitter.com/CNvSjCh7rb

If that's the product of "aggression," then sure, sign me up for more of that. The Sixers need that version of Embiid all the time, whether Barkley demands it or not. The public asked for a response, and he delivered one. That's what the great ones are supposed to do.

• The offensive numbers were ugly early for Tobias Harris, but I will go out on a limb for him after that game. I think he continued to show the defensive improvement he has flashed all season, creating some key turnovers with active hands, and he kept attacking even though the results were not there for him early. That last part has been a big development for Harris lately, who has refused to let tough starts take him out of the game on offense, a tendency that limited his impact during last year's stretch run.

Being a go-to scorer for a contender doesn't mean blindly jacking shots regardless of the results. It does require measured aggression at all times that Harris has been better at channeling, and to do so on a night where the Sixers made it a point to play through Embiid is really important for their long-term hopes. Everyone knows Harris is a multi-faceted scorer, but he hasn't always carried himself like the sort of guy who has the stones to lead them when times get tough.

Well, he has been that guy lately. Give me this version of Harris, and I would live with the results. He used his strength advantage over Jayson Tatum to create some good looks for himself around the basket, and when that wasn't working, he hit a variety of tough shots from the mid-post, probably his favorite area to set up shop. And he came up with a bunch of assists on top of all of that, using the attention he received against Boston's defense. Excellent game.

• Mike Scott has no chance to join the starting lineup of this team on a full-time basis, but he sure does seem to relish the role he has when he plays with that group. The Sixers simplify the game for Scott in a big way, and he gets to do what he does best — fire away from deep.

But he has that opportunity no matter which lineup he plays with, so the important thing is that he was actually making those looks on Thursday night. He was a critical floor spacer on those Embiid post-ups early in the game, and once Scott sees a couple of looks drop, it's off to the races. They needed his spark badly with Al Horford on the shelf.

• It was not like the loud games he has played at home recently, and I'm not here to tell you Matisse Thybulle played a good overall game in Boston. The Celtics picked up some cheap points against the rookie in the first half, and Thybulle continued to struggle against Kemba Walker at times in the second half, who is great at turning your bad habits against you.

But I am willing to call that a positive experience for the young man. Taking a rookie on the road, especially to an environment as hostile as Boston, can be an adventure. But these reps are really important for Thybulle, who is going to have to deliver under a lot more pressure starting in mid-April. Games like these are huge for his development, and the Sixers will benefit later from riding the roller coaster now.

• We'll get to the bad part of Ben Simmons' night below, but great job to nail pressure free throws with the game on the line. Brad Stevens clearly didn't respect him much at the line, so great job making him pay.

• The Sixers have guaranteed at least a head-to-head split with the Boston Celtics with that win, which may end up being a big deal for seeding down the line.

We talk a lot about Simmons' lack of a jumper and how it impacts the Sixers, but if you want to avoid the perimeter as the team's 6-foot-10 point guard, you damn well better take advantage of the cross matches you get that you can punish inside. Simmons had Kemba Walker on him on a couple of different possessions in the first half, and he didn't even make an attempt to establish position and post him up, wandering aimlessly through the lane. That does worse than nothing for the Sixers — it walls off the paint for anyone who might have an interest in getting to the basket.

Brad Stevens does an excellent job scheming against Simmons and creating a wall of defenders to stop him, but that heightens the importance of the possessions when Simmons has a matchup advantage. And Simmons wasn't good when he did put in the effort to exploit those advantages, missing some easy-ish looks around the basket that he really should be finishing.

Here's what I'll say though, and it's something we probably don't touch on enough — different teams have varying degrees of success against Simmons and Embiid. That doesn't mean when one guy has a good stretch that it's "Simmons' team now!" or vice versa. These guys need each other to win a title, and getting there doesn't necessarily mean both are going to look elite at the same time.

• The drop-off from Al Horford to Kyle O'Quinn as a backup center is significant. And that doesn't necessarily mean O'Quinn is bad big man, but he's much more reliant on the pieces around him than Horford, who can be a good defense basically on his own.

Philadelphia did not offer him much help in the first half. The Sixers struggled to find the right matchup for Matisse Thybulle early on, with Jayson Tatum dusting him and Kemba Walker using his worst habits against him. O'Quinn is great on the back end when perimeter guys do a competent job funneling drives toward him, he just doesn't necessarily have the necessary agility to put out fires.

He's also just not a great fit for units anchored by Simmons. Put him in the game with a lineup with guys who can space and move, and his passing becomes a lot more valuable.

• The Sixers needed more from Josh Richardson on Thursday night, and once again, we can excuse his rust a bit in the days following the layoff. There were definitely some good spurts for Richardson, who gave Gordon Hayward some trouble on both ends on a night where he was pretty good, but he is very clearly still getting his legs under him.

In any case, the Eagles could use a guy who can get away with pass interference, so maybe they should give Richardson a call.

• Marv Albert is a legend, but he and Chris Webber are a broadcast crew spent straight from hell. The elder statesman hardly has any idea what's happening half of the time, and Webber seems very certain about certain things (e.g. the Sixers' substitution patters) that make it seem as if he has never watched them play. Embiid didn't get subbed out early because he's tired, he was subbed out because that's when Brown always removes him from the game.