For the first time since he was fired back in 1995, Adam Sandler returned to the 30 Rock stage 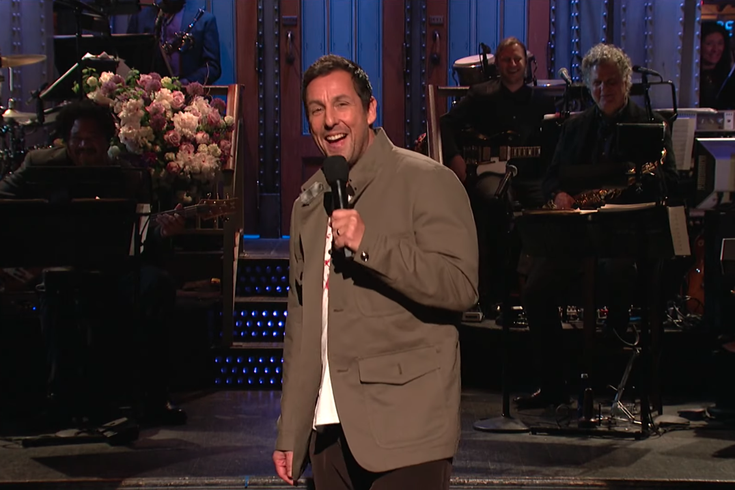 Adam Sandler returned to 30 Rock to made his hosting debut on the May 5 episode. Shawn Mendes was the musical guest.

Legendary actor and comedian Adam Sandler made his hosting debut on "Saturday Night Live" this week, after the show took a two-week hiatus and prepares to wrap up season 44.

"I tried to call Lorne Michaels but he never called me back," Sandler sang in a parody song of his firing.

He was joined by Chris Rock and Pete Davidson (who wasn't actually fired) in the song during his opening monologue.

Sandler popularized many different bits and sketches on "SNL," like Opera Man, Canteen Boy, "The Thanksgiving Song" and "The Chanukah Song" — some of which made return appearances for his 2019 appearance in 30 Rock.

Opera Man was one of Sandler's most beloved characters, so he returned to "Weekend Update" with Michael Che and Colin Yost. Opera Man sang about the week's biggest headlines, including Game of Thrones, the Kentucky Derby, Kevin Durant and the Knicks, the movie "Long Shot," and the presidential candidates.

"We can't wait for final show-ah so we can cancel our HBO-ah," he sang of GoT.

To wrap up the night, Sandler did what he does best and pulled out his guitar to sing a tribute song. It was a heartfelt tribute to his late friend Chris Farley, who was an "SNL" cast member at the same time as Sandler and his good friend. Farley died of a drug overdose at 33.