Paul Hagen: The Phillies are better, but still not better than their NL East competition 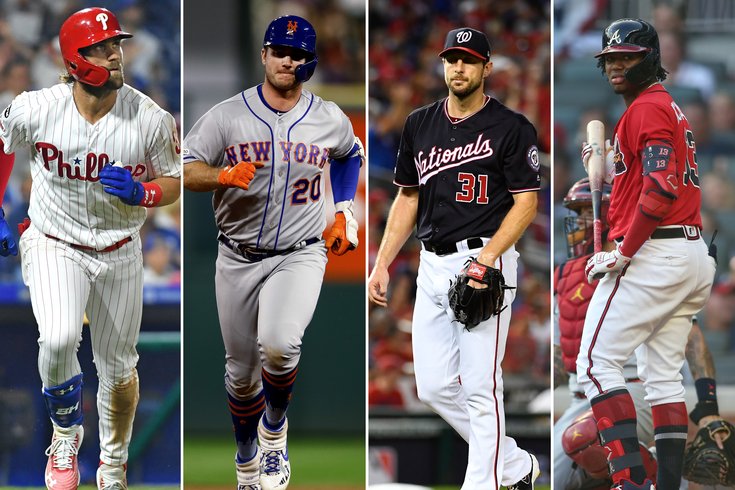 Bryce Harper, Pete Alonso, Max Scherzer and Ronald Acuna are just a few of the stars in what's shaping up to be a loaded NL East.

It’s the most wonderful time of the year.

And so, with holiday music playing as a prelude to the festivities, the Phillies unwrapped two new shiny objects for their fans down at Citizens Bank Park on Monday.

Righthander Zack Wheeler and shortstop DiDi Gregorius were on hand, along with general manager Matt Klentak and manager Joe Girardi, to have their pictures taken in their new (sponsored) jerseys and say a few words. A timeless ritual.

The attention was split pretty evenly between the free agent acquisitions, but what was most striking was how bullish the front office reps were on the impact Wheeler will have on a rotation that, everyone agrees, was the root cause for last season’s disappointing fourth-place finish.

“We feel really good about our rotation, where it’s headed," Girardi said. "I’m really excited. I think it’s going to be one of the strengths of this club and we’re going to rely on them heavily.”

Because the manager made it clear that, after veterans Wheeler and Aaron Nola and Jake Arrieta, he’s counting on significant contributions from Zach Eflin and Nick Pivetta and Vince Velasquez. Now, Girardi wasn’t here last season. But Klentak was and surely remembers that he’s been roundly criticized in these parts for betting (largely unsuccessfully) on that trio.

Leaving the door ajar to adding another starter, and stepping nimbly around the question of whether he has the latitude to exceed the luxury tax to do it, the GM talked about how putting Wheeler at the front of the rotation can have a positive ripple effect toward back and how competition between the three for two open spots can be helpful and how the organization still believes in their stuff and how much confidence he has in new pitching coach Bryan Price.

Here’s the question, though. Even if all that is true, where does this Phillies Top 3 realistically rank in the National League East?

The defending division champion Braves may have lost Julio Teheran and Dallas Keuchel but signed Cole Hamels to add to Mike Soroka (who was 13-4, 2.68 with a 1.111 WHIP, finished sixth in the Cy Young voting and is still just 22 years old) and Mike Foltynewicz (a 2018 All-Star who is looking for a bounce back year) or Max Fried or Sean Newcomb.

The Mets lost Wheeler. But they still have Jacob deGrom and Noah Syndergaard, who pitched ahead of Wheeler, and midseason pick-up Marcus Stroman. And they’ve reportedly signed Michael Wacha and Rick Porcello.

So, again, how do Nola-Wheeler-Arrieta stack up?

Senior advisor Larry Bowa has more than a half century of baseball experience. “I’d say right now, talent and depth-wise, Atlanta. I like them. Washington. They’ve done it,” he said.

He also has good feelings about what the Phillies can become. . .and bases a lot of that on what he expects from Eflin, Pivetta and Velasquez.

“Stuff-wise, they have what it takes to pitch in the big leagues,” he said. “But you’ve got to carry that stuff out on the mound. And they didn’t do that last year. Well, Eflin did (at the end). Like they said, the three guys at the top take a lot of pressure off the bottom if Arrieta’s healthy. I know that’s a big if, but I think he’s going to be. It’s a tough division.

“There’s no question (that the Phillies first three starters can’t automatically be rated above the three teams that finished ahead of them in 2018.) But potentially we can match up. You don’t win with potential. You’ve got to go out and do it.

“But I think they’re going to pitch better. I really do. I see Pivetta’s stuff. I just think he needs to get untracked. I’ve always liked Eflin. And I like the top three guys. Velasquez, it depends what they want to do. You need depth. Guys get hurt.

“I don’t call it lightning in a bottle. To me, that’s a miracle. But I think if these guys just grow a little bit they’re going to be fine. I really do. I was with Price in Seattle and he has a way getting the most of out his pitchers.”

Now, while we’re on the subject, here’s a position-by-position opinion on where the Phillies rank in the division.

These are necessarily a subjective snapshot that can change, abruptly and without notice, once the season starts. Or even before. At the same time, while there’s always hope for improvements, we’ve learned by now that the more time a team says “if” at this time of year, the more uphill the season is likely to be.

Rhys Hoskins, coming off an unproductive second half, is behind Atlanta’s Freddie Freeman and NL Rookie of the Year Pete Alonso and his 53 home runs.

If Jean Segura ends up replacing Cesar Hernandez, even at his best he’s no better than runner-up to Atlanta’s Ozzie Albies.

Washington’s Trea Turner is the leader in the clubhouse. If Gregorius comes all the way back from the Tommy John surgery that caused him to miss the first 61 games last year, he could take over the top spot.

Too early to tell. Will Josh Donaldson go back to Atlanta or sign with the Nationals? Will the Cubs trade Kris Bryant and, if they do, will he end up in the NL East? We don’t even know for sure if the Phillies will go with Scott Kingery here.

Washington’s Juan Soto is clearly the best and Jeff McNeil (.916 OPS, 5.0) WAR had a terrific year for the Mets. Whether Andrew McCutchen can be considered above Nick Markakis of the Braves depends on how he comes back from ACL surgery.

Adam Haseley is still a blank slate. Based on experience alone, though, on Opening Day he has to catch up with Victor Robles (4.1 WAR) of the Nationals and Ender Inciarte of the Braves.

Bryce Harper is really good. So is Atlanta’s Ronald Acuna Jr. Call it a coin flip.

It sure didn’t feel like it at times, but the Phillies bullpen had the second-best ERA (4.36) in the division in 2018. Given the volatility of relievers from year to year and the number of changes that can be expected between now and the start of the season, it’s almost impossible to make an educated guess here.

It all adds up to this: Wheeler and Gregorius make the Phillies better. Right now, they look like a team capable of contending for a wild card spot that will need to a) Make at least one more impact move or b) Have a few things go right to exceed that.