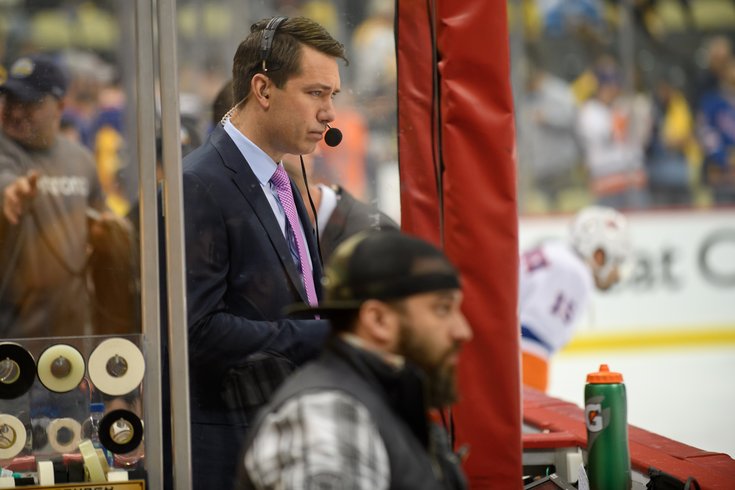 Former Flyers' goalie Brian Boucher has taken to broadcasting like a natural.

His arena ceiling was a blue sky so bright it hurt the eyes to look up. The nearby trees, parked cars, and wooden fences that enclosed the family’s Woonsocket, Rhode Island, ranch were his bleachers and imaginary fans. It was a place where his legs and mind could roam, where as an 11-year-old, Brian Boucher would announce fantasy hockey games by himself in the driveway.

On occasion, Brian, the youngest of four, got caught talking to no one by his parents peeking out the door. They would laugh, then shake their heads as they retreated back into the house.

Boucher always dreamed of reaching the NHL, which he did as the Flyers’ first-round pick in the 1995 NHL Draft, the start of a career that spanned 13 years in the NHL and included three separate stints with the Flyers. Little did “Boosh” know at the time that his imaginary hockey games would lay the foundation for what he currently does, as the “Inside-the-Glass” and studio analyst for NBC Sports Group's coverage of the NHL on NBC.

Prior to being an NHL TV analyst, Boucher, 42, had no previous broadcasting or media experience. He says with a laugh that his formal media training began by dealing with the tough Philadelphia media during his playing days with the Flyers. Boucher sporadically would think ahead about a career in broadcasting. As a goalie, he had a unique perspective of the game. He could share that insight to fans.

In 2013, as Boucher’s playing career was winding down, his relationship with NBC Sports Philadelphia president Brian Monahan, whose kids played ice hockey with Boucher’s in South Jersey, proved helpful. Monahan told Boucher to give him a call when he was finished playing, which is exactly what Boosh did. That opened the door. Next thing Boucher knew, he was in front of a camera doing pre- and post-game shows on Flyers’ telecasts on then Comcast SportsNet.

But this journey has been gradual. Boucher had rough edges to level.

From there, Ron Hextall, former Flyers’ general manager, stepped forward and hooked up Boucher with the new ownership of the Lehigh Valley Phantoms, who Boosh teamed with play-by-play announcer Steve Degler as the color analyst. Boosh graduated to the NHL Network, and since 2015 has been with NBC, breaking through this season to join NBC’s lead NHL broadcast team of Mike “Doc” Emrick and Eddie Olczyk.

Boucher’s hockey acumen has innately been there. Though, it becomes quite different when trying to articulate what’s happening on the ice in real time behind a mic for millions.

What’s amazing is that Boucher has made it work with little to no training.

I remember watching games with my dad and I would openly say what was going on. Though, it’s a lot easier seeing and breaking down the game sitting on a couch with your dad...

“I always loved the game since I was a kid,” said Boosh, who was on the Flyers’ 2010 Stanley Cup final team and still holds the NHL record for the longest shutout streak by a goaltender, holding the opposition without a goal for more than 332 minutes during a five-game span as a member of the Phoenix Coyotes during the 2003-04 season. “I used to sit and watch a ton of hockey with my dad as a child. When you watch it enough, you subconsciously hear how other people see the game. I grew up in a heavy Canadian-American area. I think the way I see the game is natural, from years as a goaltender.

“I remember watching games with my dad and I would openly say what was going on. Though, it’s a lot easier seeing and breaking down the game sitting on a couch with your dad, being a Monday morning quarterback, than it is when you’re right there in the moment. I think that’s where it actually came from, I watched a lot of hockey.”

He was the kid yelling at the TV, a Montreal Canadiens diehard growing up in Rhode Island, a Boston Bruins hotbed. Any slight of Canadiens’ Hall of Fame goalie Patrick Roy would send Boucher into a rage.

“Maybe that’s where my opinions started, swimming upstream against all of the Bruins’ love,” said Boosh, the father of two who’s moved back to Rhode Island from South Jersey, and whose son, Tyler, is an aspiring rising teenage star. “I was a junior in high school in 1993 when the Canadiens won the Stanley Cup and that was the greatest spring of my childhood. [When I turned pro] I got to play with two of the guys on that team I idolized, John LeClair and Eric Desjardins. Between 11 and 16, that’s all I did was watch and play hockey.

“I’m the youngest of four, and the next oldest to me was my brother, who was six years older. He didn’t want to play with a little kid, so like most kids, I would play games on my own. I would announce the games and occasionally get caught by my parents, and that gave them a chuckle, wondering if I was okay. It was just me painting a picture and perhaps creating my path to the NHL.”

Among Boucher’s most influential mentors were former Flyer announcer Bill Clemente, and one of his former Flyer teammates, and current Flyers’ and NBC national NHL analyst, Keith Jones.

“Well, No. 1, Boosh can put a sentence together, and he played a position that gave him a great view of the ice,” Jones said. “There are a lot of goaltenders that do a very good job analyzing the game. There is actually a long list of goalies who are great at doing it. I think you have to have a certain level of hockey intelligence, and Brian has always had that. He’s also well-spoken and he’s honest with the viewers.

I like where hockey is today. My son is 16, and a young, aspiring player. I see how strong the youth side of it is. It’s a popular game with young kids, but it’s still a niche sport.

“That’s a great combination to have. Boosh gathers his thoughts and quickly relays that to the viewer. Fans want their own thoughts reinforced. As analysts, we have to over-simplify and not over-complicate what the viewers see. Brian does a very good job of that. He speaks intelligently, without overwhelming the viewers with complicated hockey jargon. That’s really important. I try to view a game like a young person growing up, watching a game with family and friends. What was important to me then is still important to the fans today.

“I told Brian to not let the opportunity slide by, and repetition makes you better. That’s what Brian did. He never let any opportunity slide by, and by being there and getting repetition, he’s become very good at it. I want to see Brian do well, but what makes this job so great is that it’s a similar environment to when we played. We’re all teammates. Being a good teammate, and helping other people who are trying to enter the field, makes you feel good when you’re helping your teammate excel.”

Boucher confesses he still gets nervous before games. He was self-critical as a player, and it’s an attitude that he still carries. In a sense, he says, he’s still a goalie, sans the pads and stick. He wants to work on his interview technique and be more concise in crossovers. Get in, and get out. It’s a feeling-out process that he continually hones.

But, Boosh also admits, there is a twinge of bias to a particular position on the ice.

“I see the game from the eyes of a goaltender, and I don’t want to sit here and defend the goaltenders all of the time, but there are certain things that I’d see that fans may not when a goal is scored that could have been a tough play for a goaltender,” Boucher said. “Maybe someone else may see it as a ‘bad goal,’ when the puck was deflected.

“I like where hockey is today. My son is 16, and a young, aspiring player. I see how strong the youth side of it is. It’s a popular game with young kids, but it’s still a niche sport. The game has grown and there are players who are playing in the NHL from Texas, Florida and New Jersey. We’ll see expansion in Seattle and there are a lot of opportunities for young kids to make it. It’s all positive stuff. I like where the game is.”