What they're saying: Is this year's Flyers team actually a contender? 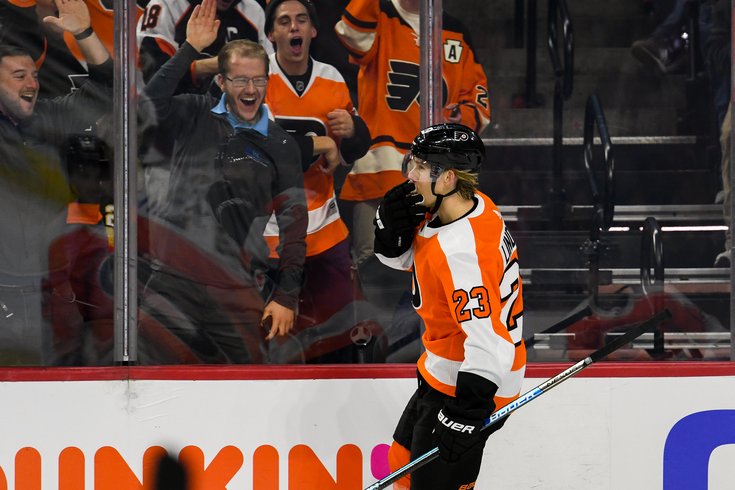 It was just two weeks ago that the Flyers, looking like another meandering, middle-of-the-road version of themselves, were blown to bits by rivals the Penguins 7-1. Things weren't looking great.

In the six games since, Philadelphia has gone 5-0-1, has won back-to-back games via the shootout, and has played itself back into the top three in the division, holding a playoff slot if the season ended today. According to the oddsmakers at betonline.ag, the Flyers have already increased their Stanley Cup title chances from 33-1 to 20-1.

Of course, the season doesn't end today — it doesn't end for several more months. But experts across the hockey landscape are seeing something special in South Philly this year.

Things have started to click, the consistency that has lacked for nearly a decade is starting to settle in and for the first time in ages, true optimism looks to be running rampant among Flyers fans.

Here's a brief look at what they're saying about the Flyers in the midst of a stellar stretch of hockey:

This is a good team

The Flyers didn't beat just anyone over the last two weeks. They have handled quality opponents, defeating the top three teams in the Atlantic Division (Boston, Montreal, Toronto). Here is more on the team's apparent ability to rise to the level of competition of their opponents from The Athletic's Charlie O'Connor:

Suddenly, it feels right for fans to be excited. And while the Flyers nearly reached that point after their 7-4 comeback win over the Columbus Blue Jackets on Oct. 26 — don’t forget, following that game, they arguably had the best advanced stat profile in hockey — they failed to stick the landing. This time, they responded to a three-game winning streak in style, dominating the Atlantic Division-leading Boston Bruins for two periods, then hanging on in the third for a guaranteed point despite clearly running out of gas on the second night of a road back-to-back (and fourth game in six days), and then nabbing the extra point in the skills competition.

This wasn’t an easy week. Carolina is probably the best play-driving team in hockey. Montreal isn’t too shabby in that area, either, and will be in the mix for a wild-card spot this season. Toronto is still one of the most skilled teams in hockey (and had John Tavares and Jake Muzzin back for this rematch). Boston was one win from winning the Stanley Cup in June. Yet the Flyers didn’t just defeat those clubs; they also narrowly carried play against them, generating 53.13 percent of the expected goals and 50.86 percent of the shot attempts (after adjusting for score effects) during the four-game stretch. Simply put: This is a good team, playing good hockey against other good teams. [The Athletic]

According to hockey-reference.com, the Flyers currently have a 60.6% chance of making the postseason. The always fantastic and insightful Dave Isaac (from the Courier Post) is fine with giving the Flyers their due for what they've accomplished during a shirt stint of success, but notes that the true measure of a team's playoff fathomability is yet to come:

It’s Nov. 11 and the Flyers are in a playoff spot. Ask again in three weeks because Thanksgiving has traditionally been the more important indicator. Since the 2005-06 season, 75.5 percent of the teams that were in a playoff position at U.S. Thanksgiving were still there at the end of the season.

The Flyers have bucked that trend three times in the last six seasons, but it hasn’t been good enough. They haven’t won a playoff round since 2012 and that lost postseason revenue is why things are so expensive down at Wells Fargo Center despite a team that hasn’t done very much winning the past few seasons.

So for the Flyers to be in a playoff spot now, even after only 17 games, raises the question of whether they’re a legitimate force. The short answer is that it’s too soon to tell but there are a few trends that are heading in the right direction. [Courier Post]

Jordan Hall over at NBCSP notes several reasons for Philly's success, but one of the most obvious and undeniable is the team's fast start to games. It bucks a recent trend fans no doubt were tortured by over the last few years as the Flyers played from behind seemingly every single game. Playing from ahead is certainly a better recipe for success:

The Flyers are starting to jump on teams in the first 20 minutes, which is refreshing considering all the sluggish starts to games that plagued the team in recent years past.

Last season, the Flyers were forced to constantly play from behind. They allowed the NHL's second-most first-period goals (94) and finished with a minus-31 goal differential during the opening stanza.

Over their last four games, the Flyers have outscored the opposition 6-0 in the first period. Setting the tone has helped the Flyers dictate pace and play Vigneault's style. [NBC Sports]

In a league dominated by high draft picks, the Flyers are getting more than just complimentary contributions from one of their recent fifth-round picks, Oskar Lindblom. The young winger has a real chance to solidify himself as a true scoring threat on the Flyers' best performing line this season. Here's a bit more on the Swede from Sam Carchidi over at the Inquirer:

In 17 games this season, Lindblom has eight goals, which is tied for the team lead with 22-year-old linemate Travis Konecny, and 14 points. He didn’t score his eighth goal last season until Game 54 on Feb. 9.

The last time two players 23 or younger led the Flyers in goals through 10 or more games: Mike Richards and Jeff Carter, with six goals each through 10 games in 2007-08, according to the NHL.

The line of Lindblom, Sean Couturier, and Konecny has been the Flyers’ best unit, keying a 10-5-2 start going into Wednesday’s home game against powerful Washington....

...“It’s nice to show even if you get drafted in the late rounds, you can be on this level,” Lindblom said. “… I felt like I was probably going to have a little more time to show I can be an NHL player, so I took that time and worked hard.” [Inquirer.com]

We'll conclude with some optimism from Broad Street Hockey's Drew Meyer, who like the above Flyers' writers sees a different energy and level of play than the mediocre teams of the recent past:

It may be an old adage, but the Flyers aren’t just working hard, they’re working smart. I believe it was our own Bill Matz who said that the Flyers are finally playing a full 60-minutes of hockey and are keeping up the compete level. This could not be more true, yet it goes beyond compete level. The Flyers have been able to nearly perfect doing the “little things” right, which in turn, has led to more noticeable “big things”, like say...goals! It is a welcome sight to see, and has me incredibly excited for the future of this hockey club. [Broad Street Hockey]