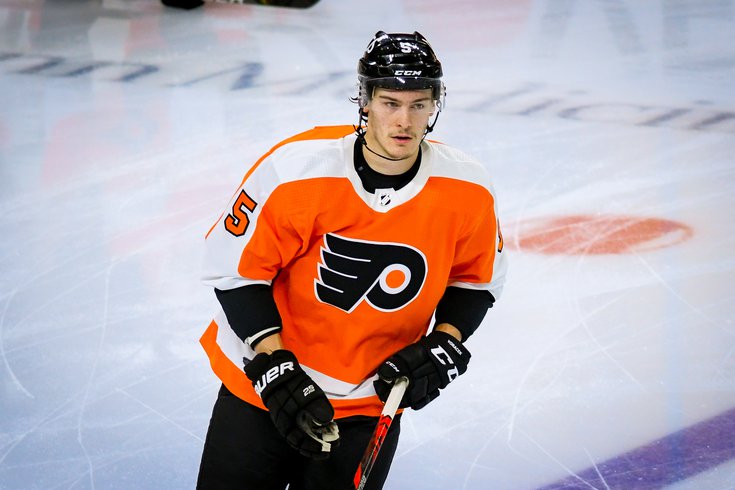 The Flyers are just four games into their 2021 campaign, but their well-documented roster depth is already beginning to get tested.

Last week, the Flyers lost Sean Couturier to a chest injury that will keep him out at least two weeks. Then, in Tuesday night's 3-0 win over the Sabres, the Flyers lost a pair of young skaters to separate injuries, defenseman Philippe Myers (ribs) and center Morgan Frost (shoulder), who coincidentally was the player they inserted into the lineup to replace Couturier.

According to the team, Myers suffered a broken rib and is considered to be week to week, while Frost's injury appears to be the more serious of the two. The 21-year-old center was placed on injured reserve after suffering a dislocated left shoulder against Buffalo. And while he's technically able to come off that list on January 26, a week after the Flyers placed him on it (retroactive to Jan. 19), the Flyers have not placed a timetable on his return, as he could be out for a considerable period of time.

Morgan Frost suffered a dislocated left shoulder and is out indefinitely. He has been placed on IR. We will provide further details about his return to play timeline in the near future.

Philippe Myers suffered a fractured rib and is considered week-to-week.

Anytime the word "indefinitely" appears in an injury report, it's usually not good. Although it could just be that the team is awaiting more test results on Frost's dislocated shoulder.

Either way, it's unfortunate for the young forward, who played against Buffalo before getting hurt in the second of their two-game set. With Couturier out, he was looking to earn some time with strong play in a temporary role. Now, there's a very real chance that Couturier could return to the lineup before Frost, meaning he'd likely have to wait for another opportunity to present itself.

In the meantime, the Flyers will reportedly have Connor Bunnaman center the fourth line with Michael Raffl and Nic Aube-Kubel, a line that has actually had some success together in the past.

In 77 minutes at 5-on-5 together last season, the Raffl-Bunnaman-NAK line:

So this "new" fourth line has had success together.

Scott Laughton will also move up to a different line with Bunnaman set to take his place on the fourth line.

Bunnaman, 22, had a goal and an assist (and was a plus-7) in 21 games last season, and even appeared in four postseason bubble games for the Flyers, meaning Alain Vigneault and Co. have faith that the kid can hold his own.

On defense, Mark Friedman, 25, will fill in for Myers until he's ready to return — or at least until Shayne Gostisbehere is ready to return from the league's COVID list, which could come next week. Just like Bunnaman, Friedman has been a guy who has steadily improved for the Flyers, and one who gained some NHL experience last season (albeit just six games). Now, he'll get a chance to show a little more.

The Flyers return to the ice against the Bruins on Thursday night for the first game of their two-game road series in Boston. Game 2 will come on Saturday night.