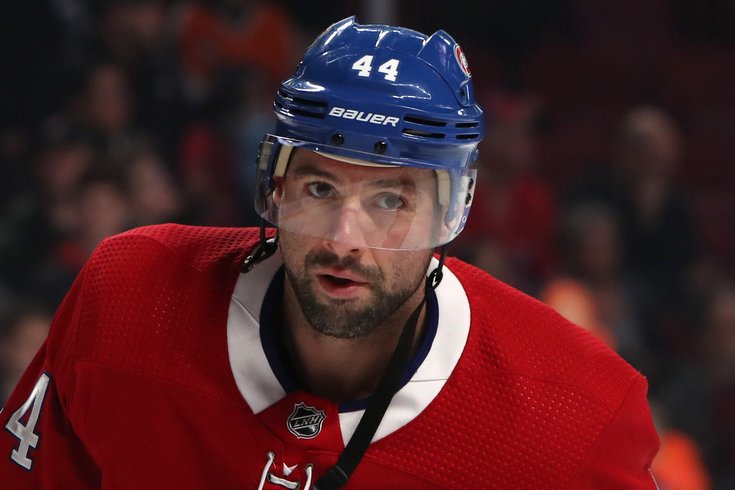 Nate Thompson will join Derek Grant as new forwards on the Flyers before the team's final 20 games.

Did they do enough?

Before we take a look at how Monday's trades helped to shape the battle for home ice advantage for Philadelphia, first a brief look at Grant and Thompson — who took the roster spots of Joel Farabee and Connor Bunnaman.

First Grant, who is in his seventh NHL season and has 20 points in 49 games in Anaheim so far. From Broad Street Hockey:

Grant has 14 goals (three shorthanded) and six assists for 20 points in 49 games this season.

The 29-year-old center is also solid in the faceoff dot, winning 51.4% of his draws this season and 52.5% in his career. Grant has primarily been used in a defensive for the Ducks with just 21% of his shifts starting in the offensive zone. He is a great penalty killer.

Not only does he have those three shorthanded goals, his shot attempts against per 60 minutes of 77.76 is the sixth best in the league among forwards with 100+ penalty killing minutes. The Flyers already have the second- and third-best in that category in Sean Couturier (24.25 CA/60) and Kevin Hayes (74.47 CA/60). Grant will assumably slot in on the fourth line for the Flyers.

He and Thompson will likely compete with the other players in the bottom six, giving the Flyers two more options to rotate into the lineup. [Broadstreethockey.com]

Thompson, as it says above, will be a bottom line center. He is 35 and brings with him an impressive 62 games of playoff hockey experience.

He’s got a good amount of playoff experience. He’s been playing a bottom six role for practically his entire career. Oh, and there’s this: He’s winning faceoffs at a 55% clip this season and has made 61 percent of his zone starts in the defensive zone.

He’s reliable to win those important draws in their own end and allows coach Alain Vigneault to feel more comfortable playing that fourth line in all situations having a veteran in the middle with Michael Raffl and likely Tyler Pitlick now that Grant has also been added.

Thompson also has a reputation as being a hard-worker off the ice with a leadership mentality and something that can rub off on younger players. Thompson had four goals and 10 assists for 14 points in 63 games for the Canadiens, averaging 12:48 of ice time. [Crossingbroad.com]

The Flyers chose not to take a bigger swing, and after the deadline Flyers GM Chuck Fletcher addressed that with media members.

“I don’t believe this was the best collection of rental talent out there," he said, via Flyers.com. "I talked to most teams in the league and looked at everything… Usually it’s the moves you least expect that have the biggest impact. I like our team. We have good players playing important roles.”

Head coach Alain Vigneault believes the veterans will add to a successful locker room dynamic that has helped the Flyers exceed expectations through 62 games.

"I think we've added to the chemistry, not taken away," Vigneault said Monday.

The biggest takeaway one can have tonight is not what the Flyers did, or what they did not do. It's what their rivals did.

Here's a look at the current standings in the Metropolitan Division:

The top three teams will make the playoffs, with the first two guaranteed at least one round of games at home. Every single team competing for a spot except for Columbus made a trade before the deadline, with Philadelphia arguably making the least impactful acquisition. Which means while it is hard to argue that they got worse on Monday, their division may have gotten a little bit better than they did.

Here's a look at the moves made by their Metropolitan foes:

• The Penguins acquired Patrick Marleau from the Sharks. He's a 23-year NHL veteran who has 10 goals this season.

• The Islanders acquired Jean-Gabriel Pageau from the Senators. He's the biggest get for the division, on track to set a career high in points at age 27.

• The Hurricanes acquired Vincent Trocheck from the Panthers. He has 36 points this year and had 75 a few years ago. He's just 26.

The Flyers have 20 games remaining and will be back on the ice Tuesday against San Jose.