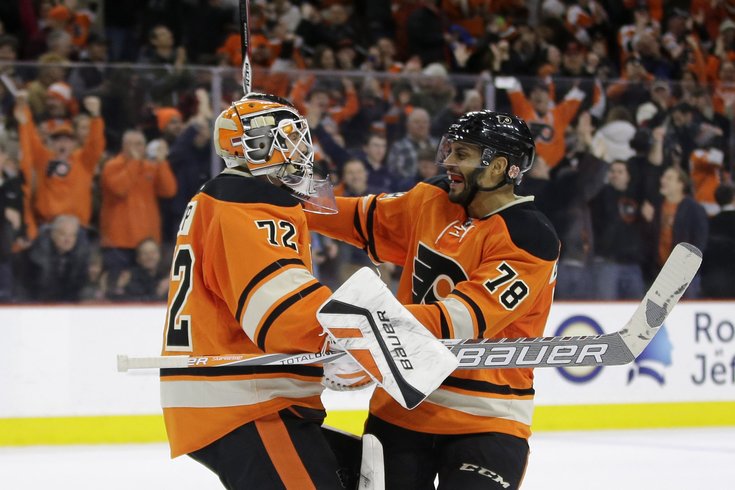 Just two days after leaving a crucial point on the ice against the worst team in hockey, the Flyers bounced back Saturday by stealing one from the NHL's best team, the Predators, at the Wells Fargo Center.

With Rob Zepp in one net -- starter Steve Mason is still injured and Emery got the day off -- and Vezina favorite Pekka Rinne in the other, the prospect of a shootout didn't look promising for the Flyers as the clock ticked down in regulation.

Not to get ahead of myself, but... Anyone else super excited to see a potential Zepp vs. Rinne shootout?

However, Zepp was stellar in the extra frame, stopping both Nashville shots, while Jake Voracek and Wayne Simmonds both beat Rinne down the other end of the ice to lift the Flyers to a 3-2 win over Peter Laviolette's Predators.

Simmonds got the scoring started for the Flyers in the first, but Colin Wilson beat Zepp with just over a minute remaining in the period. The goal, which came off a bad turnover by Michael Del Zotto, was scored on just the second shot of the game by the Predators.

The Flyers would climb back on top midway through the second as Ryan White scored for the second time in as many games, but the Predators were able to again level the score 23 seconds into the third. It was probably one that Zepp should have stopped.

I wonder what the reaction would be if Ray Emery allowed that goal.

Otherwise, the 33-year-old rookie goalie was solid in net -- especially in the shootout, which was his first in the NHL -- as he stopped 20 of the Predators 22 shots.

Most of the credit for the win goes to the defense, however, as they were able to hold the Predators, who lead the league with 85 points, to just seven total shots in the first two periods.

With the win, the Flyers climbed to within four points of the Bruins for the Eastern Conference wild card spot.

Here are some other things that stood out in the win:

Playing to their competition?

Following Thursday's loss to last-place Buffalo, captain Claude Giroux was asked about his team playing down (or up) to the level of the competition they're facing. He couldn't offer any reasons as to why that seems to be the case.

Q. Is there a reason why your team struggles against teams like that, say if it were Pittsburgh or the Rangers, would it be a different game?

Whether or not that's actually the case, it's hard to see their last two results -- and, more importantly, the way the Flyers played en route to those results -- and not think Craig Berube's team has a problem getting up for some opponents. If anything, a 1 p.m. start would typically be the kind of game in which a team could come out flat.

Not only did they come out fast, the Flyers dominated the Predators through the first two periods, outshooting them 22-7. Compare that to Thursday night, when the Flyers looked like one of the worst teams in hockey.

Let me see if I can get this straight:

Flyers vs. best team in league = Flyers look like a contender

Flyers vs. worst team in league = Flyers look like a disaster

I think it should be the other way around, but that's just me. The players seem to think it has less to do with that, and more to do with the fact that no team in the league is pushover; even the worst teams have the ability to test you on any night.

However, Wayne Simmonds, who was moved to the top line in place of a slumping Jake Voracek, said after the game that it was clear his team came out more fired up than usual.

"Unfortunately, we don’t play like that every night," the winger said. "We’ve got to figure out a way to play like that against teams that are below or the same as us. I think we focus in on what we need to do. We keep it more simple. We don’t try to do anything extra and it worked out."

Berube liked Simmonds' assessment, agreeing that when his team simplifies its game, like the Flyers do against tougher opponents, it goes a long way towards helping them win.

"That’s a good word: simplified," Berube said in reference to Simmonds' answer. "Maybe knowing that we’re playing a top team in the league, you have got to play simple hockey, and we did for most of the game. That’s the key to any game. If you play simple, support each other out there, and do what you’re supposed to do, you’ll have success.”

Even more important, according to center Ryan White, is not worrying about things that are out of your control.

"It’s not about who’s on the other side," center Ryan White said after the game. "It’s about what we’re doing in here and as long as we’re focused on our game here and we’re playing the right way I think we’re one of the tougher teams to beat in the league. There are some NHL teams that are good every night and you just have to worry about yourself.”

With only 23 games remaining, the Flyers will need to play every game the way they played against the Predators if they want to have a shot at making the postseason.

"We need every point we could possibly get and it doesn't matter how we get them," Simmonds added. "We just have to put them in the bank."

The Bruins still have a game in hand over the Flyers, but with today's win, they are now just four points behind Boston for the first time in a long time.

“We’ve come a long way, got a long way to go," Berube told reporters after the game. "Guys have been resilient, working hard, doing a lot of the little things that are needed to do it. We’ve got some really good goaltending that’s helped us win games with Mason out.”

And while there's still work to be done for a Flyers team that looked all but out of it multiple times over the last month and a half, getting such a crucial win to climb within striking distance for the last wild card spot has to be a good feeling.

“Obviously it feels really good, but we just have to keep our heads down and keep pushing forward," Simmonds said after the win. "By no means is this the last of our push. Got to keep going, and tomorrow is going to be another huge game. Washington has been playing well and we have to get those points.”

The Flyers will be in action Sunday against the Capitals while the Bruins will face the Blackhawks.

Who would have thought coming into this game that Rob Zepp (4-1 this season) would outplay a potential MVP candidate in Pekka Rinne?

Sure, Zepp let in a softy that tied the game early in the third period, but he made the saves that count, including this one to end the shootout:

Needless to say, he was fired up to get his first NHL shootout win.

“Yeah, I might have over done it a bit, but I just got caught up in the moment," Zepp told reporters after the win. "You know you make that save and the games over so it’s always fun to make a little glove save like that and I was just pretty excited. The guys battled so hard all night and they knew how much the two points meant to the team and I was just really happy to get those.”

Both Vinny Lecavilier and Luke Schenn were healthy scratches for the Flyers. Andrew Macdonald, who sat the last four games, and Zac Rinaldo, who missed eight games due to a suspension, returned to the lineup in their place.

Berube also shuffled the top two lines, moving Voracek down to the second line and elevating Wayne Simmonds to the top.

It seemed to pay early dividends as Simmonds scored the game's first goal.

Former Flyers coach Peter Laviolette returned to the Wells Fargo Center Saturday, but was unable to leave with a win.

After the game, he was asked if it was strange to be back in the building.

"No, not really," he said, but went on to say that the warm reception he got from the fans after he was announced was not surprising.