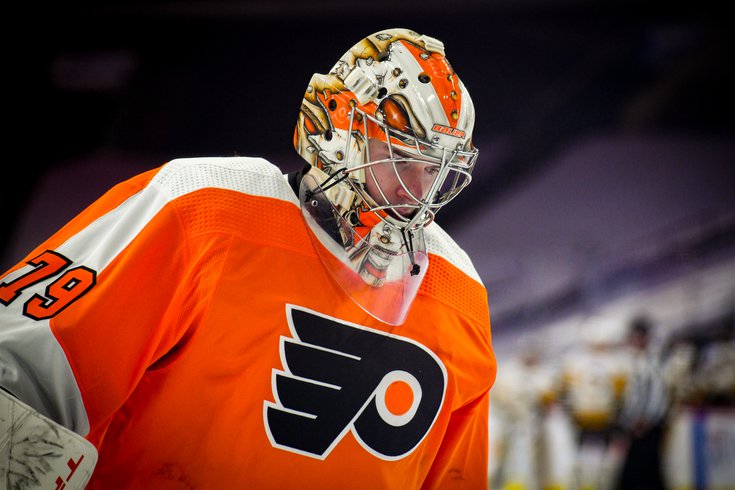 However, interestingly, the Orange and Black have not missed the playoffs in back-to-back seasons since 1993-94. Over the last nine seasons, they have been in the postseason tournament in even years, and have stayed home in odd years.

Well, for those counting, the next playoffs will be in an even year, which means the Flyers will most certainly be better in the 2021-22 season — right?

Training camp began this week in South Jersey, and it's no mystery what the top storylines and concerns are for the team, which got a facelift this offseason moving on from several players, including longtime winger Jake Voracek and former second-round pick Nolan Patrick.

Will the reinforcements brought in by GM Chuck Fletcher be enough to realign the Flyers as contenders in 2021-22?

Here are the four most intriguing storylines as camp continues.

Can Carter Hart bounce back?

This one is the most important storylines for the Flyers and it really isn't close. After a breakout season that made Hart, now 22, look like a franchise goalie back in 2019-20, his follow-up campaign made him look like, well every other promising net minder the Flyers have brought in over the years.

By every single metric, he was awful last season — due in part to a bad defense in front of him but there is clear regression. In the offseason, Hart has been bulking up and doing everything he can to bounce back.

"I like his face right now and his demeanor," head coach Alain Vigneault said. "He’s smiling. He does look bigger with his shirt on and real fit. The fact that he was able to have a normal summer of training with other players and his goaltending coach. I think it was a real good summer for him and for the rest of our group. I believe that is going to help moving forward."

Hart himself was asked by media members when fans should expect to see a difference, and his answer beamed with confidence.

"Right away," he said. "Just needed a break after last season. Took some time off from the ice and had to recharge the batteries a little bit. Got into tennis this summer so that was fun. Golf is usually what I do over the summer. It was good to recharge and relax for a little bit. Had a good summer of training also."

How will the Flyers handle early injuries (to key guys)?

It didn't take long for the injury bug to bite the Flyers — and hard. Kevin Hayes, one of the key offensive stars for the Flyers last year underwent abdominal surgery that will keep him out at least a month, and potentially for two.

Sam Morin also will miss six-to-eight weeks with a knee injury. The Flyers are short-handed before the puck even dropped in a regular season game.

It's too early to tell how their absences will effect the roster — though Morgan Frost's case to make the opening day roster certainly has gotten a boost. But the Flyers will still rely on Hayes to be a leader even as he remains off the ice.

"As you develop as a team and do the team bonding stuff, Kevin is a huge part of that for us," James Van Reimsdyk said. "He is the life of the locker room in that sense. People tend to gravitate towards him and love being around him. We are happy to have him around and it’s a tough break for him as far as the injury stuff. He will be ready to go when he is back in there."

Will roster changes make a difference?

After sticking with what seemed like the same core for years, the Flyers shook things up in a big way. Ryan Ellis, Derrick Brassard, Rasmus Ristolainen and Keith Yandle are the biggest new names who'll be playing every day in Philly. The theme in the acquisitions the Flyers made is that they brought in guys with playoff experience and who can be veteran leaders with young talent seeping through.

"I feel that all of the guys that Chuck was able to put his hands on," Vigneault said, when asked which new faces jump out the most, "whether it would be through trades or signing as free agents. I know some of them. I had known about some of the other guys from trades. A lot of the players are good people. They want to be here, and they want to be successful. I have seen a lot of that behavior and that attitude off the ice. I’ve seen it on the ice today for the first time with them. It was one step, but it was a very good step."

Will youngsters break through?

There are some rosters spots up for grabs in camp and some really talented recent draft picks vying to make the leap to the NHL. The top name that comes to mind is Frost, who got some valuable ice time to start ice alongside the regular starters. Is that a preview of his role to come?

"With Hayesy out, Morgan’s a young player that hasn’t played a lot of hockey in the last couple of years but high expectations, high-end prospect," Vigneault said. "With Hayes going down, it gives him a quick opportunity to show what he can do and what’s supposed to be his skill set. He’s supposed to be a top six forward, in theory, so I’ll give him that opportunity. I don’t know how long that is going to last. We’re going through our first five days and then two exhibition games. We’ll see how everyone reacts and see if there’s chemistry with guys on the ice, a lot of new faces. Probably going to take a little bit of time."

Some other names to watch include defenseman Cam York, forward Tanner Laczynski, and currently injured prospects Zayde Wisdome and Wade Allison. Youngsters Egor Zamula, Tyson Forester and German Rubtsov are also bodies to keep an eye on (they would need very impressive camps and a little luck).