Flyers sign goalie Martin Jones to back up Carter Hart 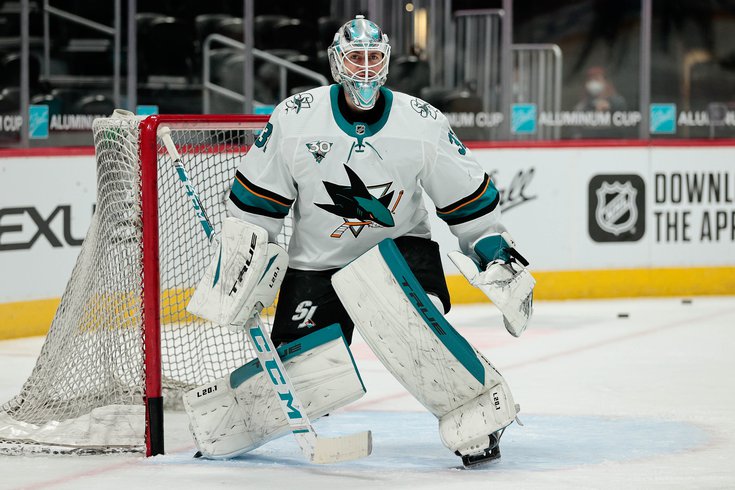 UPDATE [2:47 p.m.] — The Flyers have made the signing of Martin Jones (as well as the signing of Nate Thompson) official, and have already held an introductory Zoom call with reporters for their new backup goalie, who said his decision to sign in Philly was aided by his familiarity with the team's goalie coach, Kim Dillabaugh.

Jones on Flyers Goalie Coach Kim Dillabaugh: “He knows my game very well. We know how to work together. It was a factor [in deciding to sign in Philadelphia] and hopefully we can pick up where we left off and get my game back trending to where it was a couple years ago.”

He also said he's looking to turn things around in 2021 after a few down years.

And that part of the reason he came here, like Keith Yandle, was because he felt he had a chance to win.

Jones on signing in Philly: “I’ve loved the Flyers move so far this offseason. I think we have a really good opportunity to win a lot of hockey games.”

Whether or not that turns out to be the case — especially after the Flyers missed the playoffs last season —remains to be seen.

The Flyers came into free agency with one need standing out above the rest: a backup goaltender to pair with a young Carter Hart. And although a few goalies had gone off the board in the hours leading up to free agency opening at noon on Wednesday, general manager Chuck Fletcher didn't waste any time getting his man.

According to multiple reports — and first reported by SportsNet's Elliotte Friedman and TSN's Darren Dreger — the Flyers have signed former Sharks goalie Martin Jones to a one-year deal worth $2 million.

With former backup Brian Elliott signing a deal with the Lightning earlier in the day, it became apparent that the Flyers were going to have a new backup for the 2021-22 season, and while there were reports the Flyers were looking at Braden Holtby and others, they ultimately landed on Martin, who had recently been bought out by San Jose.

On the surface, Jones' numbers — not to mention the fact that the Sharks just dumped him — aren't exactly going to inspire a lot of confidence. Jones went 15-13-4 last year with a 3.28 goals-against average and .896 save percentage last season with the Sharks. The 31-year-old goalie spent the last six seasons with San Jose and had seen his numbers decline steadily over the last few years.

However, there's a caveat.

While his goals against average ballooned to 3.28 last season, his .896 save percentage has been holding steady the past three seasons, a clear sign that the it's more likely terrible defense around him that's led to that fall in production. After making the postseason in each of his first four seasons there, including a trip to the Stanley Cup Final and another conference finals berth, the Sharks failed to make the playoffs each of the last two seasons and their defense has been part of the reason why.

The Sharks would not have made it to the 2016 Stanley Cup Final without Jones. That series between the Pittsburgh Penguins and the Sharks was a true battle of goaltending, and had the Sharks won, Jones may have had a Conn Smythe title under his belt.

Whether it was a lingering injury or changes to his play style or the Sharks insisting on playing him 60+ games for four seasons straight, Martin Jones — who was streaky to begin with, but with longer and higher highs — fell off a cliff. I don’t know that it could’ve been anticipated, though the six-year deal he signed in 2017 was perhaps always destined to be too long of a term for a goaltender that had only just become a starter.  [fearthefin.com]

Could a new environment reinvigorate the veteran netminder? Perhaps. But at the very least he should be a younger backup option for Hart, and should have the ability to play in more games than Elliott did during his three seasons in Philly.

Jones is def physically capable of taking on a larger share of the load than Elliott was. 62, 41, and 34 games played the past three seasons.

Now, do you want him taking on a bigger share of the load? Welp. My guess is Dillabaugh thinks he can fix him. Was there with him in LA.

The last few seasons haven't been great for Jones, but the Flyers apparently believe they can get him back on track. Of course, if they can't, that will put added pressure on Hart to have his own bounce-back season after a rough 2021 season that saw him regress.

So, what's left for the Flyers? Perhaps another winger? Stay tuned to our live updates post right here as free agency rolls on...