Live updates and rumors: Who will Flyers target as NHL free agency opens?

After landing Keith Yandle on Tuesday, the Flyers' added a backup goalie and a veteran forward in the first 90 minutes of free agency. 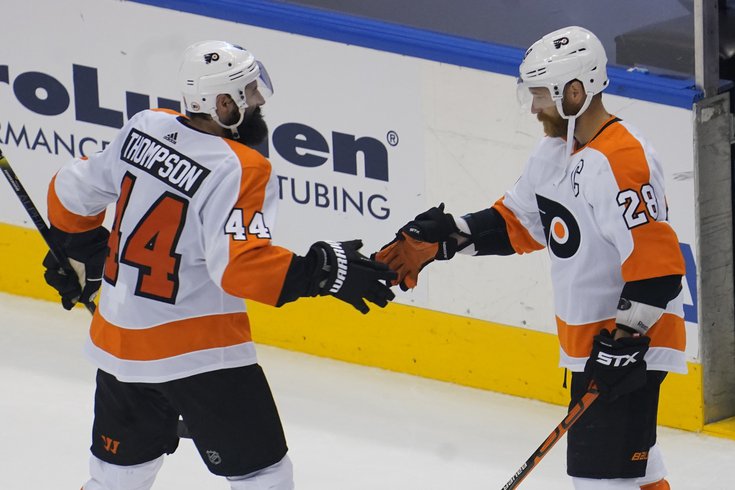 Claude Giroux will be welcoming Nate Thompson back into the fold for this season.

UPDATE [2:49 p.m.] — The Flyers have made their deals with both backup goalie Martin Jones and veteran forward Nate Thompson official.

You can read more about Jones right here and more on Thompson below.

UPDATE [2:11 p.m.] — The Flyers have reportedly already added a depth forward Nate Thompson. Now, it appears, they'll add another forward even deeper down the org chart in 28-year-old Adam Clendening, who will be joining the club on a two-way deal, according to SportsNet's Elliotte Friedman.

Clendening was most recently with the Blue Jackets, but hasn't played in an NHL game since the 2018-19 season and has just 24 points in 90 games dating back to 2014.

It appears as though Clendening will be primarily with the Phantoms but is an option for the Flyers to call upon should they need injury replacements.

Hasn't played in the NHL since 2019, but will offer a veteran presence for the Phantoms.

We'll keep you posted if any more moves are made.

UPDATE [1:24 p.m.] — In addition to adding a backup goalie, it appears the Flyers are adding some depth at forward as well. The team has reportedly signed free agent center Nate Thompson, who previously appeared in seven games with the team during the pandemic-shortened 2019-20 season.

The 36-year-old veteran spent last season with Winnipeg, appearing in 44 games and recording 5 points (2 goals, 3 assists) while averaging just under 10 minutes per game. He has played on nine different teams in his 14-year NHL career and is likely a depth signing for the team at this point in his career.

“Once I became a free agent, the first team that I looked at was the Philadelphia Flyers,” Yandle said in a statement released by the team. “Obviously, having AV before and playing with Kevin Hayes helped my decision. What Chuck (Fletcher) has done this off season bringing in guys and putting the team in a place where it gives us the opportunity to succeed is a big thing for me. I know for me, all I want to do is win and coming to the Flyers gives me the best chance for that.”

You can read more about the signing and what the 34-year-old ironman brings to the team, here.

UPDATE [12:09 p.m.] — Chuck Fletcher apparently wasn't wasting any time, landing his backup goaltender less than 10 minutes after free agency opened. According to reports, the Flyers are signing former Sharks goalie Martin Jones after he was bout out by San Jose.

It's reportedly a one-year deal worth $2 million.

UPDATE [12:00 p.m.] — NHL free agency is officially underway and the deals are flying. But so far, the Flyers have remained quiet (for a change). That's not great news considering several backup goalie options have already come off the board, like Jonathan Bernier, Jaroslav Halak and, more recently, their own former backup in Brian Elliott.

With the NHL Draft in the rearview, it's time for the next step on the NHL's annual calendar: free agency.

The Flyers have already been busy this offseason, adding pieces to bolster their roster while moving others in order to free up the cap space needed to sign those new additions. Gone are Jake Voracek, Shayne Gostisbehere, Nolan Patrick and others. In are Ryan Ellis, Cam Atkinson, Rasmus Ristolainen and Keith Yandle (well, at least the last one is expected to sign soon).

And — depending on when you're reading this — free agency hasn't even officially kicked off yet. That happens at noon on Wednesday.

The Flyers still have a few holes to fill, albeit without a ton of cap space with which to maneuver.  They currently have just under $11 million once they bring Yandle into the fold, according to ESPN. They also have qualifying offers out to Travis Sanheim and Carter Hart.

So unless they make another trade for cap space, which is unlikely but can't be entirely ruled out, Chuck Fletcher's hands are more or less tied when it comes to making and big-name additions.

The one move they still need to make, however, is figuring out the backup goalie situation behind Hart. Brian Elliott will hit the open market, and there are reports that the Flyers could target veteran Braden Holtby, who has ties to Hart and was recently bought out of his his contract by the Canucks on Tuesday.

Vancouver buying out Holtby increases the odds that #Flyers will sign him as their backup G. He is close friends with Carter Hart.

Holtby is coming off by far the worst year of his career, so perhaps Fletcher believes he can get the 31-year-old former Stanley Cup winner for cheap. If he can, the Flyers could pounce. If not, there are plenty of other options for the Flyers to serve as their No. 2 goalie.

In a recent column, the Inquirer's Sam Carchidi took a look at 10 names. Here are three of those players, all of whom are unrestricted free agents and would make sense for the Flyers.

Jonathan Bernier, 32, Carolina, UFA: Signing him makes lots of sense. He won the 2012 Stanley Cup while a backup for the Kings when Dean Lombardi, now a Flyers senior adviser, was L.A.’s general manager. Bernier is still effective — he and had a .914 save percentage last season with the lowly Red Wings — and would be a great mentor for Hart. While with L.A., he also worked with Kim Dillabaugh, now the Flyers’ goalie coach. [...]

James Reimer, 33, Carolina, UFA: Reimer had his second straight season with a 2.66 GAA for Carolina, while his save percentage dipped from .914 to .906. He is a steady but not dominating goaltender.

Linus Ullmark, 27, Buffalo, UFA: The Sabres protected him in the expansion draft, but will they be able to re-sign him? If not, he would fit in nicely with the Flyers because he is young and has the ability to play lots of games. In an injury-plagued season, he had a 2.63 GAA, a .917 save percentage, and a commendable 9-6-3 record with the woeful Sabres, whose other goalies went a combined 6-28-4. He may be too expensive for the Flyers.  [inquirer.com]

Will one of those guys be backing up Hart next season? Will it be Elliott again? Will it be Holtby? Or will it be someone we haven't even mentioned yet? Stay tuned to our live tracker as NHL free agency gets going this afternoon, and maybe we'll get our answer.