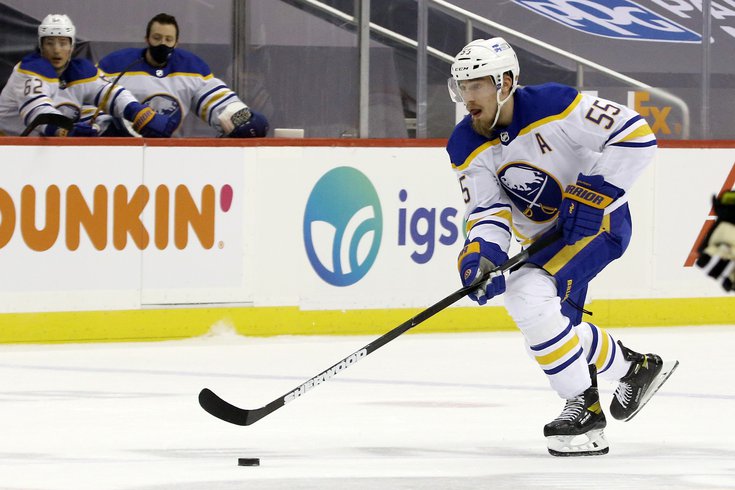 The Flyers have acquired defenseman Rasmus Ristolainen from the Sabres.

The Flyers quest for a right-handed defenseman has come to an end, as the team acquired Rasmus Ristolainen from the Sabres. But it was costly.

In exchange for the 26-year-old former first-round pick, the Flyers had to part ways with not only Robert Hagg, but a pair of draft picks as well, including their first-round pick (13th overall*) in tonight's NHL Entry Draft.

*Technically the Flyers have the 14th pick, but since the Coyotes have to forfeit the 11th pick, the Flyers' pick will be the 13th selection made on Friday night.

We have acquired defenseman Rasmus Ristolainen from the Buffalo Sabres in exchange for our first round pick (13th overall) in the 2021 NHL Draft, a second round pick in the 2023 NHL Draft and defenseman Robert Hagg. Details: https://t.co/UOBqWNQCm6 pic.twitter.com/vCrkLgY0Mt

Despite his age, Ristolainen has quite a bit of experience, appearing in 542 games over the last eight seasons with Buffalo after being taken eighth overall in 2013. Last year, he played in 49 games, posting 18 total points (4 goals, 18 assists).

The deal comes just a few days after the team also acquired veteran blue liner Ryan Ellis, who figures to be on the top pair along with Ivan Provorov, likely meaning Ristolainen will be in the second pairing, a step back from his role in Buffalo but one that could benefit him, as he struggled at times throughout his Sabres career (more on that in a bit). The Flyers also made a move involving a defenseman on Thursday, trading Shayne Gostisbehere (and another pair of picks) for salary cap space, space they essentially just used to add Ristolainen.

After that deal, Flyers general manager Chuck Fletcher discussed the importance of adding a right-handed defenseman to his grouping, and it seems like he's found his guy in the big, physical Ristolainen.

"We are extremely happy to add Rasmus to our blueline," Fletcher said in a press release on Friday. "He is a 26-year-old, right shot defenseman who will immediately add grit to our team. His size, mobility and physicality will make him an important piece to our group going forward."

While the Flyers seem happy to be adding the Finnish defenseman, the reaction on Twitter was not quite as positive.

Half of the Flyers fan base will love the Ristolainen move and half will hate it. The team needed nastiness in a huge way as they were to easy to play against physically. Risto brings nastiness.

And that was before anyone realized that it cost the Flyers a first-round pick. At the time, reports were suggesting it was for a future second and a third, which turned to be less than it actually was. When you add up the balance of everything, it's a bit daunting to look at...

So if you add up the assets of the last two days, it's:
*Shayne Gostisbehere & Robert Hägg
*2021 1st round pick (13th overall)
*2022 2nd round pick
*2023 2nd round pick
*2022 7th round pick
for
Rasmus Ristolainen#Flyers effectively sure up their 2nd pair with Travis Sanheim. pic.twitter.com/DEnVJl9Fmw

But the biggest thing the Flyers gave up here is that 13th overall pick, especially when you consider that Ristolainen is entering a contract year. Essentially, he's a rental player at this point on a team that is not in a position to be taking on those kinds of deals.

Perhaps they can get a long-term extension worked out, but by overpaying for Ristolainen now, they've essentially given him a huge amount off leverage. He knows how much the Flyers paid to get him, and how bad it would look if they gave all that up for a year of his services, so he can really jack up that price if he wants, knowing they'll likely be willing to overspend if it means saving face.

What won't be helping Ristolainen in negotiations, however, are some of his on-ice struggles, especially as a top-pair defender.

Ristolainen's results in Buffalo, by every objective measure, have been terrible in a first-pair, heavy minutes role.

Is it possible that given a lesser role and the right partner he could be fine? Sure. It's definitely not a bet I would make, though.

Rasmus Ristolainen, acquired by PHI, is a big defenceman who notoriously has put up absolutely horrible results at both ends of the ice consistently throughout his entire career. #AnytimeAnywhere pic.twitter.com/G4TmfNJftU

The Sabres have been outscored 427 to 301 at 5-on-5 with Rasmus Ristolainen on the ice in his career.

Could a move to a lesser role help him statistically? Perhaps. But the Flyers will also need him to be able to step up into that top spot if there's an injury that causes an extended absence of any kind.

Does Fletcher have any moves left in the tank? Well, he's been one of the busiest GMs in the NHL over the past week, so it probably shouldn't be ruled out at this point...