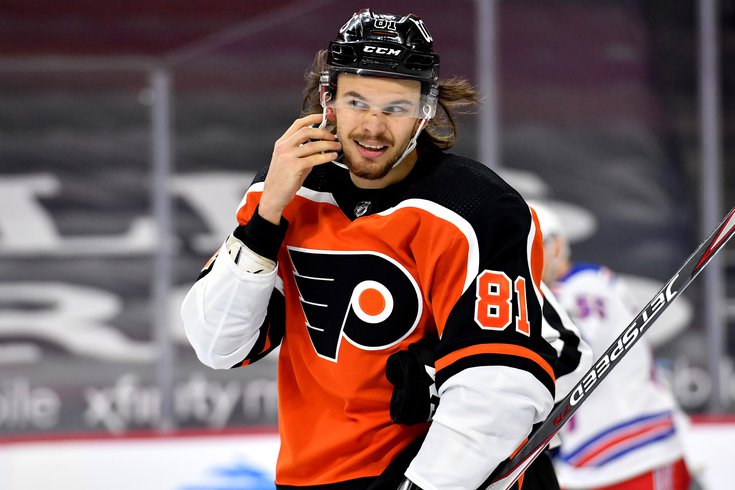 It was gearing up for a big farewell this week, with the Flyers dangling well-known veterans like Jake Voracek, James van Riemsdyk, Shayne Gostisbehere and Justin Braun in front of the NHL's newest team, the Seattle Kraken, ahead of the expansion draft on Wednesday night.

The overwhelming belief was that Seattle was going to pluck JVR from the Flyers, a year after the one-time member of the Orange and Black was reunited with the team that drafted him, and get themselves a veteran presence with plenty of NHL experience. Some thought they may take Voracek or Braun or Gostisbehere, but either way it was looking like the Flyers, just a couple of days after trading for defenseman Ryan Ellis, would be using this opportunity to open up some salary cap space ahead of bigger offseason moves.

But it turns out the Kraken had plans of their own, opting to select Carsen Twarynski instead, according to Frank Seravalli.

There was a lot of intrigue about whether #SeaKraken would be tempted to take one of the high-priced players the #Flyers dangled.

Hearing the selection was a bit of a surprise: Carsen Twarynski.

Can honestly say I didn't see him plucked in many mock drafts. @DFOHockey

Not that @frank_seravalli needs me to confirm his work on this front, but yes, I can confirm that Carsen Twarynski is Seattle's pick from the Flyers.

On one hand, Chuck Fletcher will now be forced to find that cap relief elsewhere, especially if there's another big trade brewing. For example, some were speculating the Kraken would select Vladimir Tarasenko from the Blues in the expansion draft, with reports being that they would then re-route the forward to another team like the Flyers, who are on his list of potential trade destinations.

On the other hand, the Flyers won't be losing any of their big-name players, and will instead be sacrificing to the expansion draft gods Carsen Twarynski, who is only 23 years old but has appeared in just 22 games for the Flyers over two seasons after being selected 82nd overall in the 2016 NHL Entry Draft.

Speaking of the actual draft, that will take place in just two short days, with the first round kicking off on Friday night. The Flyers, who currently hold the 14th overall pick, should have a lot of options, and the consensus is that they'll be looking to add offense. It's worth wondering whether or not this expansion draft surprise throws any wrinkles into Chuck Fletcher's plan.

Meanwhile, the expansion draft kicks off Wednesday night at 8 p.m. on ESPN 2, although it appears that the majority of the picks will be known by then.