NHL mock draft roundup: Who will the Flyers take with the 14th pick?

And which player will they lose in the expansion draft on Wednesday night? 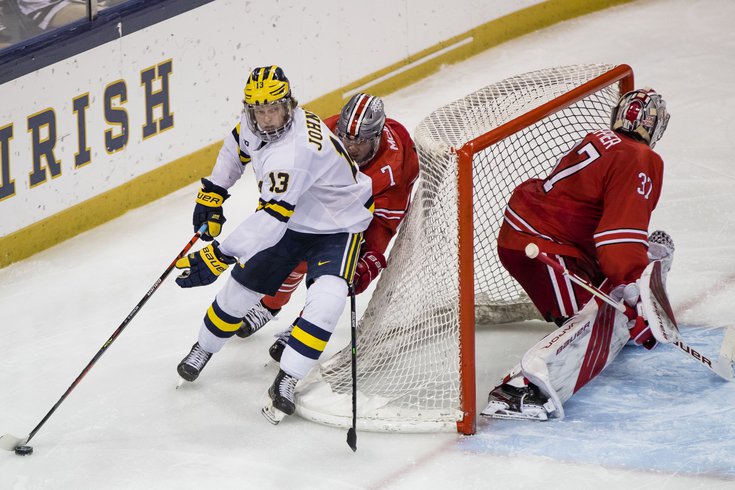 Michigan's Kent Johnson (13) could be an option for the Flyers in the first round of the NHL Draft.

Between the upcoming NBA Draft and the ensuing MLB trade deadline, which will take place on back-to-back days at the end of next week — not to mention the start of Eagles training camp a few days before that — it's easy for the NHL Draft to get lost in the shuffle, especially when the Flyers failed to make the playoffs and left a sour taste in the mouths of a lot of fans.

Before the Flyers can add any young players, they're likely to lose one veteran player via the expansion draft, as the NHL is set to welcome a new franchise, the incredibly-named Seattle Kraken. That draft will take place on Wednesday night, with the real draft taking place two days later, and the Flyers have left some pretty well-known players exposed, including Jake Voracek, James van Riemsdyk, Justin Braun and Shayne Gostisbehere.

According to a trio of hockey experts, one of those players will be skating in Seattle next season.

But before we get into that, let's take a look at the actual draft, and which player the Flyers might take with the 14th overall pick on Friday night. Interestingly enough, three of the six hockey writers we looked at had the Flyers taking the same player — and all of them had the Flyers adding offensive firepower to their prospect pipeline.

The Flyers could look to add center depth to their prospect pipeline and Svechkov (6-0, 187) was a standout at the U-18 Worlds, centering Russia's top line and scoring 10 points (four goals, six assists) in seven games. The 18-year-old also is regarded as one of the better defensive forwards available in the draft.  [nhl.com]

The takeaway: It might surprise you to know that I haven't watched or read much about the Russian hockey leagues, so my knowledge of Svechkov is limited in the sense that I've never heard of him before, which is typically the case for NHL Draft prospects. The fact that he's one of the better defensive forwards in the draft (according to Kimelman) and that he was also good enough offensively to center Russia's top line in the U-18 Worlds is giving me big Sean Couturier vibes. Is that asking a bit much? Of course, but it's draft time, so we should all be allowed to dream.

Anyway, since my analysis is basically meaningless, here are some highlights of Svechkov:

The USHL Rookie of the Year is a skilled offensive player with a great release on his shot, a high hockey IQ and excellent vision and playmaking ability. The 18-year-old scored five power-play goals and led Sioux Falls with an average of 1.48 points per game.  [nhl.com]

The takeaway: This is the first of three straight analysts who have the Flyers taking the 18-year-old center from the USHL, so we'll keep all our analysis here and skip the "takeaway" portion on the next two. Sillinger is the son of former NHL player Mike Sillinger, who actually spent parts of two seasons with the Flyers, appearing in 52 games for the Orange and Black. As you'll see in the ensuing write-ups, some think he should be going higher than this, as he can clearly put the puck in the net. His wrist shot especially has drawn a lot of praise from scouts, including Elite Prospects, who calls it "a sight to behold."

I guess the only thing to do then is to behold it...

As we go through the draft process, Sillinger is the name I keep hearing from scouts as the top 10 candidate who isn’t being mocked enough in the top 10, which in this scenario happens again. The Flyers would likely be very happy to get him at 14.  [theathletic.com]

With only one pick out of Europe in the previous two drafts, and a rich history of drafting players on the collegiate track (although not so much last year), the Flyers will likely be sorting through the same group of forwards that Chicago and Calgary were, only now with one less still available. So why pick Sillinger over Coronato, Lucius, or Stankoven? Regarding the latter, the Flyers haven’t shown the openness to taking smaller guys early, or using them as lineup centerpieces. Lucius’ draft year was delayed due to surgery, and while his numbers are great, the sample size was tiny (13 games) and his pace is a concern. Coronato put up tremendous numbers all season long, but he seems primed to make whoever drafts him wait, as he is heading to play for Harvard. That leaves Sillinger, whose father played for the Flyers over parts of two seasons before Cole was born. Cole lit up the USHL for a bottom feeding Sioux Falls team, and should continue doing the same next year as he returns to the WHL, to play for the Medicine Hat Tigers. He has an NHL style game, a strong frame, and a killer instinct for shooting the puck.  [nhl.nbcsports.com]

The Flyers swing for the fence here by taking the highly skilled Johnson, whose offensive upside is undeniable. Philadelphia has never been shy to select players who have some skating limitations too, with the confidence that their development team can make the necessary improvements. No doubt, this is a potential home run.  —Brock Otten  [sports.yahoo.com]

Jokes aside, it seems like the Flyers landing Johnson with the 14th pick would be a bit of a steal, and watching his highlights it's not hard to see what the writer above was referring to in terms of his offensive abilities and why Elite Prospects calls his game "effortless." Take a look for yourself...

If he didn’t have injury issues this season, it’s very likely that Lucius would be a top-10 pick. In the shortened season he had, he did show what he brings to the table with a plethora of skills and a knack for putting up points. The Flyers have a strong collection of U23 players right now, and Lucius could be the best finisher of the bunch. With how hard he works on and off the ice, he might not be that far from hitting the ice in Philadelphia.  [sportingnews.com]

The takeaway: Lucius is another offensively-gifted forward the Flyers are apparently interested in, with The Hockey Writers calling him "a natural finisher" with "a vast array of options in his shooting arsenal." They also said he gets his shot off quickly and has been developing habits that bode well for his ability to make it at the next level. Since Lucius was injured much of this season, let's take a look at his highlights from the 2019-20 campaign...

And now, back to the expansion draft, where three different writers all had the Kraken taking the same player from the Flyers...

Francis’ claim about the importance of cap space keeps popping up, but term matters more. That’s why I don’t think the JVR contract is too unattractive. It’s just two years of commitment for a guy who can score 25-plus goals as a scoring-line winger and power-play presence.   [si.com]

James van Riemsdyk played some of his best hockey under Dave Hakstol. He's the type of veteran that should be motivated by the new opportunity -- just as Adam Henrique will benefit from a change of scenery after stalling out on an uncompetitive Ducks team.  [espn.com]

Part of the challenge here is balancing who I think old-schoolers like Francis, Jason Botterill and Norm Maciver want to draft with who Seattle's brilliant analytics department led by Alexandra Mandrycky and Namita Nandakumar want to draft. I've heard they're on equal footing in this process. So my mock draft has a few talented veterans in James van Riemsdyk and Mark Giordano, and a few fancy-stats darlings like Jared McCann and Joonas Donskoi. This is a roster that can score on the wings and defend well; although much like with Vegas in Year 1, it's a bit of a donut in the middle.  [espn.com]

The takeaway: Goodbye again, JVR. The reunion was short.