From Eagles lineman to unpaid intern, Barrett Brooks paid his dues and earned it the hard way 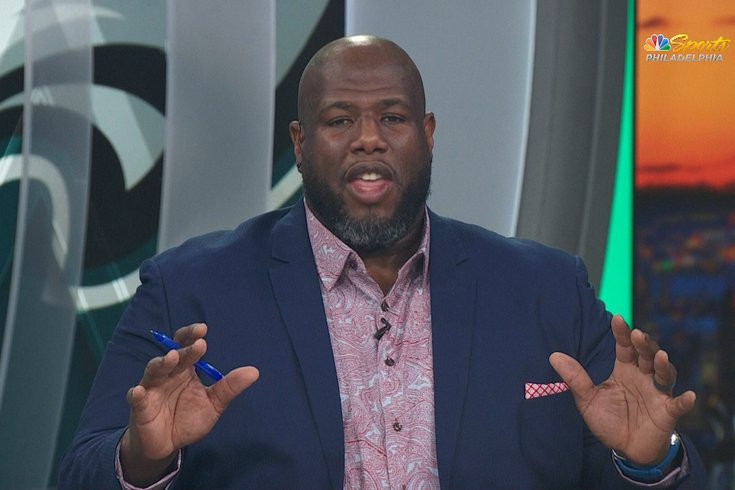 Barrett Brooks has become a household name for Eagles fans.

The driver’s side window was down with a long meaty left arm, the size of most human’s thighs, casually dangling out by the side.

Barrett Brooks sat there, mumbling to himself in the drive-thru of the Mt. Laurel, New Jersey, Chick-fil-A. Beads of sweat bubbled on his steaming forehead as his right hand clutched the steering wheel. It was a way to tease the building tension coursing within him. Brooks began cursing to himself—“I’m going to kick Sterling Sharpe’s ass when I get back to the office!”

This wasn’t exactly what the former Super Bowl champion guard envisioned his first foray into broadcasting would be.

Although, there he was in the summer of 2010, swiping sweat with his forearm while baring the brutal heat, sitting in the drive-thru of a Chick-fil-A—pissed at Sharpe for sending him out to fetch chicken.

Barrett Brooks was a rookie again—and being treated like one.

It’s been that way for 24 years, because invariably, after the final seconds tick away from every Eagles game, fans immediately tune into what Michael, Ray, Seth and Barrett have to say. It’s where nothing is scripted and the arguments are real.

When the understated Brooks speaks, people listen. He’s been calling Big 12 games for ESPN the last three years, after working four years in the production truck. The affable bear played 12 seasons in the NFL—his first four with the Eagles, after being drafted in the second round of the 1995 draft out of Kansas State.

He graduated Kansas State with a degree in sociology and has a graduate degree from Colorado Tech in health care administration.

Nothing, however, came easy.

The oldest of three, Brooks was born and raised in St. Louis, Missouri, his father was in the military for 17 years and his mother worked as a sous-chef at Aldi, Inc. His parents divorced when he was 7. Since he was tall for his age, Barrett was able to reach the stove. While his mom, Phyllis, balanced 16-hour work days doing various different jobs, he cooked and watched over his younger brothers.

Phyllis slept on the living room couch, and the boys took the one bedroom in the cramped Boaz Apartment complex in Kinloch, St. Louis.

The work ethic that shaped him came out of necessity, so getting chicken for Sharpe was not that big of a deal, except for the indignity of being a grown-ass man in his late-30s doing it.

“We were on food stamps, we were on everything, but I don’t think I ever had the sense we were poor until I got to high school,” Brooks said. “I’m from Kinloch, which had the fifth-highest crime rate in the nation. That was safe ground for me. Everyone knew everyone.

“I was bused to McCluer North High School, which is in a predominantly white upper-middle class area. When I walked through that front door, I got all kinds of looks. I could feel the looks. I was bigger than everyone, so no one said anything directly to me. Me and my brother would get two pairs of pants each, and a pack of t-shirts, so I wore the same stuff.

“I hung around the guys from the neighborhood. We were thick as thieves. My dream was to go to the NBA, not the NFL. I quit football my junior year and my mom told me to go back to the football coach to come back my senior year. I told myself that I would never quit anything again. That became my way of thinking—that I would do everything to the best of my ability—and never quit anything else in my life.”

As his high school years waned, Brooks became very agitated that everyone around him was getting letters from big-time schools and he wasn’t. Until he realized he wasn’t going to be St. Louis version of “The Round Mound of Rebound,” like Charles Barkley, football wasn’t a priority.

“Football saved my life,” Brooks said. “I needed football. Halfway through my senior year, I’m all-city and all of that stuff, but I still wasn’t getting any letters from big-time schools. I underachieved. I didn’t push myself to my fullest potential.”

About halfway through his senior year, the attention started to come. Brooks later discovered that McCluer North coach Jim Schottmueller had kept from him two huge boxes of college letters addressed to him.

“At the time, I hated coach Schottmueller for doing that,” Brooks said, laughing. “But coach was right. I became serious about things, and about changing my life. It’s why I faced every situation head on—even getting chicken for Sterling [laughs].”

Brooks went on to become a four-year starter at Kansas State, and played for the Eagles, Lions, Packers and Steelers in the NFL. He finished in 2006 as part of Pittsburgh's Super Bowl XL-winning team.

In the last four years of his NFL career, he and his wife, Sonji, started a nursing school based in South Jersey called Brooks Alternative (BA) School of Nursing and Allied Health Care for 11 years. The family closed the school as his nursing agency, Brooks Alternative Services, blossomed financially.

Although something was still missing … football.

Brooks, the father of five ranging in age from 30 to 19, was not hit by the broadcast bug until two years after he retired from football. He called former Eagle and NFL Films veteran Brian Baldinger for some advice. Baldy suggested Brooks try NFL Films in Mount Laurel.

In the summer of 2010, Brooks was hired as an unpaid intern by NFL Films.

He did work for NFL Playbook, doing the tedious chores no one else wanted to do. There’s whale dung—and lower than whale dung. That’s where Brooks swam in his first year of broadcasting.

"What I really admire about Barrett is that he’s paid his dues in this business. Nothing was handed to him." —Ray Didinger

“Sterling would buy all of the interns Chick-fil-A and send me out to get it,” says Brooks, laughing. “I did that all season. I got everything, not just Chick-fil-A. I had the NFL pedigree, and I wasn’t treated that bad, but here I went from winning the Super Bowl, to picking Sterling up from the airport, or picking Sterling up at the hotel. Getting Sterling diet soda.

“I learned what it meant to be a producer and Sean Coffey, the producer, was a really big help to me. I think they paid me about $70 a week. The money didn’t matter. I was learning. I hated fetching stuff—I did—but it’s something I knew I had to do. If you messed up, you would be cussed out. I was cussed out a few times by Sterling, because I didn’t put the right name on things I produced.”

By 2011, Brooks became a full-time content producer. It was Sharpe and Ron Jaworski who integrated Brooks more with NFL Matchup and Jaworski would give Brooks reps on the radio about offensive line play. When Comcast heard him, they loved him.

By 2012 and 2013, Brooks was making sporadic appearances on Daily News Live on what was then Comcast SportsNet before it converted over to NBC Sports Philadelphia. On weekends, he would do radio hits with Devon Givens on 97.5 The Fanatic and his brand began rising.

In 2015 came the breakthrough with Brooks being part of a package with Breakfast on Broad with Rob Ellis, Sarah Baicker and Jillian Mele. In 2016, the crew garnered a local Emmy Award for their work, then the show was cancelled.

Brooks, however, had already started on Eagles Postgame Live a year earlier. He also now co-hosts a daily show with Eytan Shander and Harry Mayes called "The Middle" covering all things Philly sports and beyond.

If you placed his playing career against his broadcasting career, the bios would be parallel to one another.

“Barrett is very underrated,” Didinger said. “As a broadcaster, he’s really the way he was a football player, an extremely hard worker who is very conscientious to put in the time, and cares about doing a good job. He takes his job seriously, and keeps working and working to get better.

“Barrett really wants to be good at this, and I really respect his work ethic. Not every player who transitions into broadcasting is willing to put in the time. To be really good at it, you have to prepare for every game and every situation, and Seth and Barrett do that.

“Barrett definitely gets it. What goes beyond everything with Barrett is who he is off screen is who he is on screen—he’s a terribly likable guy. He’s a good person to me, and that comes across to the viewers. If things are bad, Barrett will tell you that they’re bad.

“Our crew has some big personalities. You can’t get any bigger personality than Seth. He was a great player and everyone knows how hard Seth played and he has strong opinions. He casts a long shadow, and Michael has real credibility who has been around forever. With Barrett, he brings the offensive side of the ball and he brings a nice balance to our table.”

“What I really admire about Barrett is that he’s paid his dues in this business. Nothing was handed to him.”

There were often two lights on into the wee hours of the morning at NFL Films offices, Didinger noted, Baldinger and Mike Mayock, when he was an analyst for the NFL Network.

"Everything Barrett has done has been on his own... Many former players are entitled [bleeps] in this business that didn’t do the work. That’s not Barrett. He’s the complete opposite." —Brian Baldinger

“Barrett was a great guy as a player, and he can explain things,” Baldinger said. “After he retired, he wanted to get into the media, and he approached me I told him how hard it is. I told him to come over and watch what me and Sterling were doing, and he came over.

“We would get Barrett in front of the camera. He got a chance to get some tape. Sterling and I worked with him. Everything Barrett has done has been on his own. No one was happier than me and Sterling when he got the gig at Comcast.

“When Sterling and I would tell people to be there at 7, they better be there at 7. Barrett was there at 7 every day. Many former players are entitled [bleeps] in this business that didn’t do the work. That’s not Barrett. He’s the complete opposite.”

To this day, Brooks will be the first to thank Sharpe and Baldinger.

“Sterling put me through it—and he’s a big reason why I’m here,” Brooks said. “Sterling is a great dude. I wasn’t comfortable at all on air at first. Sterling helped me break through that, by making me break down plays on the telestrator. He did it on his own time, too. I’m not here without Sterling, Baldy and Sean Coffey—and I think about my journey all of the time.”

Smiling in the drive-thru.