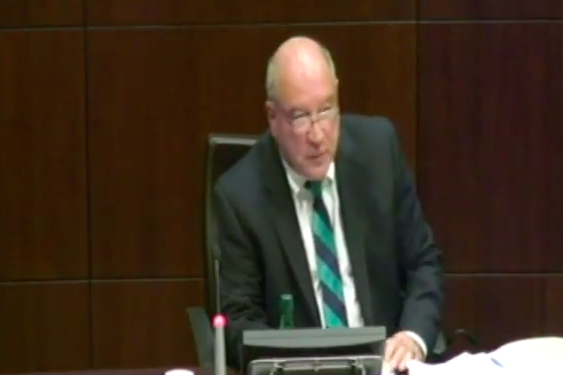 Former Radnor Township Commissioner Philip Ahr is shown leading a board meeting on Sept. 11, 2017. Federal child pornography charges filed against Ahr were made public in an indictment unsealed on Wednesday.

Ahr is already charged in Delaware County of sending and receiving hundreds of internet images and videos depicting children engaging in sexual acts. He is awaiting an April 23 trial on charges of child pornography possession and distribution.

But it's now clear that Ahr also faces trouble at the federal level, stemming from his initial arrest in October 2017. The indictment, filed Feb. 15, charges Ahr with two counts of receiving child pornography, two counts of distribution and one count of possession.

The federal charges bring more severe potential penalties. If convicted, Ahr faces between five to 100 years in prison; five years to a lifetime of supervised release; and $1.25 million in fines.

Ahr made his first appearance in federal court on Wednesday, according to a press release from the U.S. Attorney's Office in Philadelphia. He was detained on the government's request pending a detention hearing scheduled for Monday.

The press release stated that the FBI investigated the case in conjunction with the Delaware County District Attorney's Office and the Internet Crimes Against Children Unit.

Last fall, the Delaware County DA's office alleged that photos and videos found on more than 1,000 links on Ahr's computers mainly depicted prepubescent girls – but also infants and toddlers – being sexually abused by adult men and women and posing in sexually explicit positions.

Nearly two weeks after those charges were filed, Ahr resigned as Radnor Township Board of Commissioners president on Oct. 23 for "personal reasons" but was to remain commissioner. He resigned from the board entirely on Nov. 6.