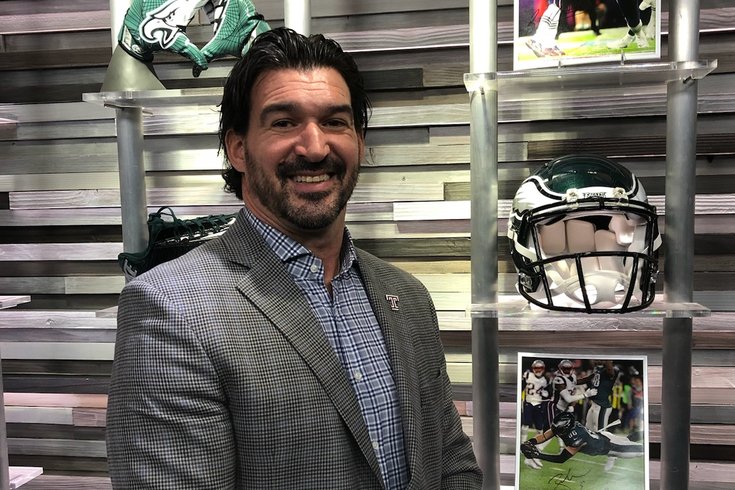 Gabe Infante won National High School Coach of the Year after being nominated by the Eagles.

The dimly lit winding backroads can become a little blurry at odd hours of the night. That’s where former St. Joseph’s Prep coach and current Temple running backs coach Gabe Infante finds himself again — on the backroads, learning, growing and combing all of the nooks and crannies, mining every high school in the country for talented players to fill up new Owls’ head coach Rod Carey’s roster.

Infante, 46, had amazing success in nine years at St. Joe’s Prep, which included four PIAA state championships, a 91-22 overall record, a .805 winning percentage, and a 27-game winning streak — not to mention countless young men that he impacted.

This is new terrain for Infante, who stepped down as the Hawks’ coach in December to become a part of then-Owls’ coach Manny Diaz’ staff, only to have Diaz leave 18 days on the job to take the newly vacated position at Miami and eventually be replaced by Carey on January 11.

It’s been a whirlwind for Infante, who was retained by Carey and switched from linebackers coach to the running backs coach.

It’s meant Infante had no time to get himself acclimated at Temple, since the national letter of intent day was Wednesday, February 6. It meant being on the road and getting right to work.

Hired during prime recruiting season, his biggest challenge so far has been getting a full grasp of his role and learning about the nuances of being Division I college football coach.

“Like everything, the biggest adjustment was about organizing time and prioritizing my schedule,” Infante said. “The biggest thing is learning and working at the same time, and fulfilling my responsibilities. There are things that I need to learn, and things that I need to manage as I hit the ground running, which can be tough.

“When coach Diaz left, I always had the support of Temple. I was committed to the school, which gave me the opportunity to stay home and remain in the community I’ve been in the last nine years. It was much more with that. My daughters are the most important pieces of my life, so staying in the area was very important. I never doubted that Temple would honor the original agreement we made. My commitment has always been true, and Temple’s commitment to me has always been true.”

Carey and Infante first met in Carey’s office one evening when he first arrived at Temple. Infante liked what he heard from Carey, who came to Temple after coaching six years at Northern Illinois University.

In the brief time Infante has been on Temple’s staff, he’s connected well with the players. He said the Temple players have much in common with the kind of young men he encountered at St. Joe’s Prep.

I love learning and I love being challenged. All of a sudden, being in this situation again has awoken a part of me that’s been dormant for a while... It was time for me to move on and take my next step

“Being on the road has been a new facet for me,” Infante admitted. “There’s no chance to catch your breath and learn how to do it, while you’re installing a new offense. Time will slow down and I’ll know how to attack and prioritize things. As a high school coach, you have a routine and know the routine already.

“I don’t have that luxury yet.”

After 23 years in coaching, Infante finds himself refreshed.

“I’m never going to take for granted the experience I had coaching high school, and my time with those kids, that will be a part of me forever,” Infante said. “This is a whole new world where all of a sudden, I’ve become an assistant again at the age of 46. What’s neat about it is having a new perspective at this age, and being in a situation where I am learning again, where I’m not the senior statesman in the room, sort of speak.

“I’m a room where everyone is accomplished and have succeeded in their own right. Being able to sit with the group we have at Temple and learn is very invigorating. I love learning and I love being challenged. All of a sudden, being in this situation again has awoken a part of me that’s been dormant for a while.

“This is kind of cool — it’s different.

“It was time for me to move on and take my next step. And it’s time for Tim Roken to take his next step (as the new Hawks’ head coach) and have the Prep program evolve again.”