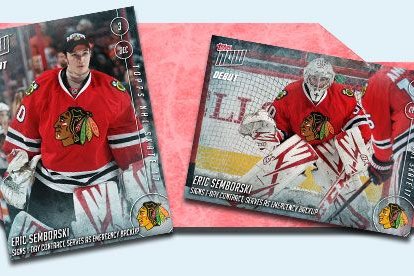 Eric Semborski has his own trading cards now.

By now, you may have heard the story of Eric Semborski, the former Temple netminder who had the opportunity to suit up for the Chicago Blackhawks as the backup goaltender after Corey Crawford was forced to undergo an emergency appendectomy.

One minute, Semborski was coaching at Flyers Skate Zone on a normal Saturday morning. The next, he was warming up with the likes of Patrick Kane and Duncan Keith, playing for an organization that won three Stanley Cups since 2010 (sorry for the reminder, Flyers fans). And after the Flyers earned a 3-1 win, the Bloomsburg native went back to his life with an incredible experience.

And now thanks to the folks at Topps, Semborski has his own official NHL trading card. Two of them, actually:

This is awesome. Thank you @ToppsNHL for making a free card of @NHLBlackhawks emergency goalie Eric Semborski. pic.twitter.com/GAnIdQXZOh

If I were Semborski, I would carry approximately five of those things in my wallet for the rest of my life.