Forum on racism in Philly's LGBT community gets heated

Call for boycott of gay clubs during this weekend's Outfest

It had been almost a year to the day that Philadelphia Black Pride gathered in the same ballroom at the William Way LGBT Community Center to discuss racism in the LGBT community.

On Thursday night, people of all colors, many nervous nightlife workers and others showed up to the center on Spruce Street to have yet another conversation about the subject, this time precipitated by a three-year-old video that surfaced in recent weeks of iCandy nightclub owner Darryl DePiano using the n-word to refer to black customers.

NEW PHOTOS: Scenes from Philly OutFest in the Gayborhood

Since the video was widely shared on social media, protests have erupted regularly outside DePiano’s establishment. Most recently, angry protesters entered his 12th Street bar to express their anger over what they allege are DePiano’s discriminatory practices against black patrons, a problem that many in the LGBT community say is persistent at other gay bars in the Gayborhood.

Citing a lack of response by LGBT and city leaders, the Black and Brown Workers Collective, Black Lives Matter and Philadelphia ACT UP have called for the resignation of Nellie Fitzpatrick from the city's Office of LGBT Affairs. Just this week, protesters interrupted an awards ceremony at the Hard Rock Cafe where Fitzpatrick was being honored as a trailblazer by the Professional Women’s Roundtable.

With a surplus of frustration to build upon, Thursday night’s race forum, paid for – interestingly – by the DePianos, was focused specifically on systematic racism in LGBT nightlife. With circular seating and two moderators (one black, one white), a few dozen people shared their personal stories, shed light on what many say are racist door policies and discussed how exactly black patrons are treated differently in mostly white male-owned gay bars in the city.

Several black gay, lesbian and transgender attendees recounted painful personal stories about being discriminated against, how racist tactics are more covert than ever and why black people are, quite frankly, tired of having to deal with so many “teachable moments.” The man who was referred to by the n-word in DePiano’s now infamous video quietly introduced himself and explained how much pain the video has caused him personally, both in terms of his job at the University of Pennsylvania and simply in the community at large. In a quiet voice, he said he feels “disrespected.”

“It takes a lot to change minds and behavior. But we need to call each other out on our s---.” – Braden Chapman

Rue Landau, executive director of the Philadelphia Commission on Human Relations and the Fair Housing Commission, a lesbian herself, laid down the hard facts about discrimination, saying that it’s not only illegal, but there are 16 protected categories.

“We want you to file complaints with us,” Landau said. “We need to know about it.”

She announced a public hearing on Oct. 25 at the Offices of Liberty Resources (112 N. Eighth Street, Suite 600) from 6 to 8 p.m. to give LGBT community members and allies a chance to air their grievances formally to the PCHR.

Braden Chapman, the "RuPaul’s Drag Race" alum better known as Mimi Imfurst, also shared his frustration over complacency and why it’s up to everyone to speak out against racism in establishments that are supposed to be safe spaces for the LGBT community.

“It takes a lot to change minds and behavior,” Chapman said. “But we need to call each other out on our s---.”

He asked that his peers in the industry hold each other accountable, a sentiment that was echoed throughout the two-hour-plus event by many other performers, bartenders and the one club owner who showed up, Jeff Sotland, owner of Tabu on 12th Street.

“I know blatant racism when I see it,” Sotland said. “But I don’t know covert racism.”

He talked about the time he pulled a comedy show at Tabu after a performer used the n-word on stage. He also banned a performer for 60 days for using the same word. Tabu has, he said, offered transgender sensitivity training, among other initiatives, with hopes of making the club inclusive. He encouraged everyone to let him know if he and his staff are not doing their jobs and if there are problems. Tabu is one of the few LGBT clubs in Philly that employs black and transgender bartenders and staff.

“Things are not going to change tomorrow,” Sotland said.

But in citing a one-night-only event this past summer that raised millions of dollars for the victims of the Pulse nightclub shooting in Orlando, he’s hopeful that “ bar owners are capable of doing very good things” when they work together. 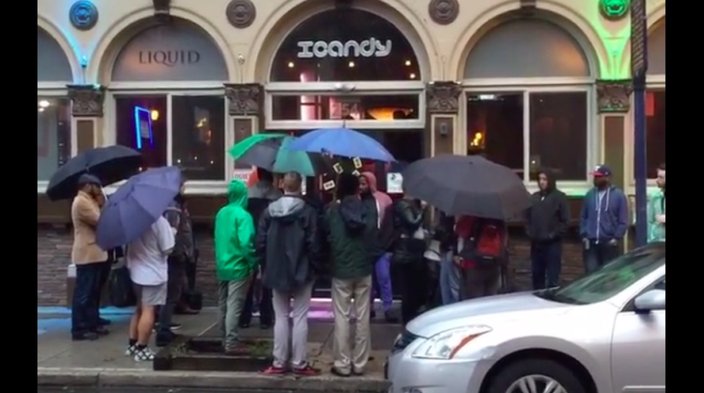 'THE SOUNDTRACK TO WHITE SUPREMACY'

For many within the community, progress has been a long time coming. One man in his 70s remembered fighting against racism 50 years ago. That he was sitting in the room Thursday night having the same discussion was disheartening, especially in a community that has made so many strides against AIDS and for equal rights like same-sex marriage. For elders in the LGBT community, it seems like racial discrimination has taken a back seat. And for the next generation, change isn’t coming fast enough.

“We have been feeling like this for a very, very, very long time,” said Aeryanah Von Moi, an actress and writer with the People’s Light and Theatre Company.

She said that the issue being addressed now in the Gayborhood isn’t simply about the owner of a club getting caught using the n-word but the more underhanded, sophisticated ways that racism takes shape.

Von Moi stood up and thanked the iCandy owner for showing white people that what black people have been saying for so long is very much alive and well. She said she is willing to forgive trespasses when people in positions of power – starting with the owners of these clubs – begin admitting there’s a problem and actually addressing it.

“I have a right to be angry,” said Dena Underwood, a local musician who sings and plays the piano at Tavern on Camac.

She said she regularly sees black patrons being treated differently by bartenders and customers at the club.

“I feel like I’m playing the soundtrack to white supremacy,” she said emotionally, alleging that black people get carded more than whites, white people regularly get promoted to the best slots behind the bar, and that white customers often don’t want to interact with black peers in the intimate music space.

So what can people do to change the status quo?

One suggestion that came from the forum was to boycott the LGBT clubs from Friday through Sunday, which happens to be Outfest, one of the LGBT community’s biggest, most beloved annual events where streets are shut down and people gather to dance and drink in the heart of the Gayborhood.

Pamela K. Williams, pastor of the Ark of Refuge Tabernacle in West Philly, solicited quite a few “amens” when she proposed the boycott, saying that she and her supporters will be outside clubs and on street corners in the neighborhood all three days to drive home the message that racism is unacceptable.

“I’m pissed off, too,” Williams said.

She called out the owners of clubs like iCandy, Boxers, Stir, Knock, Woody’s, Voyeur, UBar and Tavern on Camac, who did not attend Thursday night’s event. She said that’s why she wants to “hit them where it hurts the most” – on the bottom line. She asked that everyone in the room refuse to spend any money at these clubs for the next three days – and to pass along the message to everyone they know.

'MUCH BIGGER THAN ICANDY'

At one point, Williams spoke directly to DePiano’s husband, Michael, who was in attendance. DePiano admitted that Darryl DePiano, his husband and the iCandy owner at the center of the controversial video, did not attend because he has received death threats.

“We ain’t playing,” the pastor said.

David Lopez, who performs as drag queen Isis, took up the pastor’s pulpit with an inspirational call for love and change.

“There are two words we should be talking about,” said Lopez, “social accountability.”

Throughout the evening, black people within the community called on their white friends to step out, while several white people asked what they can do to make the atmosphere at these establishments more accepting. Issues like Woody’s “no Timberlands” policy, which has been outraging people since it was established many months ago, was called out as a not-too-subtle way of keeping black people out of the nightclub.

While the temperature of Thursday night’s event was heated from start to finish, most seemed to agree that the problem is endemic of a community that is expected to be far more open-minded and is failing miserably. More than a few attendees talked emotionally about how bad this makes LGBT people look in the eyes of Philadelphia at large and how exhausting it is for black people to be expected to accept racism as somehow “normal.”

“Our anger is justified,” said a young black woman, who was angry that the oppressed “have to turn around and give you an education lesson.”

Another man said that he’s tired of explaining himself. He wants more than an apology from owners like DePiano. He wants to see action.

“This is not an isolated incident,” Von Moi said. “This is much bigger than iCandy.”