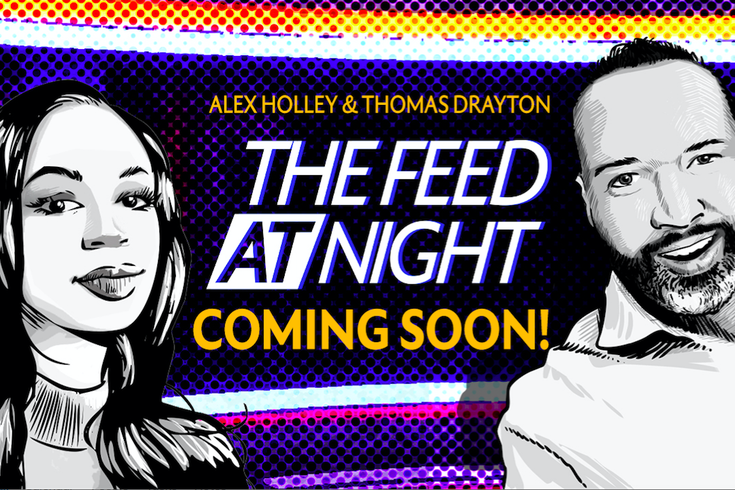 "The Feed AT Night," FOX 29's new late night TV show for the Philadelphia region, will premiere at 12:30 a.m. on Jan. 4, 2021. The show will be hosted by "Good Day Philadelphia" anchors Alex Holley and Thomas Drayton, who will dive into trending topics of the day.

The new show, called "The Feed AT Night," will be a half-hour program that airs weeknights at 12:30 a.m., the news station announced.

Holley and Drayton will provide a daily round-up of topics trending on social media, from news and entertainment to culture, sports and lifestyle. They'll share their opinions on newsworthy stories and videos from the day, turning to social media to fill out the conversation.

Some of the segments planned for the show include “Bad Day,” “Delete Your Account,” “Sliding in DMs,” and “Nosey Neighbors.”

Notable Philadelphians, celebrities and newsmakers also will join the show to weigh in on the trending topics of the day, the station said.

“As Alex and Thomas each continue to make their mark in the morning, they are ready to use that same energy and passion to dominate late night," said Jim Driscoll, FOX 29's vice president and news director. ‘The Feed AT Night’ will bring social media to life on TV for the viewers who are already scrolling their feeds before bed.”

The move — a late night TV show — represents something of a novelty in the Philadelphia news media market. Holley and Drayton have already cultivated an irreverent news and talk format alongside veteran anchor Mike Jerrick on "Good Day Philadelphia."

Holley, who joined FOX 29 in 2014, is an award-winning journalist and was honored earlier this year as a "Woman of Substance and Style," a distinction given as part of Philadelphia clothier Joan Shepp's celebration of influential Black women.

Drayton, an Emmy Award winner, is in his second stint with FOX 29 since first joining the station in 2008. He left in 2013 to work as an international network correspondent with Al Jazeera America before rejoining the FOX 29 news team in 2016.

“Now Thomas and I can start and end your day with some fun! Can’t wait for all of us to start scrolling on social media together,” Holley said of the new show.

“Alex and I hope you’re ready to jump into this fast-paced, late night, socially interactive show with us," added Drayton. "It's going to be a blast!"