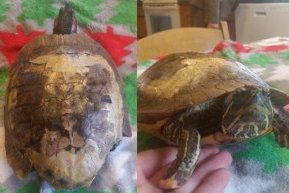 The PSPCA is seeking donations to fund Elsa's surgery to help remove some of the dead shell and tissue, as well as seal the cracks in her shell.

A rescued red-eared slider turtle found frozen solid in a tank on a Philadelphia porch has made an unlikely miraculous recovery, according to the Pennsylvania SPCA.

The PSPCA was alerted to the turtle’s situation last Wednesday and immediately intervened in an attempt to rescue and save the animal, which shelter staff aptly named Elsa, for Queen Elsa of Arendelle from Disney's movie "Frozen."

At the advice of an exotic animal expert at Penn Vet, the turtle’s medical care team exposed it to heat for an extended period of time in hopes of thawing and reviving it, “…and sure enough, within an hour or two, Elsa started blinking and coming to,” the PSPCA said.

The PSPCA added that Elsa has likely been frozen before “because she is missing her toes and her shell is badly damaged and bruised.”

Donations are being sought to fund Elsa's surgery to remove some of the dead shell and tissue, as well as seal the cracks on Elsa’s shell.

An investigation into animal cruelty charges is underway.

To donate and learn more, visit the PSPCA.