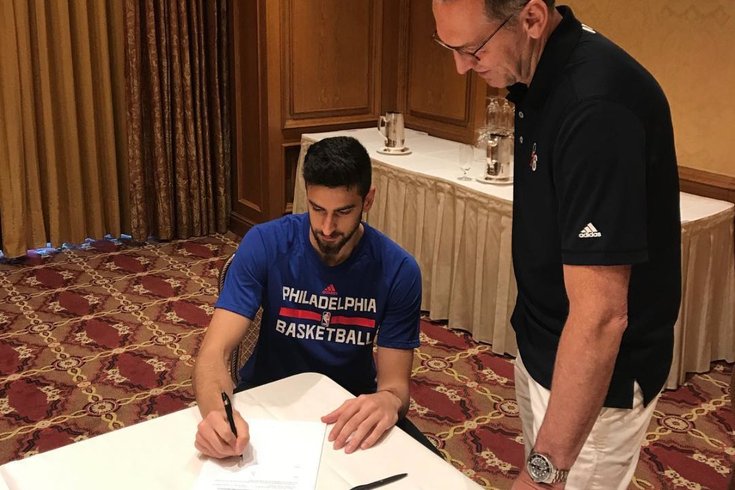 Furkan Korkmaz signs his rookie deal with the Sixers.

Ben Simmons wasn't the only 2016 first-round pick to never suit up for the Sixers last season. There was also Furkan Korkmaz, the 26th-overall pick, who was already under contract with Anadolu Efes over in Europe.

Like Simmons, who went 25 picks earlier, the 19-year-old from Turkey is expected to be available for Brett Brown when the season begins after buying his way out of his contract with Efes and signing with the Sixers on Tuesday – much like fellow European Dario Saric did a year earlier.

And while Simmons isn't playing in the Sixers summer league games, fans won't have to wait very long to see Korkmaz play alongside their other No. 1 pick, Markelle Fultz.

Coach John Bryant: "@FurkanKorkmazFK is in the fold and playing tonight. We are very excited."#SummerSixers

He's not just "in the fold" either – according to Keith Pompey of The Philadelphia Inquirer, the 6-foot-8 shooting guard is expected to start Wednesday night's game in Utah against the Jazz along with Fultz, Timothe Luwawu-Cabarrot, Alex Poythress and Kaleb Tarczewski.

"I can't wait to play tonight. It was my dream to be an @NBA player, so it's a very special day for me." #SummerSixers

But perhaps the best news for Sixers fans is the fact that Korkmaz will remain with the team going forward, rather than play for the Turkish U-20 team later this month as originally expected, a decision that was made by the Sixers after the deal was finalized. Here's more from Keith:

Korkmaz then will remain with the Sixers, who next will face the San Antonio Spurs on Thursday. They then will travel to Las Vegas to compete in the NBA Summer League starting Saturday.

The 19-year-old  originally was scheduled be with Turkey’s under-20 team, which will compete in the  U-20 European Championship from July 15-23 in Greece. But now that's he's under contract with the Sixers,  he would need their consent to compete in the U-20 competition.  The team decided not to grant that, thinking it was better for his development to be with its organization in the summer leagues.

The Sixers, however, will support his participating in the Eurobasket 2017 from Aug. 31 to Sept. 17 with the Turkish senior men's team if selected.  [philly.com]

In order to make this happen, Korkmaz needed to buy his way out of his contract in Turkey, which included a $2 million buyout. And since NBA teams are only allowed to contribute a portion – $675,000 to be exact – that means the rookie had to fork over more than $1.3 million of his own money just so he could join the Sixers. That's quite a bit more than the $450,000 Saric spent last year to buy out the remainder of his contract.

Korkmaz spent most of last season playing for Banvit of the Basketball Champions League while on loan from Efes.

And as you can see from those stats, his shooting ability is reason for excitement. And his starting backcourt mate for Wednesday night's summer league game (9 p.m. on TCN) is already a fan of the Turk's game.

He shot 48.8 percent from three-point range during his BCL stint. His offensive productivity there already has teammates here feeling excited about what the future holds.

“First of all, he's a great shooter,” fellow rookie guard Markelle Fultz said. “He can really shoot. He does more than that too. He can get to the rim and all of that. He's a great kid. He's cool. He came in really friendly and all that. Seems like a cool guy. I'm looking forward to playing with him and getting him the ball and getting me some assists.”   [John Coon, CSNPhilly.com]

As for where he'll fit into Brett Brown's rotation once the rest of the veterans join the team, you can check out Rich Hofmann's newly updated depth chart.

And because it's worth watching again and again, here's the time Furkan Korkmaz won a dunk contest dressed as Darth Vader.