Further down the spiral: Player grades, analysis for Portland 3, Union 1 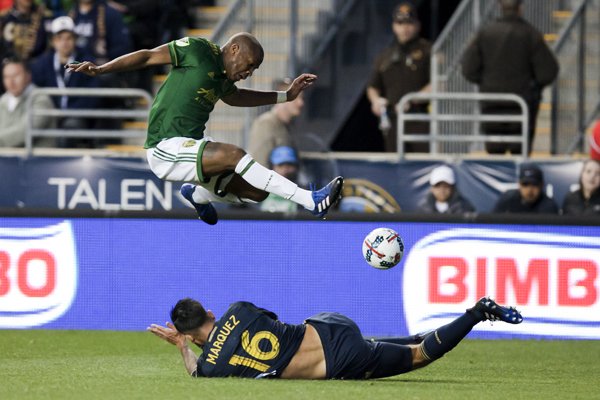 The Philadelphia Union lost a third straight game on Saturday night, remaining at the bottom of the Eastern Conference with two points in 2017.

Watching the game for a second time, I actually don't think the Union played that poorly in a 3 to 1 home loss against the Timbers.

Did anyone think that Philly was better than Portland, a team with superior attacking quality and chemistry?

Probably not, but you still had the benefit of playing at home against a West Coast team.

For the fifth straight game, Jim Curtin rolled out a lineup with little variation, starting C.J. Sapong over Jay Simpson but keeping Alejandro Bedoya at the less-than-ideal number ten position. The result was much of the same, with few clear-cut chances being created from the run of play.

After the second goal, the Union got a bit of a boost with a pair of attacking substitutions, but just lacked ideas and precision going forward. Philly finished with four shots on goal, with defenders accounting for three of those and defensive midfielder Haris Medunjanin claiming the fourth on a free-kick attempt.

Four starters and three substitutes, all of whom played as part of the front four, finished with zero attempts on goal.

One of my favorite MLS stats is the "key pass," which is defined as a pass that leads to a shot.

In Bedoya's passing chart, which you see below, the key pass shows up as a yellow box with a yellow arrow. He was credited with one of these right around the Portland penalty area in the 17th minute of play.

For the rest of his passing attempts, I count 35 of 46 completed with little activity in the final third, which is what we've come to expect from a guy who is basically playing out of position. For what it's worth, he spent 64 minutes in the number ten role, then moved back to the number eight after the attacking double-switch. 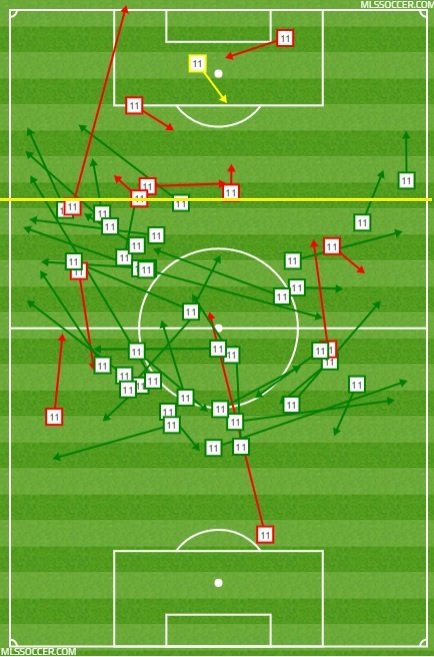 A key pass can come from a beautiful through ball, a field-switching diagonal, or even a ball that accidentally comes off a shin or head. There's no real distinction here, so context is important.

When I went back and looked at the play, it's a Union corner that falls in the box, Bedoya turns to try to get a foot on it, and it ends up on the foot of Ilsinho for a blocked shot.

I wouldn't look at that sequence as Bedoya creating a scoring opportunity. He does keep the sequence alive, for sure, but it's not the same as a nifty pass from the run of play.

You wouldn't know from looking at the chart, so we do have to be careful with how we view key passes. In the case of Bedoya, a player who does a lot of things that don't show up on the stat sheet, it makes that context even more important.

When a shot is not a shot

Bedoya finished the game with one shot attempt, which is also misleading.

The sequence took place right after the Portland equalizer, with Fabinho coming down the left flank and lumping a cross into the box. Bedoya loops a challenged header wide of the post and Jake Gleeson keeps the ball in play.

The concept is similar here.

When we look at the stats, it's easy to say, "well, this player did have a key pass and a shot attempt."

It's the same with Medunjanin, who was credited with a key pass for simply rolling the ball to Ilsinho last week before a 50-yard chip attempt.

Is that really a goal-scoring opportunity?

The generic box score also doesn't differentiate between blocked shots and shots that actually make it to the goalkeeper or endline, so that's also something to look at. There a million different reasons why context is king when analyzing this 2017 Union team.

Active early and often, Sapong put on a target man clinic through the first 20 minutes. His brilliant backheel in the 8th minute played in Fabinho, who had his shot saved by Gleeson.

One thing I've noticed about Sapong this year is that he seems to be trying different things. A backheel with back to goal? Cutting onto his right foot to create his own shot inside the box?

Even without scoring in this game, he's still playing at a relatively high level.

He earned the corner leading to the Union goal, which was the only tangible contribution that I saw.

Pontius finished with one shot attempt, which was a blocked 30-yard effort. He twice lost the ball on the dribble and didn't have much of any activity inside the box.

We talked about the key pass and the shot attempt.

He moved back to the #8 position after Curtin's double-switch and he looked much more comfortable in that role. I think, at this point, we all know that Bedoya at the ten just isn't going to work out.

I actually think one of his better contributions was the two separate occasions where he flicked-on Rosenberry long-throws. There just wasn't anybody there to capitalize.

A fairly typical Ilsinho game, with some flashes of skill, a few shot attempts, and no end product to speak of. He did lead the team with three efforts, two of which were blocked and one that sailed just wide.

His interchange with Rosenberry up the right flank was practically nonexistent due to the fact that the Union fullback wasn't getting into advanced positions (more on that below).

He probably could have done better on the first Portland goal, since he was in position to win a tackle and take the ball before Darlington Nagbe's shot attempt.

Otherwise, he did what he usually does, which is play a simple and conservative game.

Problem is, he offers nothing going forward and you're already stuck with Bedoya playing out of position. If Curtin changes things up in the coming weeks, Jones has to be the first one to come off the field.

This sequence is a good example of the issues going forward, with Jones sliding the ball wide, taking the space going forward, then showing a lack of urgency once he gets there. It doesn't help that Ilsinho points towards the corner and then plays a poor ball in there.

You could say that his dead ball delivery was the Union's biggest threat on the night.

He got the assist on the team's only goal, which came a few minutes after he went close on a free kick that Gleeson did well to save.

Medunjanin did seem to wear a bit in the second half, and his play style does create some tactical issues with the deployment of the team, but he's certainly not the biggest issue right now.

The reason he's not getting forward effectively is because he's playing next to a less mobile center back.

With Josh Yaro in the lineup, Rosenberry can bomb the flanks with Yaro cleaning up behind him. With Onyewu at right center back, Keegan has to play a more conservative game.

Onyewu's game was defined by the battle with Fanendo Adi.

The only battle he lost against the Portland striker lead to a set piece that was converted for the game-winning goal.

A mixed bag for the Union goal scorer, who clinically knocked that header into the corner.

Richie's first goal of the season gives us a 1-0 lead.#DOOP https://t.co/MXwKRUDbdN

Defensively, he probably should have stepped quicker on the Nagbe goal, but looked to be slightly thrown off when Jones made the original tackle attempt. The shot ended up going through his legs from 21 yards out. There was another situation where Fanendo Adi had time to turn and shoot inside the box while the backline was looking for an offside call.

Marquez may have been unlucky on the second Portland goal, which involved a spectacular service from Diego Valeri. That ball is incredibly difficult to defend and I'm stunned that Roy Miller received credit for the goal.

He had an early shot attempt saved, then made a goal-saving tackle on Valeri after Marquez couldn't win the ball.

Everybody will point to the ghastly mistake he made on the third goal, but he didn't play that poorly before that. He held Blanco, the right-winger, to one shot on goal.

Offensively, though, he wasn't able to get much going against Alvas Powell.

2016 was Fabinho's best year in a Union shirt but he's been slow to start this year.

Could he have done better on the Nagbe goal? I feel like that's one he normally saves.

He did do a nice job to close down the space on Blanco after Valeri played him into the left channel with a 53rd-minute through-ball.

No, it wasn't a great free kick, and I probably would have let Medunjanin hit it with his left foot, but Alberg has to get on the ball at some point. His only other shot attempt in a 26-minute appearance was a sliding effort that was blocked at the edge of the area.

Fitness issues aside, we know he's a better choice at the ten than Bedoya, so it's at least worth a try.

Didn't see a ton of the ball after coming on, but I'd start him over Pontius at this point.

His first touch was smart hold-up and switch of play.

I counted two sequences where balls were knocked down into the box just out of his reach. The first was Sapong coming right to the left, and the second was Marquez actually heading a ball towards the six that Portland was able to clear.

I thought he made the correct call on the Guzman yellow, which was a yellow card and no sending off for denial of a goal-scoring opportunity.

I also thought he was correct in not cautioning Ilsinho for a strong second-half win against Marco Farfan.

You could dispute the penalty kick, which may have come from contact that happened outside the box, but it looks like he made the right call there. Video replay would have taken care of that sequence.