'You get the history of the Jersey and you get to drink!' 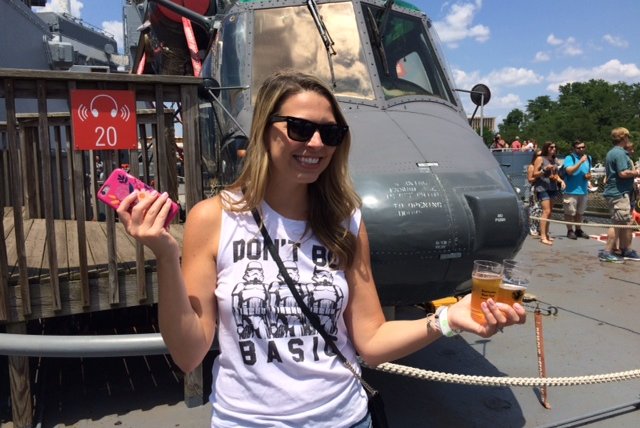 Kristie Mellish explained the appeal of the Battleship Beer Fest on Saturday. “You get the history of the Jersey and you get to drink!”

Kristie Mellish, juggling two glasses of beer in one hand and texting with her other hand, succinctly explained the appeal of the Battleship Beer Fest on Saturday.

“You get the history of the Jersey and you get to drink!” said the Haddon Township resident, who was aboard the U.S.S. New Jersey in Camden with co-workers from Center City.

“How can you not love it?” asked Mellish rhetorically, having been aboard the battleship before for a previous beer festival.

Related story: The science of beer....

Don Russell oversees – well maybe in the case of the oceangoing battleship it is overseas – the Garden State Craft Brewers Guild, which arranges for the venue and the beer. He said the festival is an important showcase for New Jersey’s blooming beer business.

“There are so many new brewers in New Jersey. Every month it seems like we add another,” added Russell.

“And with Philly so close, it brings in a lot of people who are not familiar with our Jersey-fresh local beer,” added Russell, peddling beer T-shirts faster than a Wildwood Boardwalk vendor.

He said the appeal of the festival is meeting lots of brewers at one venue. And the brewers tend to either bring their marquee beer or an obscure brew or a one-off available only during the festival.

That might include Kane Brewing Company’s Sunday Brunch, a delicious award-winning porter from Monmouth County that is doused with maple syrup and cinnamon and hard to come by, or Mount Holly’s Spellbound with its vanilla porter aged in a Buffalo Trace whiskey barrel.

For Greg Yingling – yes, he gets the irony of just how close his name is spelled to the largest regional brewery in the area, Yuengling – the assistant brewer of six-month-old Double Nickel in Pennsauken, the festival is about camaraderie without competition.

“It’s nice to see all these breweries, all these people in Camden,” Yingling said of the crush of eager beer drinkers crowded onto the ship's fantail.

“It’s really unique. It is a close-knit network of friends, friends who respect each other,” said the brewer of his colleagues.

At more than two years old, brewer Vince Masciandaro’s Village Idiot Brewing Company in Mount Holly is like an elder statesman in the brewing community of Southern New Jersey.

“The appeal is you can drink local, fresh-made Jersey beer,” he said of the festival.

And while there were not completions for best brews, the crowd aboard the Big J clearly liked the court jester emblazoned on Village Idiot’s T-shirts.