GeoGuessr game: How well do you know Philly streets? 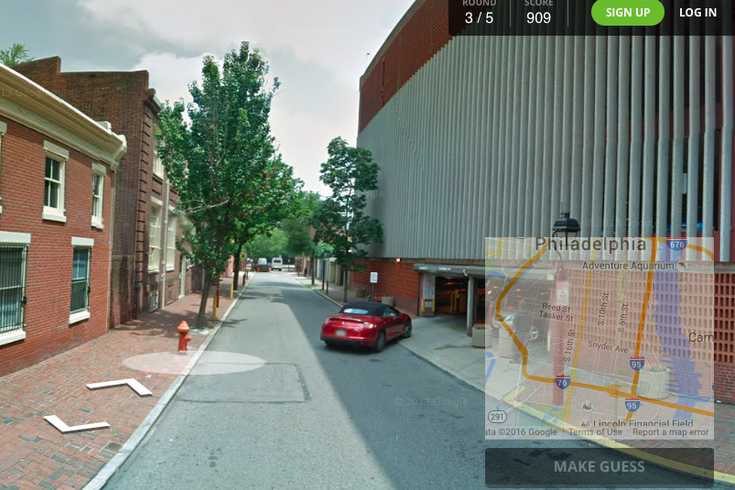 From sight alone, would you be able to guess that this is Delancey Street near Pennsylvania Hospital?

The term "street smart" can have a few different meanings, and it's debatable which one is the best trait to possess. People who understand local customs, use them to their advantage and can detect potential dangers from a mile away are street smart in a rugged, battle-tested way. Speaking more literally, street smart refers to a person who not only knows their way around but can navigate short-cuts and casually rattle off anecdotes about surrounding landmarks with encyclopedic depth.

If you're wondering whether you can lay claim to either of these definitions, here's a fun way to get a gauge on your visual intelligence: the Philadelphia GeoGuessr game. The Google Streetview-based activity, developed by Swedish IT consultant Anton Wallén, puts your directional abilities to the test with a series of randomly selected locations throughout the city.

For each question, you have the freedom to zoom around and get a 360-degree view of the scene before placing a pin on a map at the lower left corner of the site. Depending on how close your guess is to the actual location, you're rewarded between zero and 5,000 points. Most of the locations aren't just softballs like the Philadelphia Museum of Art or Independence Mall, either. It's recommended that those who play look for clues in the signage, architectural features and vegetation in the area.

Since Wallén's experiment went viral in 2013, he and his team have expanded the GeoGuessr to include a worldwide game and several versions tailored to specific countries and a few other cities besides Philadelphia. You can play single-player mode or if you want to make it a competition, challenge a friend to see who's the true champion of Philadelphia geography.