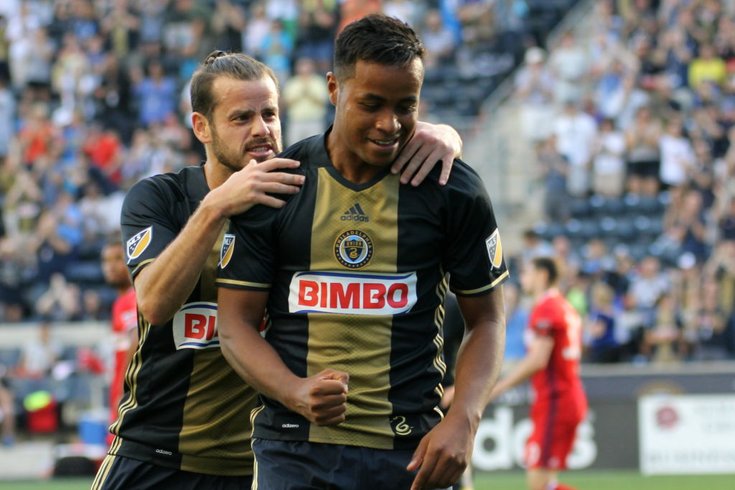 Roland Alberg's hat trick propelled the Union to a 4-3 win against the Chicago Fire on Wednesday night.

Like most defenders that become managers, Jim Curtin loves to win a 1-0 game.

Why wouldn't he? Every 1-nil result gives you three points, a clean sheet, and a +1 to your goal differential.

Teams have won championships on the back of 1-0 results. Just look at what Leicester City did this season or watch film of David Beckham's 2011 Los Angeles Galaxy.

But teams have also won championships by beating the snot out of their opponents with offensive firepower, and that's what the Philadelphia Union did on Wednesday night.

A 4-3 win provides the same amount of points as a 1-0 win, and while Curtin wasn't happy about the defense in this one, his team remains atop the Eastern Conference.

That's the sign of a coach who is learning to evolve. Curtin desires team defense and a well-maintained shape. In this game, however, he recognized that his best available personnel provided enhanced attacking capacity at the expense of defensive cover.

Curtin deviated from his comfort zone, put his best eleven players on the field, and won the game. He deserves credit for recognizing that and taking the risk.

Maybe it was reaching a point where fans and media were starting to question this signing, but those thoughts are now officially squashed.

Alberg's hat trick was the first at Talen Energy Stadium and only the second in franchise history. His action chart is a work of art and deserves to be blown up, printed out, and tacked to the wall in the Union's training facility. 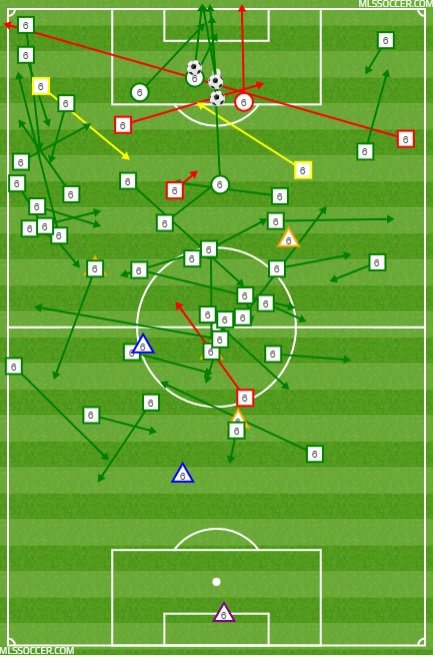 This diagram (right) is freakish in nature.

Maybe the most telling thing about that chart is the defensive contribution. Keegan Rosenberry made sure to point out the first-half hustle play where Alberg tracked back on a counterattack to clear a dangerous ball out of the six-yard area. In the second half, he also made two sliding blocks to break up Fire buildups in the Union's half of the field.

A guy who can give you goals on one side of the field, while also providing something defensively, is going to get a spot on any team, especially one coached by Jim Curtin.

This was an all-time Union performance.

Meet the new shape, same as the old shape

What if Vincent Nogueira's replacement was already on the team?

In all of our talk about “inverted triangles” and shape shuffling, Curtin's approach through the last 135 minutes has been to pull Tranquillo Barnetta deeper into midfield.

This was one the best Union movements of the game. With Ilsinho pinching inside to get on the ball, and Alberg and Herbers pulling wide, Barnetta recognizes that there's a HUGE vacated space to run into.

That's the kind of stuff Barnetta can do from that position. We began to see more of that from Nogueira as his game evolved in Philly, but Vince was first and foremost a deep-lying facilitator. Barnetta is a winger converted into a number ten.

Defensively, Tranquillo doesn't give you what Nogueira did, and he admitted that last night, explaining that his two-way contribution needed to be stronger. While Nogueira wasn't the guy to put in punishing tackles or win aerial duels, he was very smart in positioning and had an excellent understanding with Brian Carroll.

In truth, the best way forward for the Union would be to keep both Alberg and Barnetta in the central midfield and upgrade the number six spot with a rangy athlete. Maurice Edu can be that player. Warren Creavalle might be able to do the job.

Ideally, with a completely healthy Edu, the Union could run something like this:

Early on, it looked like he wasn't sure what run he wanted to make. This was a case of “zigging” when other players were expecting a “zag”. There were two to three occasions where he was not on the same page with Ilsinho, who did a decent job of masking his frustration.

Herbers figured it out for the Union's third goal when he peeled off brilliantly into the right channel to allow Barnetta into a vacated zone 14. Barnetta passed it off to Herbers, allowing him to get off a decent shot, forcing a save from Johnson and setting up Alberg for the put-back finish.

The Brazilian pulled off three nutmegs and two gif-worthy skill checks in this game.

He's the most technically gifted player the Union have ever had, but at some point, that flair needs to manifest itself in goals and assists.

Ilsinho is so fun. pic.twitter.com/QOv02VPJgz

Not much to add here. I guess I would point out that he accomplished everything in 77 minutes on the field.

It seems like a broken record, but here goes -

Pontius continues to make contributions without seeing much of the ball. In this game, he got his touches up to 49, which was much better but still below that of his midfield partners, some of who played fewer minutes.

In this game, he should get an assist for his dummy on the first goal, but that won't show up on the stat sheet. In the second half, he earns the penalty and steps aside for Alberg to complete his hat trick.

Again, another unselfish game for Pontius, who contributed to two of the four goals without getting statistical recognition.

Offensively he was very sharp, as usual.

Defensively, he's going to have to learn the nuances of his new position.

What can you really expect from Carroll in a game like this?

He performed well next to Nogueira, who really helped out defensively and understood Carroll's strengths and weaknesses. BC has been performing at a relatively high level for the last 18 months, but a stretched game against pacey attackers just isn't gonna work. He just couldn't keep up with David Accam on the first Chicago goal, despite having at least five steps on him.

Facing up against Kennedy Igboananike and Michael Harrington, Fabinho had the easier assignment of the two Union fullbacks.

He wasn't culpable for any of Chicago's three goals.

Marquez was on Fabinho's side, so he similarly saw a lot of less of Accam on the evening. On one of those clashes, he put in a perfectly-timed slide tackle to deny a scoring chance inside the box,

Marquez was much better in this one, especially after a poor game in New York City. One thing he can do better, however, is to try to marshal his team when he sees the defense starting to struggle. If the shape is going to be stretched, and players left to fend for themselves on islands, then he needs to work with Carroll and Andre Blake to adjust on the fly and try to patch things up.

This was a bad matchup from the beginning and Tribbett struggled because of it.

To be clear, David Accam is a bad matchup for anyone in the league.

Anyway, it looked like the game-plan was for Tribbett to close down Accam as soon as he received the ball. On the first goal, he did that well enough, but just didn't win the tackle. Later, he tried the same thing and fouled Accam in a really bad spot about 21 yards out.

Tribbett picked up a yellow card and came out at halftime, but he did make a very nice play on Razvan Cocis around the 34th minute, which might have prevented a goal.

Early on, when Tribbett was struggling with Accam, Carroll, or Marquez, or Blake, or anyone really should have told Rosenberry to just hang back and provide some help defensively until things could be stabilized. With Ilsinho not providing the same cover you get from Le Toux, Rosenberry should have been instructed to just be careful going forward because he won't get the same help he normally gets.

He doesn't bear responsibility on the second goal, but he does allow his mark to reach the ball on Chicago's third goal.

Offensively, he was unlucky later in the game and had a nice shot cleared off the line.

Blake has looked average since coming back from the Copa America.

That's not to say he's playing poorly; because he's not. We're just waiting to see those spectacular saves again.

Yaro helped clamp down on Accam, who was relatively quiet in the second half.

He does bear responsibility for the second goal, though, as it was his man, Cocis, who scored off a short corner routine.

He had a good chance around the 75-minute mark but laced a shot well wide from a prime position.

With C.J. Sapong missing, the Union really don't have another true center forward on the roster.

Defensive cover to see out the game.

Herrera took forever to blow the final whistle and seemed inconsistent with his foul calls throughout the game.