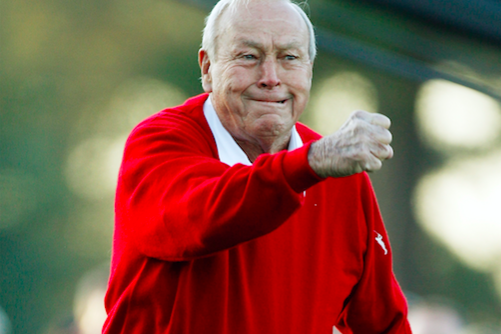 Arnold Palmer reacts after his ceremonial tee shot before the first round of the Masters golf tournament Thursday, April 7, 2011, in Augusta, Ga.

Legendary American golfer Arnold Palmer passed away Sunday at the age of 87 after a three-decade run as a maverick who defined the modern evolution of the sport.

In a tweet, the United States Golf Association expressed its sadness over Palmer's death.

We are deeply saddened by the death of Arnold Palmer, golf's greatest ambassador, at age 87. pic.twitter.com/iQmGtseNN1

A native of Latrobe, Pennsylvania, Palmer became a larger-than-life personality in his ongoing duel with Jack Nicklaus. After winning the U.S. Amateur Open in 1954, he turned pro and soared on his way to claiming every single major distinction in golf.

Nicknamed "The King," Palmer competed in his final Masters in 1984, completing a 50-year run as a qualified for the major championship at Augusta National Golf Club.

Palmer's health had been in decline for several months leading up to his death, though an exact cause was not immediately revealed.