Officials in Pa., N.J. preparing for worst from weekend blizzard

Government officials in Pennsylvania and New Jersey throughout Thursday announced their plans in preparation for the blizzard expected to blanket most of the region with more than a foot of snow this weekend.

The storm is expected to start after 10 p.m. Friday and continue through Saturday, ending early Sunday morning.

Philadelphia Mayor Jim Kenney at a press conference Thursday evening said, at least for now, the city is not declaring a snow emergency.

Such a move would require owners of vehicles parked along snow routes to move their cars or be ticketed and towed. Kenney said he would to wait until officials knew more about the potential blizzard.

He did say residents should prepare for the worst and be ready to help each other, if the area is indeed hit with the storm that many are predicting.

“I want all Philadelphians to take care of each other and be safe out there,” Kenney said. “... We are going to get through this as a city,” he said.

SEPTA is planning to run all trains, trolleys and buses as normal this weekend, said Clarena Tolson, Philadelphia's deputy managing director of infrastructure and transportation.

Tolson said the city is prepared to plow throughout its streets, with about 400 plows and 600 personnel at the ready.

Asked if the city wasn’t declaring a snow emergency because of suspicions the storm might not live up to predictions, Kenney demurred, saying that probably wouldn’t be the case.

“I would love for all of this to be wrong and the sun would come out and it would be 65 [degrees] on Saturday,” he said. “But, that’s probably not going to happen.”

The mayor said he expects to reevaluate the situation on Friday morning and will provide an update later in the day.

Pennsylvania Gov. Tom Wolf declared a state of emergency Thursday afternoon ahead of the storm, which he said would allow state agencies to quickly respond to snow-related problems. During a press conference, Wolf was joined by members of several state agencies, including the Pennsylvania State Police and the Department of Health, and he said municipal workers are prepared.

"We are ready, and we are going to keep adjusting," he said.

The National Weather Service is predicting 12 to 16 inches of snow could come down between Friday night and Sunday morning around the Interstate 95 corridor.  As much as a foot of snow is forecast for Philadelphia's northern suburbs.

Thursday morning the National Weather Service upgraded its weather advisory from a winter storm watch to a bizzard watch covering Philadelphia and most of the surrounding counties and nearly all of South Jersey.

"If you don't have to go out, don't," said Richard Finn, director of Pennsylvania's Emergency Management Agency. He told residents they should be prepared to remain in their homes possibly with no electricity. 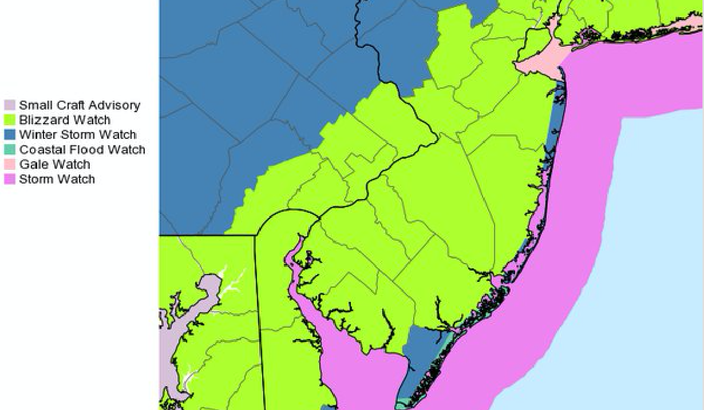 The National Weather Service issued a blizzard watch for Philadelphia and the Pennsylvania suburbs and South Jersey on Thursday, Jan. 21, 2016. Forecasters say the winter storm will arrive late Friday and continue through Sunday morning. Snow accumulations between 12-16 inches are expected.

Pennsylvania State Police will be on the roads this weekend making sure they remain safe, State Police Commissioner Tyree Blocker said. He urged residents to stay off the roads unless necessary.

"It's very important to be smart about travel during inclement weather," Blocker said.

"I can assure you that PennDOT is ready," Secretary Leslie Richards said, noting there is an "ample supply" of road salt due to the mild winter, so far. Hundreds of PennDOT trucks will be plowing and salting roads throughout the state during the course of the storm.

"The more traffic there is on a roadway, the more attention that [roadway] will receive," she said.

In the Philadelphia region, there will be 182 PennDOT-owned trucks plus 150 contracted trucks helping clear roadway, PennDOT spokesman Eugene Blaum said.

In New Jersey, Gov. Chris Christie is likely to declare a state of emergency that would authorize the director of Emergency Management to make resources available for rescue, evacuation, shelter, and essential commodities in coordination with county and municipal agencies, according to NJ101.5. But that move had not been made by Thursday evening.

At the public works complex in Lindenwold, Camden County, more than 90 pieces of equipment stand ready to clear county roadways. If the weather becomes treacherous, personnel will be dispatched to 12 winter maintenance districts t salt and plow 1,200 lane miles of roadways across Camden County.

The county’s response plan calls for crews to be dispatched only to the zones where they are needed.

In light of the high winds and heavy snow in the forecast, crews will ensure all chainsaws and chippers are tuned up for tree removal operations. Also, all mechanics will be called in to make sure plows and trucks stay on the road during the duration of the storm.

“Anyone on the roadways during these times should be prepared to encounter slick road conditions," Camden County Freeholder Shin Angulo said in a statement. "Remember to leave at least six car lengths behind our DPW vehicles while they work, and move any cars off the street and into a driveway while we continue our plowing operations. Remember that it is illegal in New Jersey to plow or shovel snow from private property into roadways.”

PECO, which provides electricity to 1.6 million customers in southeastern Pennsylvania, said it will have 2,400 employees and 500 contractors ready to respond to storm-damaged areas. The utility company also will have additional help available from electric utility company ComEd in Chicago, if needed, officials said.

The airline on Thursday announced a plan to reduce its flights Friday night and cancel all of its Saturday flights, according to the Philadelphia Business Journal.

In a statement, the company said that there is a high certainty the storm will "significantly impact our operations over the next several days."

Overnight flights between and Friday and Saturday will be canceled and operations are expected to resume Sunday morning to make up for cancellations. Customers booked to fly Thursday through Sunday received e-mails noting that the airline will waive all flight change fees.

Events scheduled to take place this weekend that have been affected by the expected blizzard include:

Check back for updates on more preparations and cancelations as this story develops.