Grading the Eagles at the quarter pole: Wide receiver edition 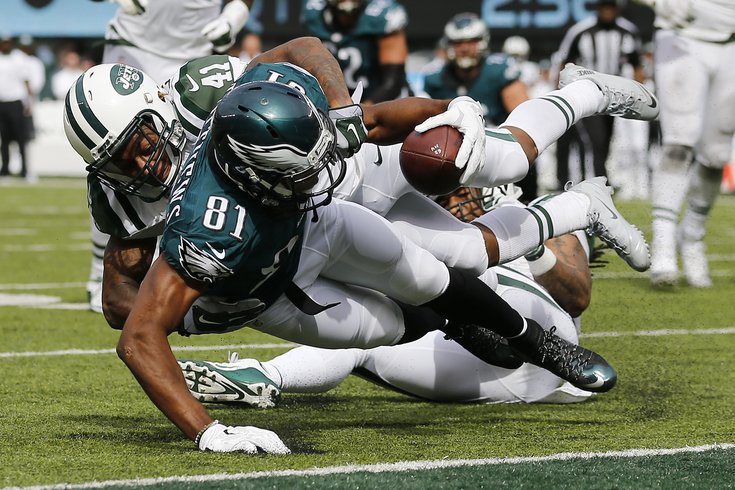 At the WR position, it's been Jordan Matthews, and not much else.

Continuing on with our "quarter pole" grades, we'll cover the wide receivers, which is something opposing defenses haven't had much trouble doing this season. In case you missed the first installments of this series, we previously graded out Sam Bradford, the running backs and the tight ends:

Onto the wide receivers:

Matthews leads the Eagles' receivers in catches and yards, by a mile:

Matthews is essentially carrying the Eagles' "wide receiver passing game," and he's doing it from the slot. He does, however, by my count have at least three drops this season, which prompted him to go to the NovaCare Complex on Monday to catch passes from Cody Parkey of all people. Matthews is going to be fine, but he needs help.

Agholor is really tough to evaluate. At times, he has gotten open and Sam Bradford has simply missed him.

However, I won't make excuses for him on the fumble on the reverse the Eagles tried to run against Washington Week 4, which was an inexcusable error.

Agholor is talented, and I believe that if the offense was more efficient he could be thriving. But at the same time, you would like to see him bail out his quarterback on a few off-target throws, which he has not been able to do.

The best blocking wide receiver in the history of the NFL.

Austin had a 39 yard TD reception against Washington that is fresh in everyone's minds, but it's been more bad than good when the Eagles have tried to get him involved. Against the Jets, the Eagles threw four times to Austin on third down, and completed none of them. Austin's fit on this team is odd. He's a reserve wide receiver who doesn't contribute positively on special teams. The Eagles paying him $2.2+ million this offseason still just makes no sense to me at all.

A few times a game, we see Cooper tell Huff not to take a return out of the end zone, but otherwise he's been invisible.