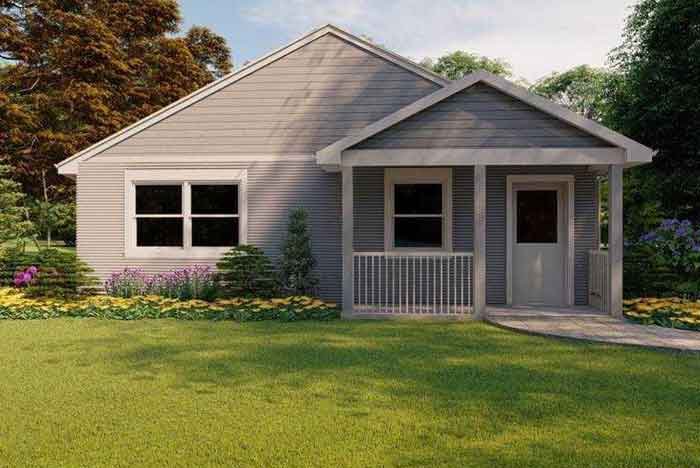 The marvel of 3D-printing has touched countless industries in the nearly forty years since the technology first appeared, from biotech to marketing and aviation.

But could robots be an antidote to the world’s affordable housing crisis?

The experiment is about to begin on Long Island, where eco-friendly real estate company SQ4D is set to debut its first 3D-printed house this spring, according to Newsday.

A listing on Realtor.com calls SQ4D’s planned three-bedroom, two-bathroom home the world’s first 3D-printed home for sale. The 1,407-square-foot home is on 0.26-acre lot in Riverhead and is listed for $299,999, an affordable property for the location and in today’s competitive seller’s market.

SQ4D touts the sturdiness and energy efficiency of its home designs, claiming they hold up better than traditional concrete structures and use a more sustainable building process.

The home in Riverhead is listed for sale despite not being constructed yet. That’s not a problem for SQ4D, which will take its robot to the lot at 34 Millbrook Lane and proceed to stand up the home in the span of just a few days in late March or early April. The company believes it can build homes up to 30 times faster than traditional construction, using a machine that only requires the same current as a standard hair dryer, with less than 10 gallons of fuel needed for the entire operation.

“What we’re doing is going to change how people look at housing,” SQ4D director of operations Kirk Andersen told Newsday. “We’re going to meet a global demand to produce affordable and sustainable homes.”

Is this really so far-fetched? Maybe not.

The supply of so-called “starter homes” has been dwindling in recent years, making it harder for first-time homebuyers to find properties they can afford. And with interest rates historically, competition among buyers for the homes that do exist is pushing prices out of their reach.

Much has been made of the need for new home construction, yet builders are often incentivized to create high-end homes in order to turn a profit. Meeting the demand for affordable properties has been less and less of a winning proposition for developers.

If buyers can get past the apprehension of living in a home built by a robot, and if early models prove to offer a stable and sturdy home environment, then 3D-printed homes could become a scalable way to quickly add affordable housing inventory where land is available and demand is high.

In an age of concerns about encroaching automation, the idea of disrupting traditional home construction may be of some debate. But the reality is that human labor is still an important piece of completing a 3D-home, and if traditional builders are not supplying the market with the kinds of properties most people want and can afford, 3D-printing should be a welcome wrench in the competition once it establishes a reliable footing.

Mass production of 3D-printed homes may be a distant consideration for now. Buyers of the future may be getting a glimpse of an alternative path to home ownership that they can afford.