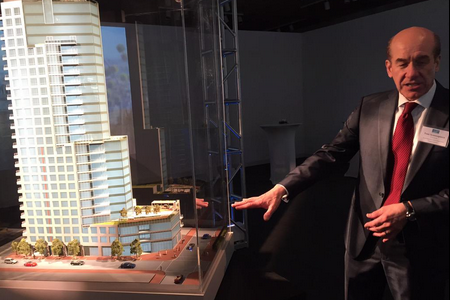 A 26-story building designed to overlook Independence Hall officially broke ground Thursday as Scannapieco Development Corp. held a ceremony for the $180 million high-end residential project.
Named 500 Walnut, the building will include 38 condominiums that range from $2.5 million to $17.6 million for a two-level penthouse with exclusive roof access, the Philadelphia Business Journal reports.
Designed by Cecil Baker + Partners, 500 Walnut will also have a rooftop terrace stationed behind a retractable glass wall. On the other side, an interior lounge will feature a direct view of Independence Hall. A boardroom, billiard room and library will also be housed in the tower.
Already, $25.5 million of $75 million in reservations has been converted into contracts.
According to Tom Scannapieco, CEO of the company developing 500 Walnut, the 4,000-sq. ft. terrace was specially designed by Baltimore architect Robert J. Gorman. It will feature as both an intimate space and a scene for parties and entertainment.
Thursday's groundbreaking ceremony was held at the National Museum of American Jewish History.
Read the full story here.