Handing out 10 awards from the Eagles-Colts preseason game 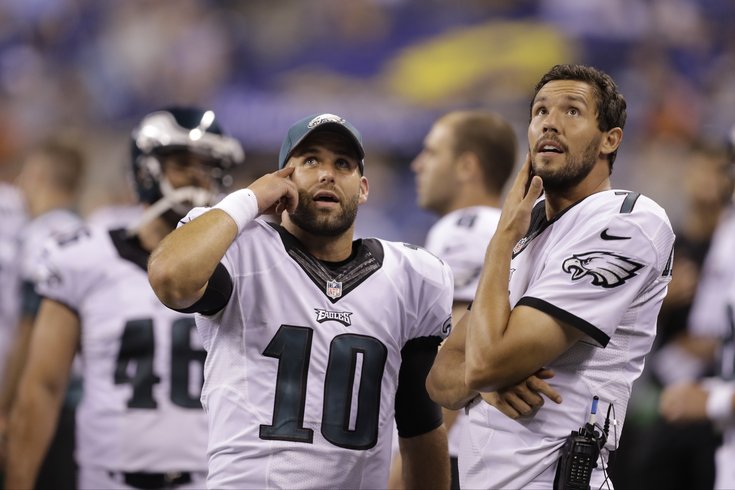 Sam Bradford and Chase Daniel watch the Colts' in-dome blimp, hoping it will drop treats near them.

Welp... The Philadelphia Eagles are 3-0 in the preseason again. Maybe this year we'll keep expectations in check. Or maybe not. As always, win or lose, we hand out 10 awards: 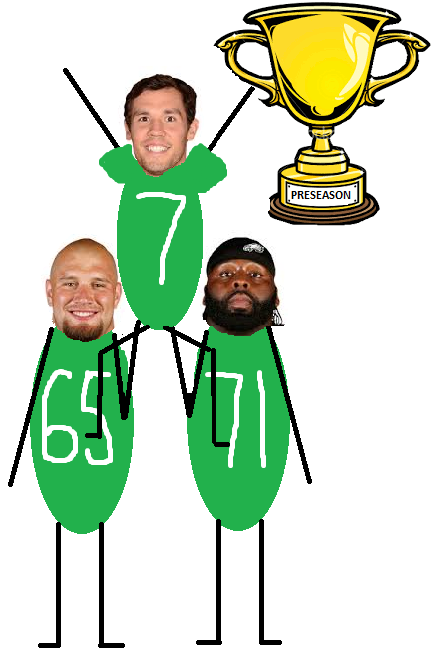 On a receiving corpse corps that lacks playmakers, Huff made two big plays. The first came on a quick slant in which Huff gobbled up a lot of yards after the catch. The second came on a jet sweep in which Huff scored a TD. Like him or not, Huff is going to make the team because he has the ability to make plays like that, whereas guys like Reuben Randle and Chris Givens have not shown much of anything.

The fade route is so effective because it's a play in which defenses know it's coming, but if your receiver has a size advantage over the corner, it's still incredibly difficult to defend. On his TD catch on a fade pattern, DGB made it look easy over a smaller corner.

While they "only" had three sacks, the Eagles' defensive line pressured Colts quarterbacks all night, leading to off-target throws. If the Eagles' front four can get to the quarterback without having to blitz, opposing offenses are going to have a lot of trouble moving the football this season.

Mychal Kendircks did not talk to reporters after the game, which could mean absolutely nothing, but it does at least raise eyebrows seeing as he was still in the game in the fourth quarter of a preseason game.

6) The Lockdown Award: The defense as a whole

Watch your back, Doug.

9) The 'Nail in the Coffin' Award: Caleb Sturgis

When Caleb Sturgis hit a 47 yard field goal, he all but ended the Eagles' kicking competition. As we noted in our game preview, since the beginning of training camp, Sturgis was 44/48 (91.7 percent) in practice (the ones open to the media, anyway), while Cody Parkey was 37/48 (77.1 percent). Both Sturgis and Parkey were 1/1 on field goal attempts this preseason, with Sturgis hitting from 42 and Parkey hitting from 40.

With Sturgis hitting the long field goal and Parkey missing a PAT, it would appear that Sturgis has the kicker competition on lock.

If the Eagles don't win three Super Bowls by Week 8, consider this season a major disappointment.