Eagles QB Carson Wentz on track to return for preseason finale vs. Jets 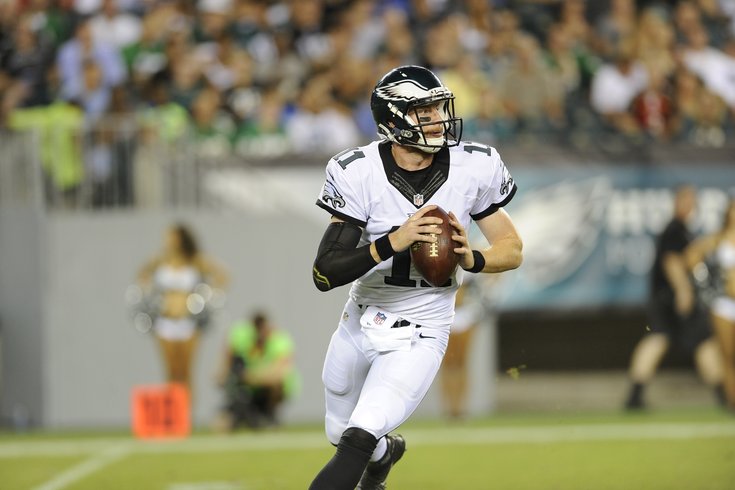 The strong play of Sam Bradford in the Eagles' 33-23 preseason win over the Colts wasn't the only good news on the quarterback front on Saturday.

Prior to the game, Carson Wentz was out on the field undergoing a lengthy workout and although he was never a candidate to play in the Eagles third preseason game, it was a good sign for the injured rookie. According to Dave Spadaro of PhiladelphiaEagles.com, Wentz is still on schedule to return on Thursday night against the Jets.

He's been sidelined since fracturing his ribs in his NFL debut earlier this month. Up until now, Wentz had done little more than some light throwing on the sidelines during practice.

This, however, can't be qualified as "light."

Wentz will need to be cleared by doctors before he can return to live action, but it appears that he's feeling pretty good -- at least good enough to air it out downfield. The final test will come in the form of an X-ray to make sure his fractured ribs have fully healed.

After the game, Pederson wouldn't definitely say that his rookie QB will play on Thursday night, but it's certainly starting to look like Wentz will see at least some time in the preseason finale.

“He worked out again tonight and went through a full workout," the first-year coach said. "He’s in a position to possibly play next week. He’s still a little bit sore, so we’ll monitor that. We’ll make sure he’s rested here the next couple of days.

"I don’t want to jeopardize [his health] by any stretch of the imagination. But at the same time, if he’s ready to go, he’ll play next Thursday.”