Handing out 10 awards from the Eagles-Commanders game 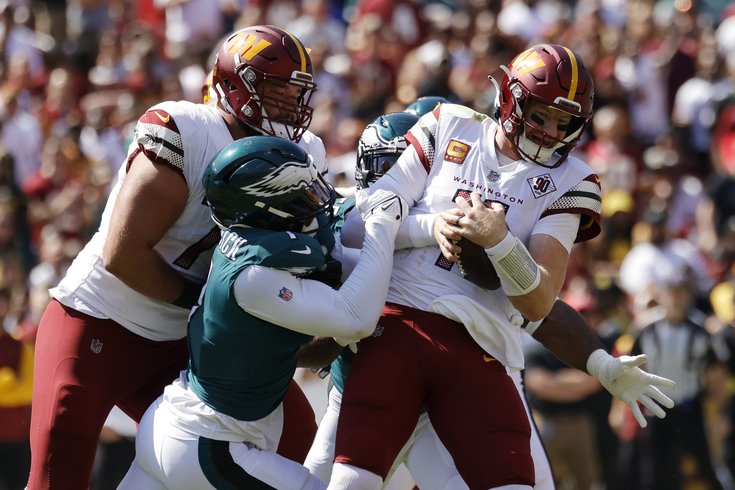 The Philadelphia Eagles are now a perfect 3-0 after a dominant 24-8 road win over the Washington Commanders. As always, win, lose, or tie, we hand out 10 awards.

Hurts was 22 of 35 for 340 yards, 3 TDs, and 0 INTs, which, yaaaaayyyy, stats. But beyond the numbers, Hurts demonstrated poise beyond his years on a sequence late in the first half.

On 3rd and Goal from the 1 with only 20 seconds to go and no timeouts remaining, Nick Sirianni called a run play that got stuffed by the Commanders, and the clock was running. Hurts calmly but quickly got the offense to the line and called a play on his own that wasn't even in the game plan. He then threw a 50-50 ball to DeVonta Smith, who "Moss'd" Kendall Fuller for a TD.

The poise with which Hurts handled that sequence is stuff you see from 10-year vets.

In Week 2, the ball was spread around, with four receivers compiling at least 69 receiving yards.

Week 3 was Smith's time to shine. He finished with eight catches for 169 yards and the highlight-reel TD shown above. But his play of the day was a high-pointed catch in which he outleaped two defenders.

Smith made leaping catches all throughout training camp. We already knew he ran slick routes and created separation, but he did not show this level of athleticism often during his very good rookie season. The Eagles have two star receivers, and they're going to be a problem for opposing defenses the rest of this season and beyond.

On a day in which Smith stood out, Brown and Goedert also each got into the end zone for their first touchdowns of the season. Goedert was first:

Goedert with his first TD of the season #Eagles #FlyEaglesFly #PHIvsWAS

Nice blocks by Jason Kelce and Isaac Seumalo out in front of the tight end screen, as well as Landon Dickerson, overpowering Jonathan Allen at the line of scrimmage.

AJ Brown with the REACH 😤

Brown even broke out a Batman cape.

AJ Brown scored his first TD with the Eagles. And it was Cape Time

What is "object permanence?" Per WebMD:

If you’ve ever played peekaboo with your little one, you’ve helped them work on object permanence. Your baby is learning that people and objects exist even when they can’t see or hear them. Object permanence is one of the development milestones that your infant will learn during their first year of life.

Object permanence involves understanding that items and people still exist even when you can’t see or hear them.

Wentz does not yet possess this developmental milestone. In the lead up to this matchup, we pointed out that when edge rushers run past Wentz, it's almost as if he thinks they then cease to exist, and won't continue to try to get him. For example:

And sure enough, Wentz walked himself into several sacks today, including this sack fumble by Brandon Graham that led to the Eagles' first touchdown of the day.

This Wentz fumble just activated everyone in the Delaware Valley’s PTSD pic.twitter.com/iVBZCfJP8H

Wentz is in his seventh season in the NFL. He'll turn 30 in December. And he's still making these dumbass plays. He will never learn.

Of course, the Eagles' defensive line should get their share of the credit for getting to Wentz nine times.

Graham had 2.5 sacks, Haason Reddick, Fletcher Cox, and Josh Sweat each had 1.5, while Javon Hargrave and T.J. Edwards each had one. We'll have more on those later in the week.

6) The Chunk Play Award ✈️: The Eagles' end of half drives

For the third straight week, the Eagles put together a long drive at the end of the half and put points on the board. Today's drive went 88 yards in 1:57, and went like so:

The thing that has been impressive about these end of half drives is that the Eagles are stringing together chunk plays. They look a lot like the Chiefs or the Bills or (fill in whatever dangerous offense you like that you have to fear at all times).

7) The 'Stall Out' Award 🐌: The Eagles' second half scoring

Hurts acknowledged the second half woes without even being asked about them.

Jalen Hurts got out in front of questions about the Eagles cooling in the second half.

He says the players’ intensity was right but they just have to execute. He thinks they were close to being better. Hurts said his message to the team is they can fix those mistakes.

There isn't much to nitpick, but by Philadelphia sports law we have to find something.

The Eagles take on their next familiar foe Week 4, when Doug Pederson and the frisky Jacksonville Jaguars will come to town. The early line on that game is Eagles (-7). The Jags blew out the Colts Week 2, and as of this writing they are leading the Chargers on the road 38-10. That won't be as easy a game as it may have looked before the season began.

9) The 'Sit Back and Watch' Award 🍿: The Cowboys-Giants game on Monday night

The Eagles took care of business on Sunday, and on Monday night they'll have the luxury of sitting back and watching to see if the Cowboys and Giants look like they have any real chance of giving the Eagles a run for their money in the NFC East this season. It certainly doesn't look like the Commanders will. #Analysis.

Oh, and hey, the Saints lost to the trash-ass Panthers! As you know, the Eagles own New Orleans' first-round pick in the 2023 NFL Draft. Their loss to a Panthers team that had previously lost nine straight games is a pretty strong signal that they might suck and that pick might be high in the draft.