Handing out 10 awards from the Super Bowl 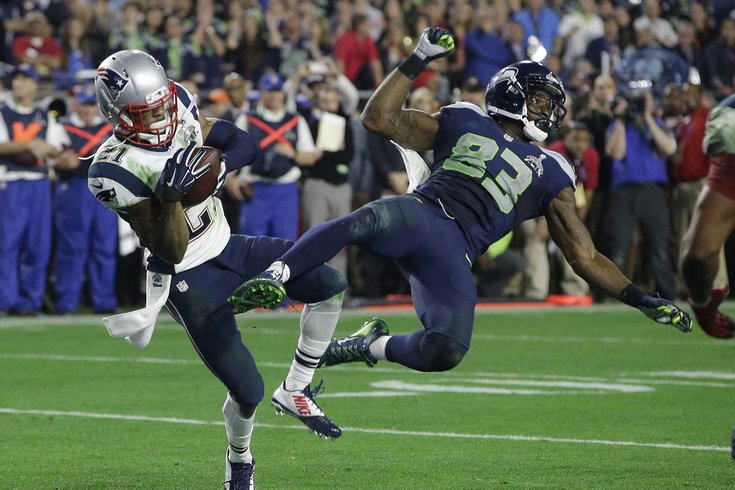 The Patriots *beat the Seahawks in Super Bowl 49. We'll find out soon enough how they cheated, and hopefully that will lead to more scientific analysis from Bill Belichick. But until then, let's hand out 10 awards!

1) The "Most Universally Criticized Super Bowl Moment Ever" Award

The Seahawks, who employ Marshawn Lynch, tried to throw for a TD with under 30 seconds to go and 2nd and G from the 1. People who have never watched football in their lives wondered what the Seahawks were thinking. There's almost no way the spirit of Andy Reid didn't enter the brains of the Seahawks play callers to call that absurdly asinine play.

Seriously... There's no way in hell the Pats were stopping Marshawn Lynch if the Hawks just give him the ball three times. No way. The Seahawks should be repeat champions right now, but, nope. That was simply the most unreal play call I've ever seen in such a huge moment.

Yeah, Edelman had the huge TD catch to give the Patriots the lead with 2:02 to go. BUT... he also took a vicious shot over the middle by knockout master Kam Chancellor, and although his knee hit the ground, he somehow popped back up and was able to run down the field. Edelman is 5'10, 200 pounds of badass.

4) The Think of the Children Award: NBC

After Doug Baldwin scored for Seattle to make the score 24-14, he apparently pooped the football:

NBC, however, decided not to show the replay of that, because our fragile little minds can't handle a little football pooping action. If you're offended by someone pretend pooping a football, I hate you.

5) The Best Thing Ever Award: The two sharks at the halftime show

If I were filthy rich, I would have those two sharks just follow me around wherever I went.

Bennett jumped offsides with the Pats backed up at the 1, and then threw a punch in frustration when the Pats were trying to run out the clock.

After Darrelle Revis was beaten for TD after he ran into a referee, Sherman found the nearest camera and pointed out that it was Revis who was beaten by flashing a "2-4" with his fingers. (Revis' jersey number is 24). Did anyone see Sherman find a camera to flash a "2-1" after undrafted free agent Malcolm Butler made a game-sealing interception.

8) The Asterisk Award: The Patriots

Tom Brady got a new truck for winning MVP of the Super Bowl. Giving Tom Brady a free truck is like my aunt giving me $5 on my birthday. Screw you, Tom Brady.

My 3-year old daughter is better at my job than me. I picked the Seahawks to win this game, and she picked the Patriots.