One year after Philly decriminalized weed, no sign of reefer madness 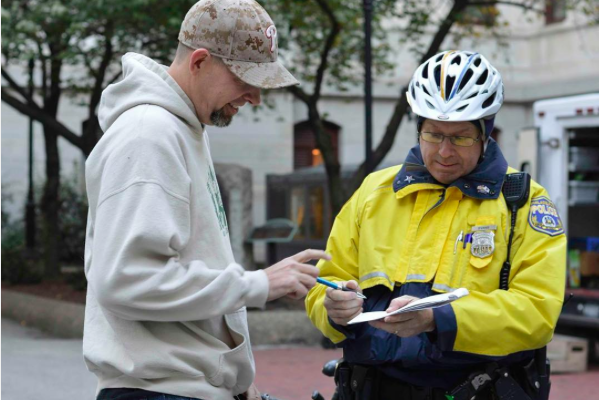 On the first day that Philadelphia decriminalized marijuana, Mike Whiter was issued a citation for smoking in public outside City Hall.

On Tuesday morning, Mike Whiter made an anniversary trip to the scene of his “crime.”

The scene: the courtyard outside Philadelphia City Hall. His crime: smoking a joint. The reason for the sarcastic quotation marks in that last paragraph: On Oct. 20, 2014, Mayor Michael Nutter signed a Council bill into law decriminalizing the possession (and smoking) of small amounts of marijuana. Tuesday morning’s result?

“It went fine,” said Whiter, whose Twitter handle is @PHLStoner (obviously), of a ceremonial endeavor replicating something he did exactly one year ago today. “There were cops everywhere, and nobody said a word.”

That lack of law-enforcement interest in a U.S. Marine Corps combat vet who tokes up to stave off post-traumatic stress disorder flare-ups is emblematic of a 365-day-old trend.

According to a story in Tuesday’s Daily News, Philadelphia police have “cited 73 percent fewer people than they arrested for possessing weed during the same time period in the year prior to decriminalization.” (The story says a lot more than that, so go check it out after you're done reading this.)

“People used to have to smoke in their basement, under a blanket with the fan on. We’re changing that. When I have children one day, they might ask, ‘Daddy, cannabis was illegal?’ and I’d be able to answer, ‘Way back in the day it was.’” – N.A. Poe, marijuana activist

What the shift in priorities means is that, instead of getting arrested, those caught with less than 30 grams of herb get a citation and $25 fine while those who get caught smoking it get hit with a $100 citation.

On the flipside, most of those fines aren’t getting paid, something that leaves mayoral candidate Jim Kenney – who pushed for the decriminalization move while on City Council – considering taking it a step further should he get elected mayor Nov. 3.

“Jim does plan to review the existing marijuana decriminalization law, as we should do regularly with all criminal justice reform, to see how the law can be improved,” said Kenney campaign spokeswoman Lauren Hitt. “We don't have a formal timeline at this point and we won't have anything more specific to share in terms of changes until that review is complete.”

But let’s not get ahead of ourselves – with visions of an Amsterdam district along the Delaware – quite yet.

On this, the first anniversary of Philly’s pot-punishment evolution, PhillyVoice checked in with a couple folks who hope that, one day, decriminalization becomes outright legalization.

They include Whiter, who has “never really had any qualms about smoking in public because, to me, I’m not doing anything wrong.”

Whiter spoke about suicide attempts and being overprescribed pills to help handle an illness that marijuana addresses considerably better.

@foofighters It's about the overmedication of Veterans when they come home from fighting wars. pic.twitter.com/zVRfaTo38t

Whiter is hoping for the outright legalization of smoking marijuana in public.

"Who am I hurting? No one. There don’t even need to be fines,” he said. “Once I found cannabis, I haven’t turned back. That’s why I’m so brazen about it.

“I’ve never been looked at sideways when smoking in public. Police have turned a blind eye to it unless you throw it in their faces. I worry that if people don’t start paying their tickets, that may change, though.”

For his part, N.A. Poe – a pro-marijuana activist who’s organized many a smoke-in in his day – is hosting an anniversary party for this “important holiday” at Connie’s Ric Rac in South Philly Tuesday night.

Poe said it’s been a great year thanks to declining arrests and police cooperation with the new ordinance, something Commissioner Charles Ramsey wasn’t all that keen on during the early stages.

Poe hopes that Kenney – if elected – will do away with the fines altogether, as what Philly has done in the past year stands up as a model for other municipalities across the state where marijuana arrests continue to pile up.

“We’re building a safe haven here,” Poe said. “This progressive move makes Philadelphia a place all of Pennsylvania can be proud of. As soon as Kenney gets warm in his [mayoral] seat, I hope he continues to push the effort forward.”

Poe noted that he’s hosted numerous out-of-town visitors who are “so impressed with not having to worry about things like” getting arrested for smoking weed.

He’s currently investigating how to bring members-only marijuana-smoking clubs to the city and ways to collectively pay off arrestees’ unpaid fines.

“People used to have to smoke in their basement, under a blanket with the fan on. We’re changing that,” he said. “When I have children one day, they might ask, ‘Daddy, cannabis was illegal?’ and I’d be able to answer, ‘Way back in the day it was.’”

Chris Goldstein is Philadelphia's marijuana blogger of note. He said Tuesday that fears voiced by opponents of the move (namely, that people would be smoking weed publicly all over the city) didn't even come close to being realized.

He said public-smoking citations represent a very small fraction of the overall number, giving credit to both the decriminalization effort and the Small Amounts of Marijuana (SAM) program instituted in 2010 by District Attorney Seth Williams' office.

"People aren't out there smoking in crowds, unless they're at an Eagles tailgate," he chided. "None of the fears have played out. In fact, [police spokesman] Lt. John Stanford recently told me that it's been a good thing for helping to close the schools-to-prison pipeline. It doesn't saddle juveniles [who get arrested] with records. Expunging juvenile records is an expensive, time-consuming process."

Goldstein also looked to stats to make his case.

"Philly flipped that; we have significantly more arrests for harder drugs. And, that speaks to a concern that police should be focused on more serious crimes," he said.

Goldstein does remain concerned about lingering racial disparities when it comes to African-Americans being arrested at higher rates than whites. The latter offenders are more likely to get the stern-look, throw-joint-away treatment than the former.

But, as a big-picture advancement, it's been a net positive.

"I think we've shown the rest of the commonwealth a practical model. There's no reason 17,000 people should face a criminal misdemeanor charge for marijuana possession," he said. "The policy should be taken statewide. [Gov. Tom] Wolf has said he's fully behind it. After a year of this, we've set a good example of how it should be taken statewide."

Asked about moving forward with it, Poe likened the effort to advances made by the LGBTQ community, which has continually pushed its agenda forward rather than cooling its heels with each accomplishment.

“If you say anything bad about anybody LGBTQ, you’re a pariah. … Across the country, bold people stand up for what they believe in. Those people can help push this forward. Each step we take, we’re continuing to break ground,” he said, noting cannabis activists can follow that model.

“I want people to come out of the cannabis closet, admitting that they use pot to normalize it,” he continued. “That’s where I want to push it, to hear, ‘I’m a stoner and I use it everyday, but I am also very successful in [the professional aspects of my life, without negative interference from smoking].”

That last note struck a chord with me, considering this is an opinion column written by a guy who calls his personal blog "Philly Blunt."

So, I'll still tell y'all what I told Kenney when he came to Quizzo night in East Falls:

Thanks for championing this cause, and not just because it – hypothetically speaking, wink, nudge – makes some friends of mine feel more comfortable about sparking one-hitters somewhere besides under blankets in basements with fans on.

Nope. What makes this move so special is that it won't saddle folks with a lifelong criminal record for doing something that shouldn't be illegal in the first place. The rest of the benefits are tasty side dishes akin to 2 a.m. chili-cheese dogs eaten while watching "Dazed and Confused."