Hellickson shuts down Nats, 3-0, to give Phillies a winning record 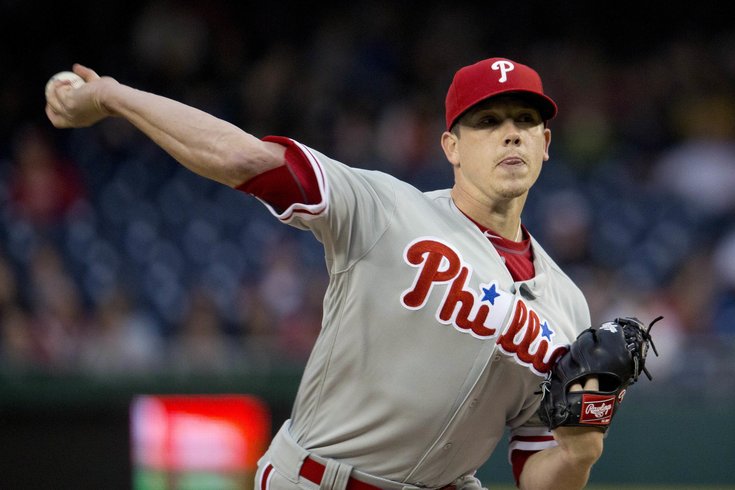 Jeremy Hellickson bounced back from back-to-back rough outings with a strong start against the Nationals that put the quietly-hot Phillies in position to win Wednesday night.

WASHINGTON – If the Phillies hope to continue to be a thorn in the side of their National League East neighbors to the north and south, the New York Mets and Washington Nationals, the two teams expected to battle it out for the division all summer, they’re going to need Jeremy Hellickson to be a stabilizing force in their young rotation.

They’re going to need more starts like Wednesday night and less like the two that preceded it.

Hellickson, who had allowed nine runs on 17 hits in his last two starts, the latter that saw him need 98 pitches before getting pulled with one out in the fifth inning, hurled his best start in a Phillies uniform to lead the team to its fifth win in six games.

"The last two starts were all I needed for motivation tonight," Hellickson said.

Hellickson struck out a season-high eight batters and walked three. After giving up a leadoff double to Daniel Murphy in the second and issuing a one-out walk to Danny Espinosa two batters later, Hellickson retired 16 of the final 18 batters he would face.

Hellickson’s stellar effort lowered his ERA from 5.21 to 3.81 on the young season.

"It’s good to see him pitch that well, he was outstanding," manager Pete Mackanin said. "He threw more fastballs than he has been, and I think that made a difference because he relies a lot on his off-speed Tonight I think he set it up real well, he established his fastball.”

“Pete’s been preaching since Day One that he believes in us," Hellickson said. "We all believe in each other. … So I don’t think this really surprises any of us.”

"People have asked me what my goal was for this year knowing the team I have," Mackanin said. "My goal was to try to play .500 and then we'll go from there. ... The thing I'm real happy about, especially after starting 0-4 when the pitching wasn't real good, the starters were but the bullpen wasn't. Now they've shaped up where I've got a good selection of pitchers I feel pretty comfortable with. And that's the reason we're 11-10. The pitching has been outstanding."

Darin Ruf, starting for Ryan Howard against lefthander Gio Gonzalez, hit a sacrifice fly to end a scoreless tie in the sixth. Cesar Hernandez singled, moved to second on a Tyler Goeddel base hit and to third on a Hellickson sacrifice bunt before scoring on an errant throw from Nats third baseman Anthony Rendon. In the eighth, Carlos Ruiz slugged a two-out home run, his third of the season.

Ruiz also now has as many home runs as the Atlanta Braves roster.

Bryce Harper isn’t leading the baseball world in every offensive category in baseball, it just feels that way. Entering Wednesday’s game, there were actually two players at Nationals Park with a higher OBP than Harper: Daniel Murphy (.462) and Odubel Herrera (.444).

Herrera went 1-for-3 with a single and a pair of walks on Wednesday night. He has reached base in 18 straight games, tying a career high.

Since moving into the leadoff spot on April 20, Herrera has gone 8-for-22 (.367) with seven walks and two strikeouts in six games. It's also coincided with the time the Phillies have won five of six games.

"I like leading off," Herrera said through a translator after the game. "I’m the first one to face the pitcher, so it gives me a sense of responsibility. The more pitches I see, the more the batters behind me see as well. So it’s good I’m doing a good job. Things are working out for me."

After walking 28 times in 147 games as a rookie last season, Herrera already has 21 walks in 21 games this season. He’s also three walks away from tying a franchise record for the month of April: in 2006, fellow Venezuelan Bobby Abreu walked 24 times in 24 games in April.

Herrera’s 21 walks are the most by a Phillies player through the team’s first 21 games since Ryan Howard had 22 in the first 21 games of the 2007 season.

The Phillies lost their most veteran starting pitcher on Wednesday when they announced that 32-year-old right-hander Charlie Morton would have season-ending surgery for a torn left hamstring next week.

The new front office acquired Morton (and Hellickson) over the winter to add established depth to a young rotation. But three weeks into the season, they lost one of the two for the remainder of the season, meaning the rotation will rely on five players under 30 years old for the first time since 2004, when Kevin Millwood, Eric Milton, Randy Wolf, Vicente Padilla, and Brett Myers populated the rotation.

But that fivesome had just one pitcher under 26 (Myers) while this one has three: Aaron Nola, Jerad Eickhoff, and Vince Velasquez. With the Phillies surely keeping tabs on their young pitchers workloads as the season progresses (Velasquez hasn’t thrown more than 100 innings in a season since 2013) is it possible that they could look to add another veteran starter even in mid-rebuild?

“We have plenty of guys,” Rice said. “As the season goes along, you'll see more guys who are maybe beginning their Triple-A careers now, they'll be 70, 80, 100 innings in and you'll feel better about them. We even have a couple of guys in Double-A with major-league experience in (Alec) Asher and Severino Gonzalez. I don't think we're starved for experience.”

With Jake Thompson, Zach Eflin and Mark Appel all at Triple-A, the front office could find a way to transition to an even greener rotation later in the summer, which could also save some of the other arms currently in the rotation.

As for who is coming to take Morton’s place on Friday, the team still hasn’t made the announcement, but it will be left-hander Adam Morgan. He’ll pitch opposite former American League Cy Young Award winner Corey Kluber and the Cleveland Indians on Friday at Citizens Bank Park.