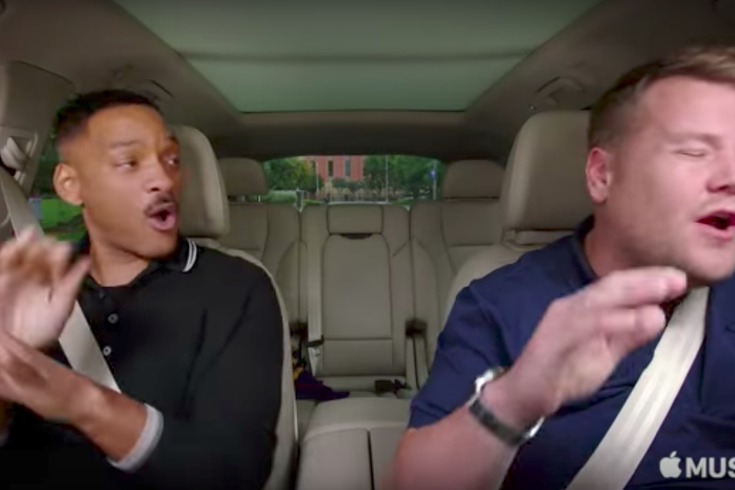 Did Will Smith, shown here with James Corden on the premiere episode of "Carpool Karaoke: The Series," earn a place in the top Summer Bangers of all-time? (Spoiler alert: He and an old friend certainly did.)

The unofficial start of Summer 2019 is upon us. Congratulations for making it this far, everyone.

Among the many things that means – distracted kids counting the minutes till the end of the school year, folks heading down the shore, people heeding or not heeding SPF warnings as they check to make sure the beach is open, etc. – is that Summer Bangers season is here.

But what exactly is a Summer Banger? Simply stated, it's a dope track that reminds people of summers past, and music that makes you feel as free as the season intended.

It's equal parts relaxation and distraction, where one's mind can drift to its happy place and one's body feels the need to get up and groove (or not).

There are new Summer Bangers every year, sure, but there are also timeless classics. So, this post is less about saying which Summer Banger is better than the others as it is a celebration of the micro-genre itself.

A song needn't be released in the summer to be a Summer Banger, nor does it necessarily need that season's name in its title (though many do). The lone prerequisite is that the track is best enjoyed when the weather turns really nice.

It's also hard to forecast what song can rise to these lofty heights. The best Summer Bangers become that naturally but tapping into that je ne sais quoi mood.

For me, as a product of my five-year-stint living year-round down in Sea Isle City in the late 90s into early 00s, the entire Sublime oeuvre perfectly encapsulates this vibe.

What follows in this post will be a collection of songs that rise to this level.

Let us not nitpick the suggestions, but rather embrace the spirit behind them, as Summer Bangers are all about togetherness and celebratory relaxation, not fighting. (Except the "Old Town Road" remix. That song is horrible and will find no quarter here.)

What inspired the idea for this post? Quite simply, my recent discovery of the Anne-Marie banger "2012," which I believed was a new song until due diligence revealed that it was released in 2018.

Still, it stands as MY early summer banger of 2019 as it cheekily hearkens back to noteworthy Summer Bangers of old ("Ride Wit Me," "Bye, Bye, Bye," and "Baby One More Time" among them)

Now, watch the acoustic version and imagine yourself sitting on a deck with a frozen drink (Rum Runner's the G.O.A.T., fwiw) in hand staring off into the distance thinking about exactly nothing of depth:

But enough about me. Many people have tried to forecast what this year’s true Summer Banger will be.

Among their (good) guesses?

• "Sucker" by the Jonas Brothers

• "This Life" by Vampire Weekend

I put a call out for friends and readers to suggest their favorite Summer Bangers as well. Here are those recommendations in no particular order:

Sure, there's a bunch of music up there for you to peruse, but summer's just getting started, so you have time.

In any event, this is the point in the post where we share a 12-track Spotify Playlist of Summer Bangers for you, our dear readers. (Feel free to make suggestions about songs we've obviously missed in the comments.)

Oh yeah, have yourself a great summer!