Here's how the Eagles are going to get Marcus Mariota 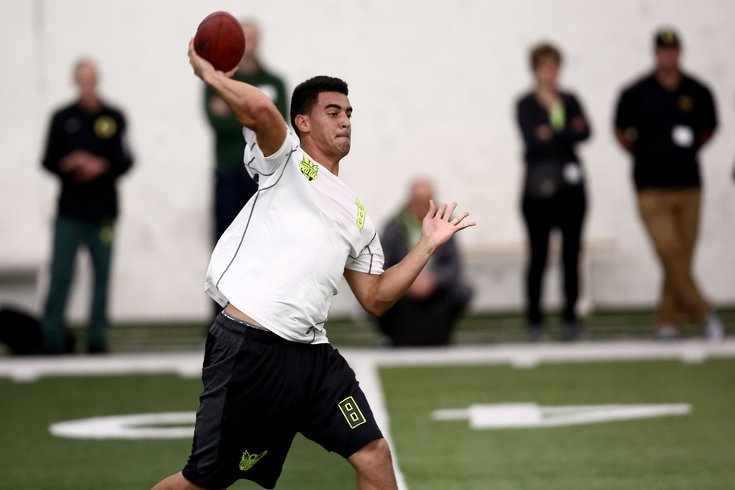 It can still happen.

Sick of the "Marcus Mariota to the Eagles" talk? Sold that Sam Bradford is the Eagles' "franchise quarterback?" If so, stop reading right now. If not, buckle up for some speculation!

Let's take a step back to the wild week of free agency, when Chip Kelly and Rams head coach Jeff Fisher had noted that they had each received an offer of a first round pick for Bradford's services. Admittedly, I was initially skeptical of those claims:

"We were offered first round picks for Sam Bradford" pic.twitter.com/gBRRZjxUh6

Then three days ago, we wrote that NFL Network's Charley Casserly appeared on the Michael Kay Show saying that the Browns were the "mystery team" that offered a first round pick for Sam Bradford. Several other prominent media people have since confirmed Casserly's claim:

Well, if the Browns remain interested in Bradford up until the draft, the Eagles are in a prime position to make a three-way trade with the Browns and Titans for the #2 overall pick, which could land them Marcus Mariota.

The Eagles currently own the #20 overall pick. With the Titans on the clock on draft day, the Eagles could trade Bradford to the Browns for the #19th overall pick they are reportedly willing to deal for Bradford. The 19th and 20th overall picks would give the Eagles 1725 points on the draft value chart, which I'll note below:

1725 points would put the Eagles at right around the 4th or 5th overall pick in terms of comparable value.

Now let's say the Buccaneers, drafting first, are set on taking Jameis Winston first overall, as most suspect they'll do. Meanwhile, the Titans, drafting second, may not be in love with Mariota, who is not a traditional pocket passer. What more would the Eagles need to throw in to get from roughly the 4th or 5th overall pick to that 2nd spot?

Let's say the Eagles have to add their 1st round pick in 2016, and they'll throw in linebacker Mychal Kendricks and slot corner Brandon Boykin for good measure. If you're the Titans, are you turning down what could potentially be five new starters (three #1 picks and two good players) on a team, which oh by the way, is nowhere close to contention and could ruin a rookie QB anyway?

In that scenario, let's recap what the Eagles will have given up to get Mariota, from the vantage point of the time before they made the Bradford trade:

• 2nd round pick in 2016 (originally included in Bradford deal)

On the surface, that may seem like a massive package of players and picks to give up for one quarterback. However, when you look at what the Eagles would be left with, it's really not so bad. Philly would be left with the following:

• A full slate of draft picks in 2015. They would be left with the following picks:

That's a pick in every round (including Mariota at #2 overall) and an extra pick in the 5th round.

• They'd of course be down their first and second round picks in 2016, which is the biggest downside.

• They'd lose three players from the 2012 draft, none of whom were brought in by Kelly, who are all set to have their contracts expire after the 2015 season. And what if the Titans don't want Kendricks or Boykin? How about Fletcher Cox, and they pull back Kendricks, Boykin, and the 2016 first rounder? Or how about Vinny Curry? Maybe Cedric Thornton? Pretty much anyone and everyone is in play, as Kelly noted during a recent press conference, and has shown throughout this offseason. "Tell us who you want, and we'll figure it out," Chip Kelly will say. Probably.

Obviously, there are any number of scenarios that could play out, as teams at the top of the draft order are going to have varying interest in trading back. Maybe the above scenario is Crackpot City.

If the Browns' interest in Bradford is indeed as real as it seems, the Eagles have the ammo to go up and get Mariota if they're motivated to do so. Until the Eagles give Bradford some kind of "franchise QB" type of contract extension, Mariota remains in play. Unless of course the Buccaneers just draft him.