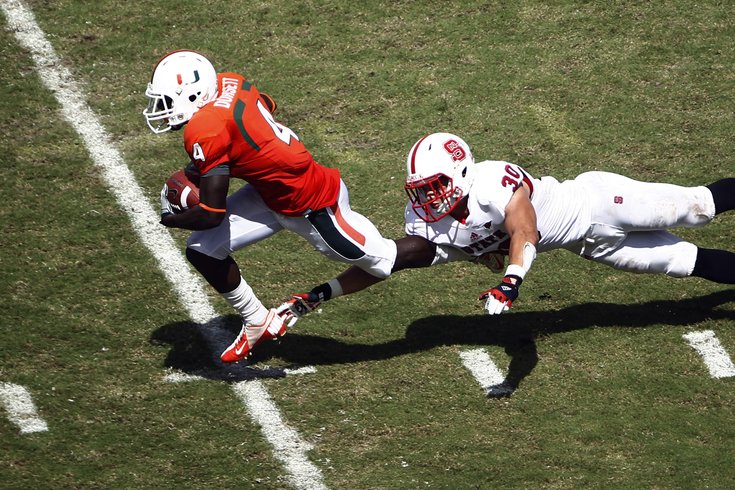 The NFL draft is getting closer, and now that the initial free agency frenzy is over, positional needs are coming into focus a little more clearly for NFL teams. Obviously, if the Eagles were to trade up for a certain Oregon QB, an Eagles mock draft will look something like this:

But... That's no fun for mock draft purposes, so let's envision a scenario in which Chip doesn't move up for his guy.

This is as unsexy as a first round pick can get for the Eagles after the offseason they've had so far, but it just fits. Fisher is listed as a tackle, but many see him as a guard. For the Eagles, he could be their "RGOTP, RTOTF," or "right guard of the present, right tackle of the future." Fisher could replace Herremans at RG in the short term, and then eventually take over for Lane Johnson at RT long term whenever Johnson takes over for Jason Peters at LT.

Fisher tested extremely well at the Combine, running the best 20 yard shuttle and third best 3 cone drill among all offensive tackles competing at the Combine since 1999. His spider chart, via mockdraftable.com:

Fisher would be a perfect fit in the Eagles' zone blocking scheme, and would give them sorely needed youth on an aging offensive line with no depth.

Normally I wouldn't expect an athletic freak of nature like Hunter to last to 52nd overall, where the Eagles will be selecting in the second round. However, the top of the draft is loaded with quality edge rushers. Here are the consensus top 9, sort by sack total (not any sort of ranking):

Are nine edge rushers going to be taken in the first 51 picks? Considering pass rushers are a valuable commodity in the NFL, it's certainly possible, but it would mean that an edge rusher was taken every 5.7 picks.

The Eagles re-signed Brandon Graham to a long term deal to pair with Connor Barwin, so they have their starters in place, but have almost no depth behind them. And it's not the worst idea to load up on players who can get to the QB.

Hunter is drawing comparisons for his size, athleticism, and lack of college production (in terms of sacks) to the Giants' Jason Pierre-Paul. Hunter is 6'5, and he ran a freaking 4.57 40: 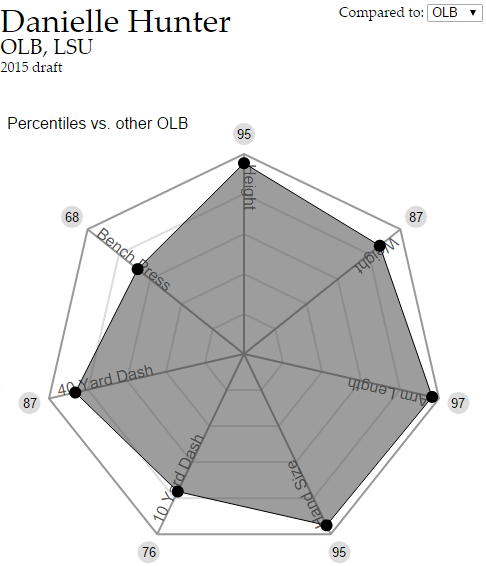 He also has added length because of his 34 inch arms and huge 10 1/2 inch hands. Seeing how Marcus Smith produced (or didn't produce) his rookie season, Eagles fans may not be in the mood to draft another edge rusher "project" early, but can you pass on specimen like Hunter if he's still there in the second round? I wouldn't.

In the 2014 draft was loaded with talent at wide receiver, and a player with a similar skill set as Dorsett went 91st overall. That was Pittsburgh State's John Brown, who was drafted by the Cardinals. The 2015 WR class is thought to be loaded once again, and a guy like Dorsett could be there when the Eagles are picking at 84th overall.

Earlier this offseason, we noted that a falloff in big plays offensively was a part of why the Eagles' 2014 season went wrong.

In 2013, the Eagles set a new all-time NFL record with 99 plays of 20+ yards. It's a statistic the NFL has been tracking since 1991, and when you think about the number of prolific offenses that have been around since then, what the Eagles accomplished offensively in 2013 seems all the more impressive. The "Run and Shoot" Oilers of the early 90's, the "K-Gun" Bills under Jim Kelly, the Rams' "Greatest Show on Turf," Peyton Manning's teams both in Indianapolis and Denver, the undefeated Patriots, the Randy Moss / Cris Carter Vikings, and the Packers and Saints offenses under Aaron Rodgers and Drew Brees all come to mind.

In 2014, however, the Eagles were less explosive. On the season, the they had 75 plays of 20+ yards, which is still a high number compared to other NFL teams, but not near what they were able to do in Chip Kelly's first year with the team.

There was some dude named DeSean Jackson, who the Eagles cut last offseason, who had more than a quarter of the Eagles' 99 plays of 20+ yards in 2013, with 25. In fact, on drives in which Jackson had a 20+ yard reception, the Eagles eventually scored 17 TDs, seven FGs, and missed two FG attempts, for a total of 141 points. The Eagles scored 30.3% of their total points last season on drives in which Jackson made an explosive play.

Dorsett could be a similar type player as Jackson who can take the top off the defense. Check out his speed:

Dorsett's numbers on the season:

Note the yards per catch above. The Eagles have a pair of targets in their passing game who can pick up the slack for recently departed Jeremy Maclin as "volume catchers" in Jordan Matthews and Zach Ertz. Dorsett can potentially be the home run threat who keeps defenses honest and allows Matthews, Ertz and Josh Huff to work underneath.

The Eagles have at least some level of interest in Randall, as he will be one of the first players the Eagles bring in for a pre-draft visit to the NovaCare Complex. Randall makes sense for the Eagles, who like their safeties to be able drop down and cover slot receivers when opposing offenses go with three-WR sets.

Randall led the Sun Devils in 2014 with 106 tackles, and he also had 9.5 tackles for loss, which is impressive for a safety. In his two-year career at Arizona State, Randall filled up the stat sheet, with 177 tackles, 6 INTs (2 returned for TDs), 4 forced fumbles, 12 pass breakups, 15 tackles for loss, and a sack.

However, the big knock on Randall will be his size, at 5'11, 196. Is he just a slot corner, or can he be a safety in the NFL? If NFL teams think he's a safety, his value goes up. The 4th round would be a nice place to land Randall, but it's worth noting that teams over-draft versatile safeties, like the 49ers did a year ago when they selected a similar player, Jimmie Ward of Northern Illinois, in the first round.

Boyle was a versatile player for the Blue Hens, lining up out wide, as an in-line TE, and even occasionally in the backfield next to the QB. He also has the ability to long snap. TE isn't exactly a dire need for the Eagles, but it's a spot where they could look to spend less money in 2016.

Brent Celek's receptions, yards, and first down catches have declined (or stayed the same) in each of the last four years.

Boyle also has a connection to Chip Kelly. "Our offensive coordinator (Sean Devine) came from New Hampshire, so a lot of our plays are based off of their plays," said Boyle, speaking at the Combine. Devine and Kelly were both assistants for 11 years at New Hampshire, and Kelly made occasional trips to watch Delaware play this past season.

Drummond biffed the Combine, which should hurt his stock considerably:

But again, here's a safety with good coverage ability and ball hawking skills who can cover bigger slot receivers or tight ends. However, you don't want him playing centerfield in single-high looks, which limits him as a possible starter in the NFL. He's probably best suited in the dime linebacker role played by Nolan Carroll a year ago.

Smelter tore his ACL late in the 2014 season, so he could still be recovering as NFL teams head into training camp, but in the 6th round, he would represent good value. And obviously, as the free agency period just proved, Chip Kelly isn't shy about taking chances on guys with serious injury histories.

When healthy, Smelter is big-bodied WR at 226 pounds who comes from a run-heavy offense at Georgia Tech. He's a good blocker, and a tremendous athlete with an accomplished baseball background. He is also considered to be a great character guy, via NFL.com:

SOURCES TELL US: "I hate that he tore his ACL. We throw the phrase 'athlete' and 'competitor' around quite a bit in this business, but he embodies that. If he hadn't had a shoulder problem, I think we would be talking about him as a major leaguer right now." -- NFC Area scout

Like Phillip Dorsett above, Smelter averaged over 20 yards per catch in 2014:

Smelter is a player the Eagles could "redshirt" and groom to be a contributor in 2016.

Gwachum played WR at Oregon State, but moved to DE his senior year. At 6'5, 246, with 34 1/2 arms, Gwachum has the size and athleticism that Chip Kelly loves. Gwachum is also thought of as a high character guy, via NFL.com:

SOURCES TELL US "This guy is going to blow some people away with his explosion numbers and teams will love him in interviews because he's a genuinely good guy. As a player, he still needs a lot of time to develop and you better set aside time for that and have a plan for him." -- NFC South area scout.

Again, this is a player the Eagles would have to develop. When you're drafting in the later rounds, you can either go after players who can contribute quickly on special teams, or you can target guys who have a lot of upside, but need a lot of work. Since the Eagles already have more than their share of quality special teamers, why not take a long term chance on a size-athleticism freak?