Timeline: A recap of the Eagles' gains and losses this offseason 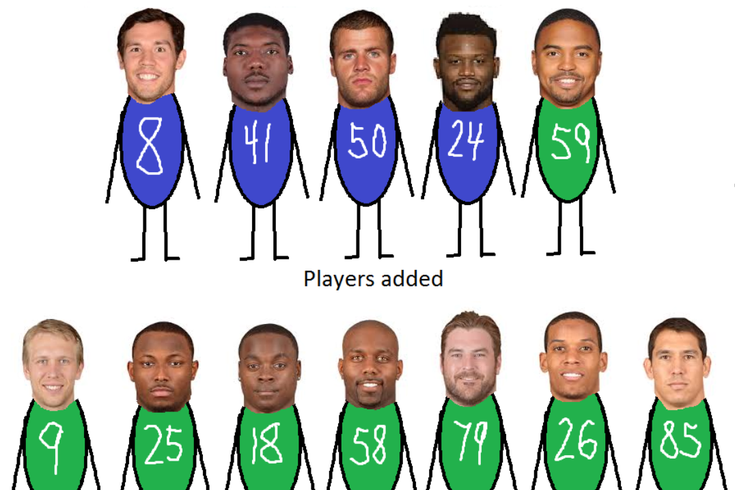 Like it or not, the Eagles have been extraordinarily busy this offseason.

We're not even a full three days deep into the official start of free agency, and the Eagles' roster has changed drastically. I cover the team full time, and it's difficult even for me to remember all the moves they've made this offseason, so let's recap what they've done. Here's a visual aid of the players the Eagles have gained and lost, in stick figure form:

Let's recap everything that has happened, in timeline form:

• Feb. 19: Eagles release TE James Casey: Casey was going to cost $4 million against the salary cap in 2015, which made him an expensive special teams player, and expendable.

• Feb. 26: Eagles release OG Todd Herremans: Herremans was the longest tenured Eagle on the team. He was a staple on the Eagles' offensive line for a decade under Andy Reid and Chip Kelly, playing every position on the line except center. Herremans played in 127 games as an Eagle, and started 124 of them. He missed the final eight games of the 2014 season with a torn biceps. Herremans was set to count for $5,200,000 against the cap in 2014. His release saved the Eagles $2,800,000 of that amount.

• March 2: Eagles sign ILB Brad Jones: A season ago, the Eagles lost starting ILB DeMeco Ryans and their first ILB off the bench, Najee Goode, to season ending injuries. As a result, their lack of quality depth at the position was exposed. Jones has played in 76 games in his career, and has started 36. He has 10 career sacks, no INTs, and just two forced fumbles. Depth only.

• March 3: Eagles release OLB Trent Cole: After the Eagles released Herremans, Cole became the longest-tenured Eagles player on the roster. Cole had a great career with the Eagles, playing in 155 games, and starting 145. He had 85.5 career sacks, which was second all time in Eagles history behind Reggie White. He made the Pro Bowl in 2007 and 2009. Cole was carrying the second highest salary cap number on the team heading into 2015. He was going to count for $11,625,000 if the Eagles kept him. They saved $8,425,000 by releasing him.

• March 3: Eagles release CB Cary Williams: Williams had the fourth highest cap number on the team, at $8,166,668. The Eagles made the no-brainer decision to cut Williams and save $6.5 million of that total.

In return the Eagles received Alonso, who was the PFWA Defensive Rookie of the Year in 2013 and is only 24 years old. He is a three-down linebacker who racked up 159 tackles, two sacks, and four INTs his rookie year. He is also inexpensive. He will only count for $1,172,837 against the cap in 2015, according to overthecap.com. However, Alonso suffered a torn ACL in his left knee in July and missed the entire 2014 season. In college, he tore his right ACL.

Maxwell is the type of CB Seattle's "Legion of Boom" has become known for. He's big (6'1, 207), attacks in the run game, and gets physical with opposing wide receivers. The Eagles have tried (and failed) to collect those kinds of corners the last few years under Chip Kelly and Billy Davis. The Eagles released starter Cary Williams this offseason and are not expected to try to re-sign Bradley Fletcher, both of whom were offseason acquisitions in 2013.

PhillyVoice identified Maxwell as a free agency target in January, when we spoke with Seahawks writer Danny Kelly about Maxwell's game.

• March 8: Eagles re-sign QB Mark Sanchez: Sanchez posted career best numbers with the Eagles in 2014 in completion percentage (64.1%), yards per pass attempt (7.83), and QB rating (88.4). He also did what you hope to get from your backup -- he won enough games for the team to remain competitive. After Nick Foles was lost for the season with a broken collarbone, Sanchez went 4-4 as a starter, 5-4 if you give him credit for the Texans game, when he took over for Foles in the first quarter.

• March 8: Chiefs agree to terms with WR Jeremy Maclin: Maclin tore his ACL during training camp in 2013, missed the entire season, and returned in 2014 with questions about whether he could be the focal point of the passing game after the Eagles released DeSean Jackson. He turned in a career season, catching 85 passes for 1318 yards (15.5 yards per catch) and 10 TDs. While Maclin's production was a pleasant surprise, the downside from a money management perspective was that he had a great season in a contract year, and dumb teams around the NFL overpay for wide receivers seemingly every year. This year it was the Chiefs, who handed Maclin a 5 year deal worth $55 million.

• March 8: RB Frank Gore agrees to terms with the Eagles: Gore will turn 32 in May, but he ran for over 1000 yards in eight of his last nine seasons, with the lone exception being 2010, when he missed five games.

• March 9: Gore changes his mind about signing with the Eagles: Oops!

• March 9: Eagles re-sign Brandon Graham: After being selected in the first round of the 2010 draft, Graham was often tabbed with the dreaded "bust" label early in his career, but he has shown promise in the opportunities he received with the Eagles. Graham is a legitimately talented pass rusher, which is a valuable commodity in the NFL, but he never played more than 524 snaps in one season in Philly. With Trent Cole out of the picture, it will be interesting to see how Graham will produce with more game action.

• March 10: Eagles trade QB Nick Foles to the Rams for QB Sam Bradford: Foles had a breakout season in 2013, throwing for 27 touchdowns and 2 interceptions, leading the Eagles to an NFC East title. In 2014, the Eagles went 6-2 in games Foles started but his play fell off, as we noted in detail back in January.

Bradford has a cap number of $12,985,000 in 2015, according to overthecap.com. The Eagles would not suffer any cap hit whatsoever if they traded or cut him.

• March 11: Eagles sign CB Walter Thurmond: While Thurmond has experience playing on the outside, he played slot corner on the Seahawks' Super Bowl team in 2013. He then signed with the Giants in 2014 to play the slot, but was lost for the season Week 2 after suffering a torn pectoral muscle.

•March 12: Eagles officially sign Ryan Mathews: Mathews is a former first round pick (12th overall) who has had trouble staying healthy throughout his career, as he has played all 16 games in his five year career just once. He missed 10 games during the 2014 season with a sprained MCL early in the season, and then an ankle sprain late. When healthy, Mathews is a talented back. In 2013, the year he stayed healthy, Mathews carried the ball 285 times for 1255 yards and 6 TDs.

• March 12: Eagles sign former Cowboys RB DeMarco Murray: Running behind a very good offensive line, Murray led the NFL in 2014 with 1845 rushing yards, with the next closest player being the Steelers' Le'Veon Bell, who had 1361. That’s a difference of 484 yards. Murray had an enormous workload last season for Dallas, which was a major key to their success. Including the playoffs, he had 436 carries and caught 61 passes, for a total of 497 touches. The Cowboys sustained long drives by repeatedly feeding Murray and converting manageable third downs. The Cowboys’ commitment to the run kept their suspect defense off the field, and made life far easier on Tony Romo, who led the NFL in passer rating.

McCoy out, Murray and Mathews in.