After five seconds in a gender-neutral bathroom, the debate over their existence became patently absurd 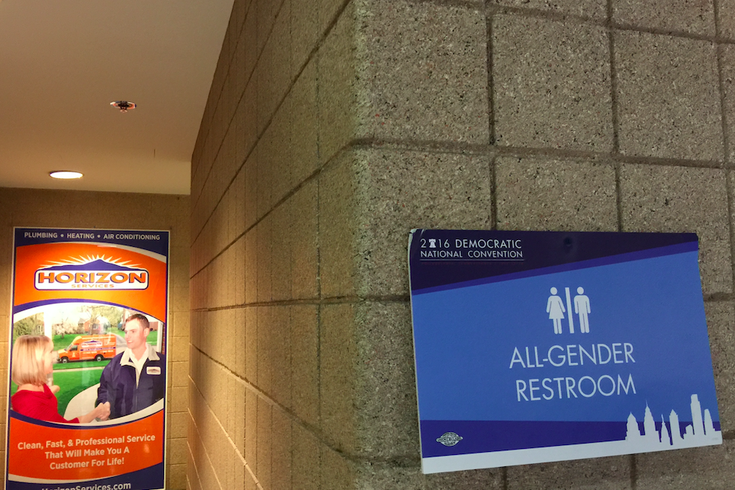 For the Democratic National Convention, there are restrooms for men, for women and for all genders.

I really had to go. So, I left my seat up behind the stage where Hillary Clinton will soon accept the Democratic Party’s presidential nomination.

The closest facility to my section in the Wells Fargo Center was marked with a sign that read “All-Gender Restroom.”

“Why the hell not?” went the inner monologue. “This bathroom’s for you as much as the one a few sections over that features that little cartoon figure of a male."

Here’s what happened when I went inside: Several people were washing their hands in normal sinks as I walked into a normal stall. I closed the normal door behind me, did my business, walked to the normal sinks and washed my hands, flanked by two normal people doing the same.

Here’s what didn’t happen when I went inside: Women didn’t look at me as an interloper; in fact, they acted as if I wasn’t even there. They really had to go, too.

I didn’t see anybody flashing their genitals at children.

I didn’t hear any catcalls or male bashing.

Nobody asked me about my gender; I returned that favor.

It was a normal bathroom experience. I’d have taken my son into that restroom if he was here with me.

In fact, it was markedly more pleasant than a men's room experience at a Flyers game. (And an Eagles game? Yeah, if you're going to make an issue out of human behavior, there's your starting point.)

While it wasn’t a big deal for me, it’s a big deal for someone who prefers this genderless experience to the unnecessary discomfort with being somewhere semi-private among members of a gender with which they don’t identify.

Try it sometime. Unless you’re looking to make hay out of a non-issue, you’ll quickly realize what an egregious waste of time it is to debate the merits of their existence.