Here's where you'll find the PHS pop-up gardens this summer 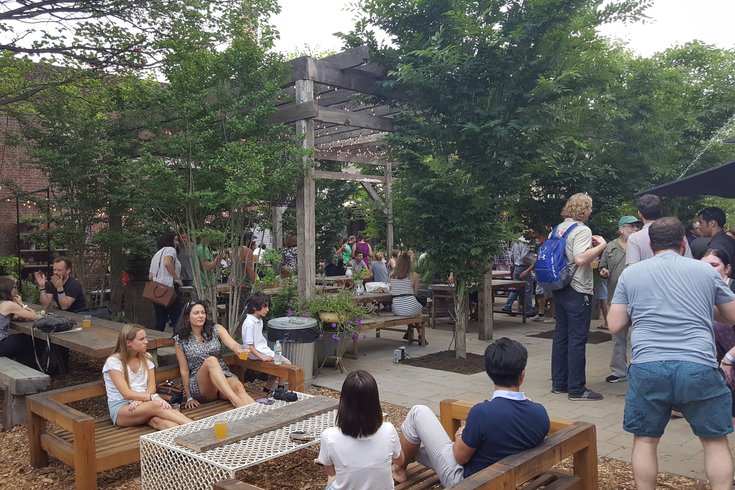 The Pennsylvania Horticultural Society, what has in many ways become the gold standard for pop-up beer gardens in Philadelphia for the past few years, finally announced where and when you can get a brew with a view this summer.

Coming back is the PHS Pop Up Garden at South Street, sprouting up for its third go-'round at 15th and South streets. It will be operated by Khyber Pass Pub and feature — in addition to obvious craft beers and cocktails — sweet potato summer rolls with chipotle-hoisin sauce; Italian charcuterie and cheese with roasted olives; artichoke salad; pickled mushrooms and fig toast; and bacon guacamole and fire-toasted salsa with spicy corn chips.

Events programming through the week includes the following:

• South Street Gulps on Wednesdays, with sangria and cocktails made with Tito's vodka or Hendricks gin

Tallulah & Bird designer Karen Regan has again designed the space, this year with the promise of a "magical retreat" with the cityscape as a backdrop. Aged woods, planters and antiques will mix with use of roses, a canopy of pink crape myrtles, climbing vines of hops, fragrant herbs and a multi-textured perennial mix will make up the aesthetic.

PHS Pop Up Garden at the Viaduct Rail Park

The second pop-up, meanwhile, is the all-new PHS Pop Up Garden at the Viaduct Rail Park. Located at 10th and Hamilton streets, the pop-up garden — a rather poorly kept secret — is meant to highlight the efforts of Friends of the Rail Park to develop the three-mile path into a recreational cultural connector. The purpose of the pop-up garden is to allow Philadelphians to reimagine Reading Viaduct as a revitalized industrial park, as well as take in the history of the three-mile stretch. The pop-up garden is partly supported by a grant last year from the Pew Center for Arts & Heritage and includes partnerships with the Historical Society of Pennsylvania and the Philadelphia Mural Arts Program, to name a few.

For that reason, expect the design — put together by Oakland, California, landscape artist Walter Hood — to be a leading factor in your trip to the Viaduct pop-up. The design will take inspiration from old railroad cars and from a previously abandoned (but unspecified) space along the three-mile path. It will merge the overhead rail structure with green urban space and, in that sense, be a hybrid of what Friends of the Rail Park envision for its final Viaduct ecology and PHS's own botanical vision.

A site-specific sound installation, created by Philadelphia native Abby Sohn, will recall the once-upon-a-time industrial bustle of the rail park, adding an art-installation element to the pop-up. Equipment will also be set up for visitors to play the bocce-like Philadelphia-created game "Philly Stones."

In terms of food & drink, here's what we know:

• The bar boasts six taps and canned beers, plus a wine list and cocktails like a Pimm's Cup and a blood orange margarita.

• Themed dinners are on the way, including a ’90s night with live music

The Reading Viaduct's pop-up garden opens Friday, June 10 at 5:30 p.m. Photos of both gardens will be available in the weeks ahead, according to a PHS representative.