In an op-ed, Chester County man decries War Against Automobiles, but makes little sense in doing so 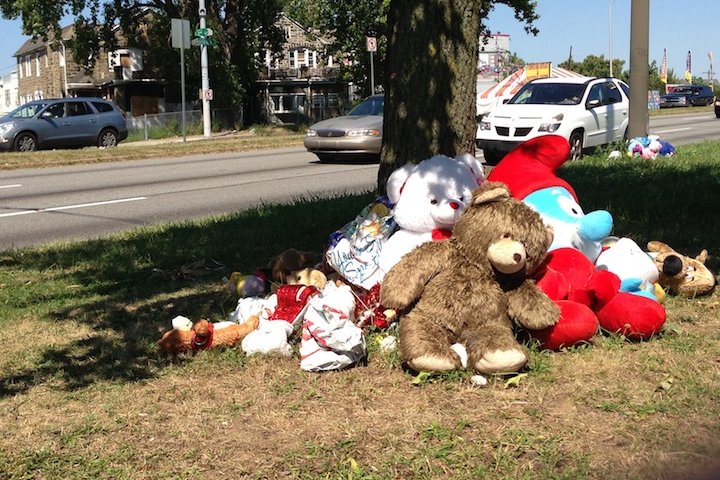 This photo from August 2013 shows a memorial in the median of Roosevelt Boulevard to Samara Banks and her three sons. Banks and her children were struck and killed as they crossed the roadway on July 16, 2013, by a driver who was drag racing.

“The bicycle coalition would have everyone believe that motorists are out to mow down every bike on the road. That is patently false. Drivers mean business. Cyclists should, too.” --PennLive.com reader op-ed, June 6, 2016

On Jan. 12, 2010, a 15-year-old skateboarder was struck by a hit-and-run Nissan Altima driver in Henderson, Nevada. The teenager would luckily survive.

Last Friday, a 47-year-old man was struck by a hit-and-run van driver in Miramar, Florida. The pedestrian would die in the street, a yellow tarp still covering his body when the TV news cameras arrived at the scene.

How do I know about these crimes and tragedies? Over the course of the past six and a half years, I have tracked more than 8,350 initially unsolved incidents of pedestrians (and, to a lesser extent, bicyclists) victimized by drivers operating 2-ton machines.

It’s the kind of thing that happens after a writer is left to possibly die on a cold, dark street. And it’s the kind of thing for which Chester County’s Tom McCarey – “member of a local chapter of the National Motorists Association, a drivers advocacy group” – would likely call me a closed-minded, exploitative bully or whatever else popped up on his “find-a-synonym” search engine.

I’d not heard of Heroic Driver Man (HDM) McCarey until this week when I saw his 620-word screed – headline: “Why is a Philly cyclists' group trying to make life harder for drivers?” – published on PennLive.com.

The link came to my attention courtesy of a Facebook post by a Philadelphian who rode his bike across the country to bring attention to the brain injuries that he, like many others, sustained at the hands of a cowardly driver.

The piece is so whatever-the-antonym-of-eloquent-is – if you have suggestions for that, HDM, my email is hickey@phillyvoice.com – that it should be shared widely.

Let’s dispense with some caveats before going any deeper: I’m not one of those bicycling types. Sure, I pedaled my way all around Philly during the pope’s visit, but I’m a creature of habit/convenience driver through and through.

I like driving. It's a necessity. But what I don’t like are drivers with a sense of “king/queen of the road” entitlement, or their self-appointed protectors who skew facts and realities to suit their dangerous purpose.

We live in a world filled with irresponsible drivers, bicyclists and pedestrians. That creates a world in which HDM and his ilk fill their diaps while screaming about the War Against Motorists.

The McCarey Manifesto features all the telltale signs of a woe-is-us tantrum, a motif crafted after at least a decade of drivers-rule-the-road heroism. (See here, here, here and here.)

It’s also so dismissively condescending toward the family of Jamal Morris – a 27-year-old man who died after an unsolved hit-and-run at 45th and Market streets two months ago – that calling it disgraceful would be a compliment.

The hook is Wednesday’s Bicycle Coalition of Greater Philadelphia rally at the state Capitol. There, Mothers Against Drunk Driving (MADD) will celebrate Pennsylvania’s new ignition-interlock law.

You know, the one that limits the ability of already proven dangerous drivers to drink before they drive.

You know, the one that makes perfect sense and can’t really be argued against unless you’re for drunk driving.

HDM apparently sees the Harrisburg happenings though a different lens, though. To wit:

“There, [the BCGP] will try to exploit the death of Jamal Morris, a bicyclist killed by a hit-and-run driver,” HDM wrote. “In unfairly turning this tragedy into an indictment of all drivers, they will call for red-light cameras, speed cameras, and arming municipal police with radar. None of this would have stopped a cyclist from being hit, and this technology makes highways more dangerous.

“The Harrisburg politicians will respond favorably to this tripe, because they have been working hard to install automated traffic enforcement statewide for a long time, seeking the millions of dollars it funnels into government, stolen from safe drivers.”

“What the bicycle coalition wants is to rid the highways of cars, period,” he writes. “In short, make driving as inconvenient and uncomfortable as possible. Never mind that no red light camera, no speed camera, nor any radar gun has ever stopped one accident from occurring."

Yeah, no. That’s not what they want at all. And that last sentence? An outright lie considering it’s impossible to prove a negative, unless HDM somehow knows what the future holds for anybody who gets pulled over for speeding.

Fine, fine. Maybe things are different on the streets in HDM’s metropolis of Berwyn, but when he types, “What the bicycle coalition wants is to rid the highways of cars, period,” what he’s really saying is, “I am willing to misrepresent reality to make my untenable argument.”

While not providing any arguments that could make the streets safer, even for motorists, HDM neglects to answer the question posed in his headline at a time when hit-and-runs are on the rise in Philadelphia. (What are a couple more bodies on the ground as long as we needn't worry about red-light cameras, amirite?) So, I will.

People drive dangerously in Philadelphia because they can get away with it. Radar capabilities are restricted to state police, and the city’s Accident Investigation Division is understaffed and underfunded. If advocates for bicyclists and pedestrians don’t speak up, nobody will.

If that Philly cyclists group is trying to make life harder for drivers, it’s because they want to make Philadelphia streets safer for everybody, drivers included. And if they save one life while doing so, it’ll mean less blood and brain matter on somebody’s precious windshield.

Again, there are bad drivers, bicyclists and pedestrians. And again, resorting to fact-free rhetoric, and exploiting Jamal Harris' death for a pro-car talking point, will do absolutely nothing to change that.

If you’re inclined to fling spaghetti up on the wall in a wild rant rather than engage in a discussion about pursuing the greater good, you don’t belong in the conversation in the first place.