Hey, Cherry Hill Mall: It's OK to charge people for your Santa exhibit

Amid cries of classism, the shopping center changed its rules, but shouldn't have 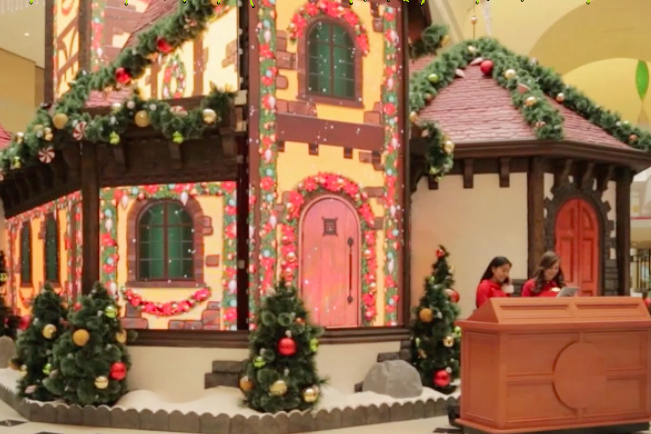 The exterior view of the Adventure to Santa exhibit at the Cherry Hill Mall.

The billboard at the Philadelphia base of the Ben Franklin Bridge speaks to the mashup wonders of the Cherry Hill Mall’s “Adventure to Santa” attraction (feat. lovable characters from the Shrek franchise).

About 20 minutes after driving past it on Tuesday afternoon, my son Louden and I realized that the sight of adventure castle matched the advertising promise, to the extent that a kindergartener grasps sales pitch vs. reality nuances.

The Cherry Hill Mall looks absolutely nothing like it did during my youthful days of roaming past stores and chilling at what was once a Food Court. They classed the joint up big time. Like, to the point that it’s pretty much unrecognizable.

The same goes for the Santa display.

Back when I was Louden’s age – during the late '70s, I walked to school uphill both ways, barefoot in the snow – the place you went to claim you were deserving of any number of presents on your Crayola-scribbled list was low-key chill but for the occasional cries, screams and pee puddles.

There was a long line, a photographer, some people dressed all elfen working a knock-off velvet rope and a jolly old man at the center of it all. You walked up, lap-sat, posed for a photo and – if your parents were so inclined – skipped off with an official “Photo with Santa.”

The optional picture was the only thing that cost money at a time in American history where everybody’s mobile phones didn’t double as cameras that subverted any need for payment. Read: We now live in an era where paying for photographs is nonsense in such a setting because you can just take one yourself.

That’s what was in mind when we approached what’s best described as a gingerbread-electronica castle. Digital screens on the walls of the DreamWorks Dreamplace rotate like an electronic billboard but instead of ads, they focus on holiday decorations, with Shrek making an appearance. 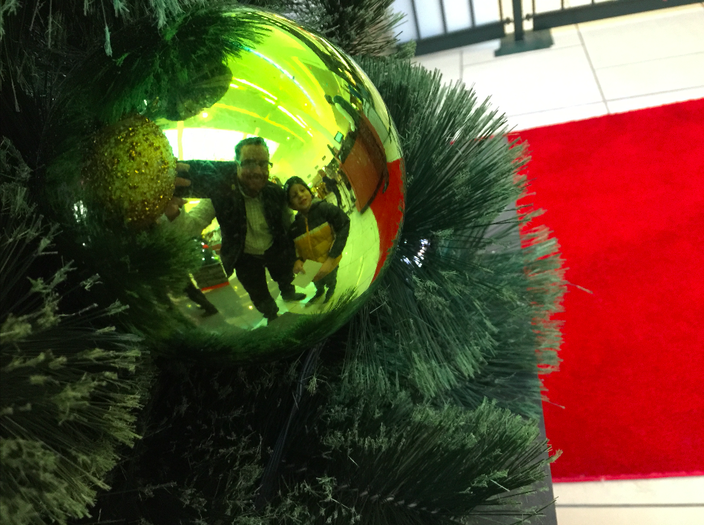 Father and son as reflected in a Christmas ornament outside the Adventure to Santa exhibit at the Cherry Hill Mall. (Brian Hickey/PhillyVoice)

Two ornate doors then open and – after being instructed, by an attraction attendant dressed like a North Pole version of Andre 3000 from Outkast, that photography is not permitted – you enter a Christmas-themed waiting room.

Shrek, Donkey and elves appear on a screen near an arrivals/departures board regarding your virtual, hyper-powered roller-coaster/sleigh ride to meet Santa, who is waiting in the next room. (Full disclosure: Louden was more interested in heading to The Famous & Original King of Pizza than riding a sleigh, so we skipped that part of the voyage.)

With the Santa visit comes a chance to buy photo packages starting at $35, which was a mandatory investment just days ago.

As you more than likely already heard, some naughty comments were bandied about by parents upset that they couldn’t take their children through the Santa Experience free of charge like they could last year.

The outcry – how dare you not offer this experience for free, Cherry Hill Mall, you profit-hungry leeches! – prompted management to curtail the “pay or don’t see Claus” clause.

So on Tuesday, we made reservations on the spot, waited about 10 minutes before the sleigh ride before us ended and went inside. If we wanted to see Santa without paying for photos, we could have. Goodness prevailed, right?

After spending a half hour at “Adventure to Santa,” it struck me as insane that people thought it was ignorant to charge admission.

I hearkened back to a comment from one of those banging the drum of exclusion.

"I find it classist and it creates a divide between children during a holiday which is supposed to be about equality and giving and having everyone participate in the joy of Christmas," said Sulaiha Bitar, one of the Facebook commentators, in an interview Sunday.

Sorry to break it to everybody who held hands and sang Kumbaya when the mall changed course, but that’s just nonsense.

This wasn’t about classism. What it was about was recouping costs – and paying staff – at a decadent amusement offering in the middle of a shopping center that gives absolutely zero products away for free.

That children at the Cherry Hill Mall couldn’t see Santa out in the open is a valid argument until that moment when you realize he’s out in the open 6.3 miles east on Route 38 at the Moorestown Mall.

Some battles are worth fighting. Some stances are worth ceding. On both sides of this one, they weren’t. No, it's not about hating poor families. It's about recognizing that things of value warrant recompense. If that sounds cold and heartless, so be it, even though it shouldn't.

If you want to make a difference around the holidays, feed someone who doesn't have a holiday meal instead of ranting and raving about a mall exhibit charging customers money from the same stack of bills they're throwing away on commercial goods the recipient may or (likely) may not need.

The best things in life aren't free, but who can resist a good Bah Humbug headline or online petition around the holidays, right?