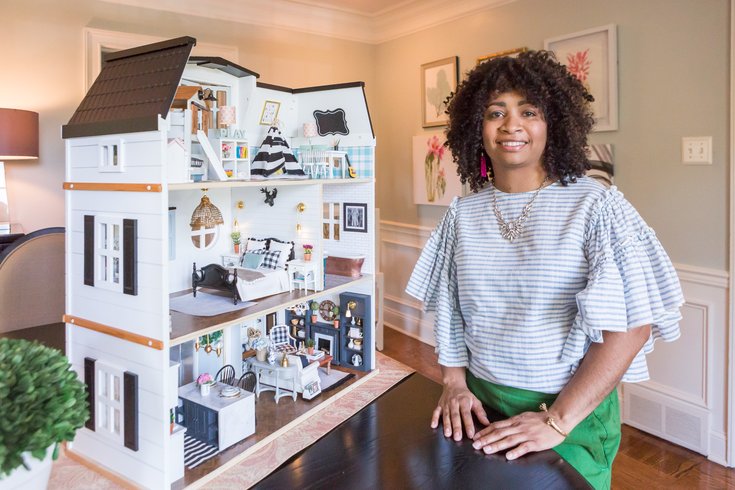 Dr. Kwandaa Roberts, an OB-GYN at Holy Redeemer Hospital in Meadowbrook, poses with a dollhouse that she customized and decorated. The hobby has helped her build a big social media following.

Dr. Kwandaa Roberts has loved interior design since she was a kid watching "This Old House" and collecting Ikea catalogs, but she'd never have guessed that she, too, could inspire people around the world with her own design ideas.

Until this past Thanksgiving, her home in Elkins Park, Montgomery County, where she lives with her daughter, 3, and son, 5, has been the sole canvas for her creativity. With an attic overflowing with end tables, pillows and mirrors, she was constantly buying new pieces for her next project.

“I have to get all the creative energy out of me. And my home usually bore the brunt of it,” she said, with a laugh.

That all changed though when she decided to give her daughter a dollhouse for Christmas. She bought a Melissa & Doug creation from the store, but added special touches to make it cuter. It was so much fun she started to design little dollhouses for herself, figuring it was cheaper than all those home projects.

As a longtime fan of HGTV’s Joanna and Chip Gaines and their home improvement show "Fixer Upper" – it's fifth and final season recently ended – Roberts was excited when she found out that Joanna Gaines had put out a dollhouse as part of her Hearth and Hand collection at Target. Roberts decided to buy one and give it a farmhouse-chic makeover in the Gaines’ style.

“Joanna is like a mogul. I am trying to be her in my life,” said Roberts, 45, an OB-GYN at Holy Redeemer Hospital in Meadowbrook.

As a mom with a busy practice, Roberts didn’t have a lot of time to devote to her passion so she worked on the dollhouses in the middle of the night while the kids were sleeping.

She worked for about two months on the makeover of the "Fixer Upper" dollhouse. Her design incorporated a lot of Joanna Gaines' hallmark elements, such as shiplap paneling, neutral colors, fresh greenery, a giant clock on the mantel and a lot of textures like velvet and buffalo check.

Although Roberts doesn’t consider herself a crafty person, she ended up modifying a lot of basic dollhouse furniture that she bought: the Victorian look didn't fit. She reupholstered furniture and constructed new legs for furniture to better match a more modern style. From scratch, she made a range hood and working light fixtures, drawing a lot of inspiration from Gaines’ TV show.

A tiny bunk bed was modeled off of one Chip Gaines did on the show and even included tiny replicas of the Gaines’ Magnolia Journal magazine and his new book, "Capital Gaines: Smart Things I Learned Doing Stupid Stuff."

But her favorite room in the dollhouse is the bathroom – the one with the copper tub. “I would own it and put in my house if I could afford it," Roberts said. "I just want that copper tub so bad. I would live in there if I could shrink myself down.” 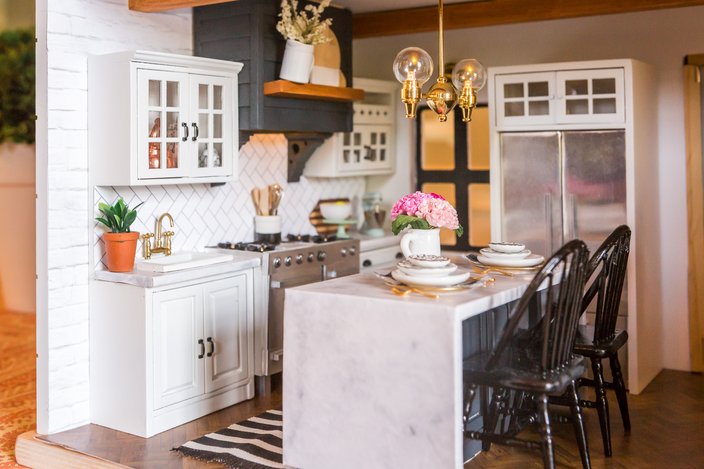 This kitchen from a dollhouse designed and built by Dr. Kwandaa Roberts includes a stainless steel range she built by hand. Her favorite room in the dollhouse, though, is the bathroom with a copper tub. “I would live in there if I could shrink myself down,” she said.

Roberts never planned to post pictures of the dollhouse on social media; it was, after all, for her own entertainment. But after sharing photos of the project with co-workers, family and friends, the positive reaction encouraged her to share her work on Facebook and Instagram.

Roberts created an account for the first time on Instagram, calling it “Tiny House Calls,” just for her dollhouse pictures. She posted them on her birthday in February, and the photos quickly spread like wildfire.

"People have shared how my dollhouse brought back their childhood memories or inspired them to pull out their old dollhouse and work on it with their own daughter.” – Dr. Kwandaa Roberts

HGTV shared and commented on her Instagram posts and other "Fixer Upper" enthusiasts loved the photos she posted on a "Fixer Upper" Facebook fan page.

“I have to thank them because that was what made it go viral," Roberts said. "They made the hashtag #showJo and kept emailing her executive producers and her assistants.”

And then, of course, the piece de resistance was Joanna Gaines herself commenting on the dollhouse. She took a few of the photos and posted them with comments on her own Instagram account via Instagram stories.

Going viral has been an incredible experience, Roberts said.

"I have gotten messages from all over the world about all sorts of stuff, both dollhouse and interior design-related," she said. "People have shared how my dollhouse brought back their childhood memories or inspired them to pull out their old dollhouse and work on it with their own daughter.”

Roberts has even been offered interior design jobs, for real houses, not dollhouses, which is a dream come true for her.