Hoping for a 'clean slate' in Philly 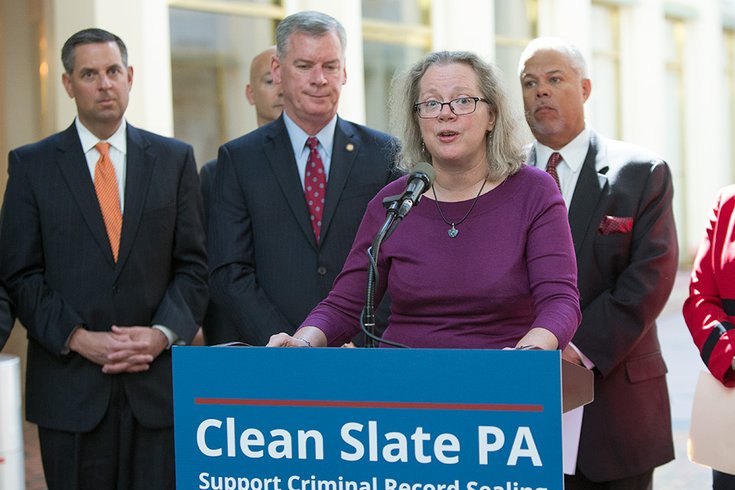 Sharon Dietrich, litigation director for Community Legal Services of Philadelphia, speaks in support of the Clean Slate Act at a recent event.

Nearly 11 years ago, Jay Brown pleaded guilty to misdemeanor theft of a cellphone.

It has haunted him ever since.

Brown, 28, of South Philadelphia, was coming home from a job interview when he was accused of stealing a cellphone.

"That job went out the window as soon as they put the cuffs on me," he said in a recent interview.

Brown was arrested and charged with felony robbery. Brown said he believes his accuser lied, but he was looking at three to five years in prison if found guilty.

Instead, Brown took a plea deal for a lesser charge.

At the advice of his lawyer, Brown pleaded to a misdemeanor theft charge for a year of probation and had to pay for the cost of the cellphone.

Still, his first and only arrest and conviction went on his record.

For nine-and-a-half years after taking that deal, Brown was unable to find steady work. A married father with children to care for, Brown said the incident has haunted him for a decade.

"I say haunting because it's like a ghost from your past," said Brown. "This experience taught me that a piece of paper can ruin your life more than anything else ever could."

According to Community Legal Services of Philadelphia, as many as 30 percent of Pennsylvania residents have a criminal record. For many of them, minor misdemeanor and summary offense convictions hang like a metaphorical albatross from their necks as they look to move on with their lives.

According to Jamie Gullen, an attorney in the employment unit of Community Legal Services of Philadelphia, that could change soon as lawmakers in Harrisburg work on bills that would seal the records of non-violent offenders convicted of misdemeanors and summary offenses.

The bills – Senate Bill 1197 and House Bill 1984, together commonly called the Clean Slate Act – are moving through the Statehouse. The House has referred its portion of the Clean Slate Act to a judiciary committee and the Senate bill is still awaiting a vote. Gullen said the law, if enacted, would have a sweeping effect on those struggling to move on from prior convictions.

"This is revolutionary," Gullen said of the bill.

The measure would seal records of misdemeanor convictions from public view – though still accessible to law enforcement entities – if the individual avoids arrest or prosecution for 10 years from the time of the offense.

Similarly, juvenile adjudications could be sealed after seven years. For summary offenses, records would be sealed even sooner – five years.

An arrest without conviction would be sealed 60 days from the disposition of that case.

But there would be exceptions. Records would not be sealed for violent crimes, crimes that would result in registration as a sex offender, firearm violations, indecent exposure and cruelty to animals. They would, in fact, remain in the public realm for prospective employers to find.

Still, Gullen said, the Clean Slate Act provides a way for individuals re-entering society to get back to work, find housing and put their non-violent criminal issues behind them.

"There is no record too old or too minor to keep someone from getting a job," she said. "Even summary convictions can haunt people for years."

Gullen said the Clean Slate Act has received support from a wide variety of groups, including the US Justice Action Network, which includes organizations as diverse as Americans for Tax Reform, the Center for American Progress, FreedomWorks, the ACLU, Right on Crime, the NAACP, and the Faith and Freedom Coalition.

Locally, she said, the City of Philadelphia supports the Clean Slate Act, as does the ACLU of Pennsylvania, the Broad St. Ministry and the PA Council of Churches and others.

Unlike the current system, where individuals need to obtain a lawyer and work to have their records expunged , the Clean Slate Act would automatically seal records at no cost.

For people with prior convictions – or who were arrested and never convicted – their criminal record follows them as they look for work or attempt to get bank accounts and housing.

"Unfortunately, people don't realize that even if you aren't convicted, or even if you were fully acquitted, that information can still come up," she said.

His theft conviction made it nearly impossible to get work, according to Brown.

He said he would have an internal debate every time he met a prospective employer: divulge his past conviction or keep quiet.

"Nobody makes it easy for you once you have that brand," he said. "If you don't say anything, they fire you because you lied. If you're up front, they see a criminal, a well-dressed criminal."

Brown said he had thought his conviction would be expunged after seven years. It wasn't.

But, how would this help Brown, if he would have to wait 10 years for his record to be sealed? Well, for one, the Clean Slate Act would have cleared the felony charge so employers knew he was only ever convicted of a misdemeanor offense.

Instead, they saw the initial felony charge that did not result in a conviction.

"When they read your record, they don't just see what you were convicted of, like, a misdemeanor. When they pull up that list, it says robbery. All they see is what you were accused of," Brown said.

Brown said he could see how easily some people could turn to a life of crime, simply because a criminal record can keep honest employment out of reach.

"It's like, if I can't get a job, I'm going to go do the one thing that will take me, record or no record: crime," Brown said.

Since then, Brown has worked with Community Legal Services of Philadelphia to clean up his record and Brown's got a job he's proud of as a manager for a cellphone store. Brown said that he's seen how addressing his record has helped him and he believes the Clean Slate Act could do the same for many like him throughout the state.

Senate Bill 1197, part of the Clean Slate Act, is currently awaiting a vote in the state senate.