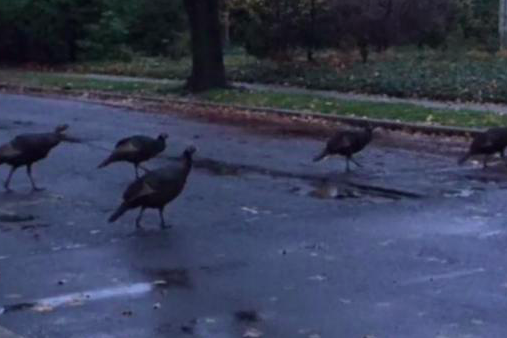 It seems the turkeys are going on the offensive.

Just three weeks before Thanksgiving 2019, scores of wild turkeys have been seen roaming the streets of Toms River in Ocean County. One particularly populated group popped up in the front yard of a Holiday City house like an holiday version of Hitchcock's "The Birds":

According to a report from News12, the groups of turkeys spotted in Toms River have been even larger than the one captured in the above video:

"Just in time for Thanksgiving, an aggressive gaggle of 40 to 60 wild turkeys is terrorizing the community in the Holiday City section of town.

"Residents say that shooing the birds away doesn't help, and that they actually bite. Some say that the turkeys have even broken windows in people's houses."

Toms River's Holiday City area is known, largely, as a community for senior citizens, which makes this payback story even more convincing: the turkeys are exacting their revenge for the collective years of Thanksgivings residing in these houses.

An official with the New Jersey Department of Environmental Protection told News12 that the department is aware of the situation.

Perhaps those survivalist cows over at Chick-fil-a finally have feathered counterparts. Maybe it's viral marketing ahead of an oft-underrated holiday. Or maybe the turkeys really have, at last, had enough.